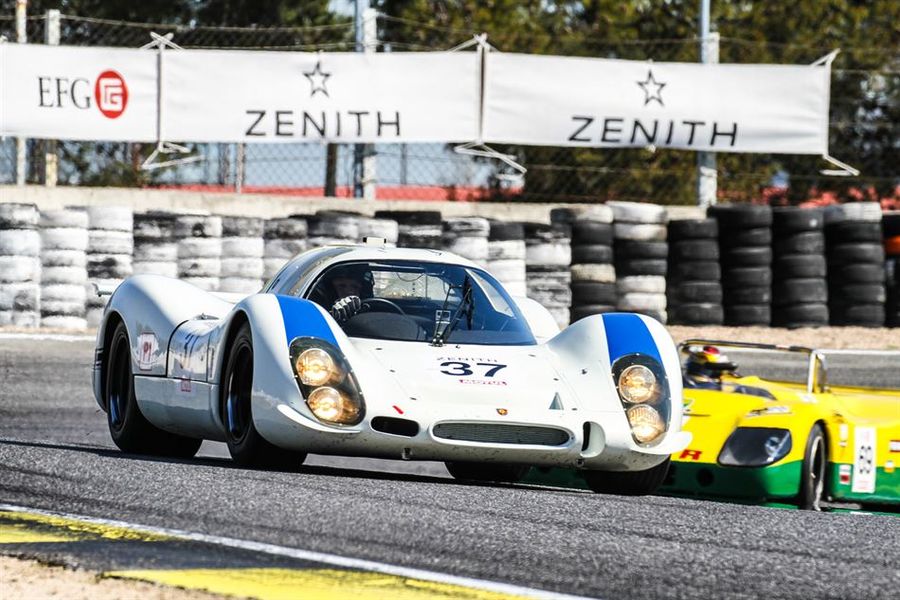 Peter Auto kick off their 2017 historic race season this weekend with the Jarama Classic, three days of track action at the former venue of the Spanish Grand Prix. It features their own series – the two categories of Classic Endurance Racing, the Heritage Touring Cup, Sixties’ Endurance, Trofeo Nastro Rosso and the Group C field, as well as the guesting Trophee Legende, for pre-war Grand Prix and sports cars, and Iberian Historic Endurance series.
Classic Endurance Racing aims to provide a retrospective of endurance races held between 1966 and 1981 and the two grids always feature some great cars. CER1 covers GT cars from 1966 to 1974 and prototypes from 1966 to 1971, while CER2 is GTs 1975 and 1981 and prototypes 1972 to 1981, each having a one-hour race.
The CER1 field for Jarama features Claudio Roddaro in a Porsche 917, Claud Nahum and Bernard Thunier’s familiar Ford GT40 plus the mouth-watering sight of Emanuelle Pirro sharing an Alfa Romeo T33/3. With the usual 911 RS and RSRs, Lola T70s, Chevrons and more in the 28-car entry, it should provide a strong start to the season.
With eight Lolas in the 21-car field the two-litre sports cars are well represented in CER2, while Emanuelle also gets an outing here, sharing a Lola T290. Urs Beck is out in a Porsche 935K3, while gracing the race are no less than three Lancia Beta Monte Carlos.
The Heritage Touring Car Cup is for cars eligible for the European Touring Car Championship between 1966 and 1984. The Jarama entry is dominated by Fords and BMWs, with Escorts and Capris up against 3.0 CSLs and 635 CSis. Variety in the 21-car entry comes solely from a Mustang with Nigel Greensall part of the driving line-up and a Spanish crewed Alfa Romeo.
Jarama has attracted a great Sixties’ Endurance fueld for their two-hour race with 38-cars due to be on track. The field of pre-63 sports cars and pre-66 GTs includes eight Jaguar E-Types, the lone Lister Knobbly of Yvan Mahe, and enough Cobras and Porsche to keep any historic fan happy.
The Invitation Trofeo Nastro Rosso sees some classic – and valuable- cars racing under more ‘gentlemanly’ regulations, and this coming weekend the field features four Ferraris, ranging from a 250 GT, via a 250 LM to a brace of 275 GTBs. Maserati is represented by a 1957 300s and a T61 Birdcage, with Alfa, Porsche and Bizzarinni rounding off the 15-car field.
The Group C series starts the season with just 13-entries, the Jaguar XJR-12 of Shaun Lynn heading the lists. Tommy Dreeland and the rapid Aaron Scott are there in Tommy’s Leyton House liveried Porsche 962, with the car of Michel Lecourt and Raymond Narac the only other Porsche. Four Spices fill out the grid along with cars from March, Rondeau, Cheetah, Tiga and Alba – the field having two 45-minute races.
There are seven entries for the Trophee Legende with two Bugattis, a 35 C and a 51, a glorious Alfa Romeo 8C 2300, two BMW 328s, a Riley and a Delahaye 135s.
Friday sees a day of free practice and qualifying, with more on Saturday morning prior to the first race 1t 11.40. From then on the weekend features 12 races
2017 Peter Auto Jarama Classic