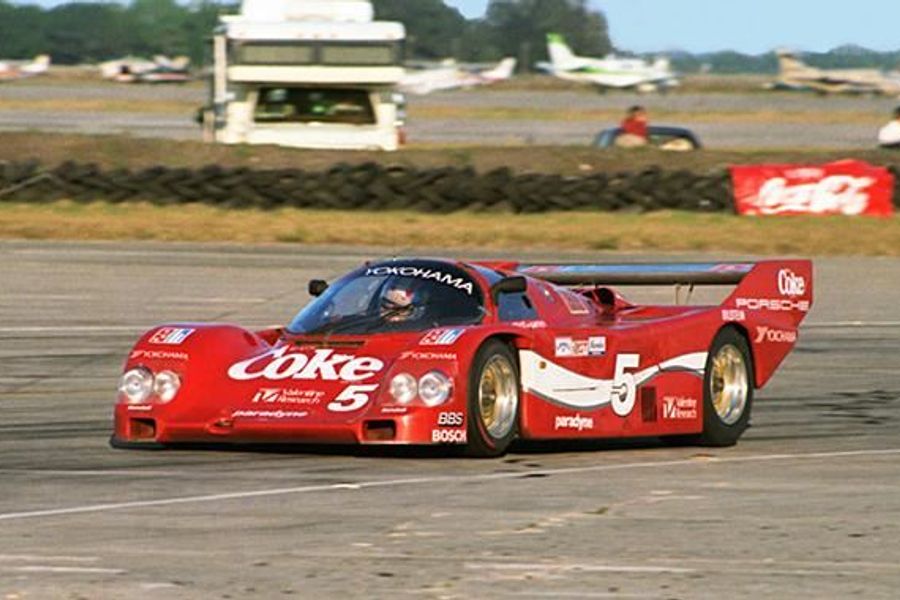 Hans Stuck will be reunited with the No. 5 Bob Akin Motor Racing Coca-Cola Porsche 962 at the inaugural Classic 12 Hour at Sebring, December 1st to the 4th, the race car the German sports car racing legend co-drove to victory in the 12 Hours of Sebring 30 -ears ago.
Modeled after the first two editions of the instantly popular Historic Sports Car (HSR) Classic 24 Hour at Daytona, the Classic 12 Hour - officially titled the Classic 12 Hour at Sebring, Pistons and Props, presented by the Alan Jay Automotive Network - is a racing celebration of both the legendary 12-hour sports car event and Sebring's rich aviation history.
The reunion will be Stuck's second appearance with the 1986 Sebring race winner this year after first reuniting with the 962 in March as the honoree at the  21st Amelia Island Concours d'Elegance in March. The 962 was awarded the Amelia Island event's prestigious Spirit of Sebring Award for the car best representing the spirit of the 12 Hours of Sebring race.
Southern Florida-based historic racing competitor Jerry Vento owns the No. 5 Porsche and has been instrumental in arranging for both Stuck and the 962 to appear at the Classic 12 Hour.
Considered one of the greatest victories for the Bob Akin Motor Racing team, which was a standard-bearer in 1980's IMSA Camel GT competition, the Sebring-winning No. 5 Porsche was 962 chassis No. 113. The 962 was first raced in July of 1985 before winning at Sebring the following March. The Porsche's competitive prime lasted one more season, and No. 113 was last raced at Sebring in 1987.
Stuck, who co-drove to the 1986 Sebring victory with team owner and driver Bob Akin and Jo Gartner, remains today the only surviving driver of the winning trio. Sadly, Gartner was killed later in 1986 competing in the 24-Hours of Le Mans, a race that Stuck won for the first time in his career co-driving with Derek Bell and Al Holbert. Akin passed away in 2002 from injuries sustained in a racing accident at Road Atlanta.
"To have the chance to remember one of the greatest victories in the history of the 12 Hours of Sebring 30-years after Hans Stuck, Bob Akin and Jo Gartner celebrated the win is one of the magic moments the Classic 12 Hour at Sebring is all about," said HSR President David Hinton. "We are delighted that Hans and one of the most memorable Porsche 962s will be joining us for the inaugural edition of what promises to be an incredible event."
Stuck's 1986 12 Hour win was his second at Sebring, splitting overall victories in 1975 in a factory BMW CSL, co-driving with Brian Redman, Allan Moffat and Sam Posey, and 1988 in a Bayside Disposal Racing Porsche 962 that he shared with Klaus Ludwig. Stuck also co-drove to a rare second-straight win at Le Mans in 1987, once again teaming with Bell and Holbert.
Following the format established by the successful Classic 24 Hour at Daytona, the Classic 12 Hour at Sebring will feature six different Run Groups showcasing race cars from similar eras competing in different classes. Additionally, the Sebring event weekend includes the season-ending events for the 2016 HSR sprint and enduro series, including the year-end awards celebration.
Sebring's motorsports heritage began with the running of the Sam Collier Six Hour Memorial Grand Prix on December 31, 1950. Founder and Promoter Alec Ulmann then established the first 12 Hours of Sebring in 1952. The race quickly evolved into one of America's most important international road racing events.
The Classic 12 Hour at Sebring, Pistons and Props, is also a celebration of the lasting connection between legendary race cars and Sebring's rich aviation history. The on-track and on-the-runways Classic 12 Hour celebration pays tribute to both the legendary auto race and historic Hendricks Field, the iconic military and civil aviation facility on which the 12-hour event is run every year.
Still in part an active airport, the Classic 12 Hour, Pistons and Props, will see vintage aircraft land on one of the Sebring runways and taxi into the paddock to be displayed right alongside the historic race cars. A group of race car drivers will be asked to judge the planes for "best in show" and much more.
BMW CSL Founder and Promoter Alec Ulmann Classic 12 Hour at Sebring Al Holbert 24-Hours of Le Mans No. 5 Bob Akin Motor Racing Coca-Cola Porsche 962 Pistons and Props at Sebring HSR President David Hinton Bayside Disposal Racing Porsche 962 Derek Bell Southern Florida-based historic racing competitor Historic Sports Car (HSR) Classic 24 Hour at Daytona inaugural Classic 12 Hour Klaus Ludwig Brian Redman 962 chassis No. 113 21st Amelia Island Concours d'Elegance Sam Posey Allan Moffat Jerry Vento Sam Collier Six Hour Memorial Grand Prix Jo Gartner Bob Akin Motor Racing team Bob Akin 1986 Sebring race winner 1988 Hans Stuck