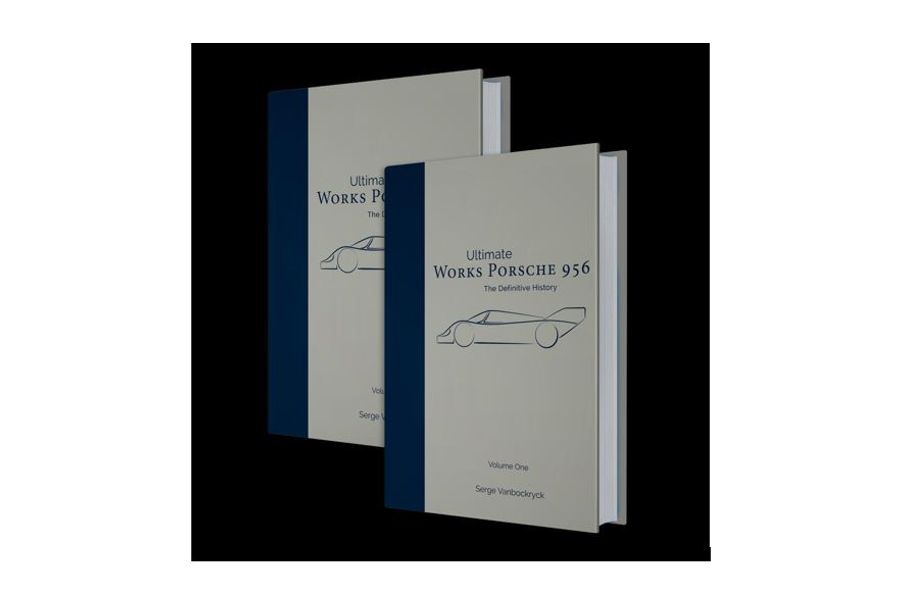 The second title in Porter Press International’s Ultimate series, Works Porsche 956 – The Definitive History, tells the story of the most successful of all purpose-built racing cars. This two-volume production focuses on the works-entered 956s, which almost always ran in the iconic blue-and-white colours of sponsor Rothmans, and is written by Serge Vanbockryck, one of the world’s foremost authorities on the subject.

In the decade following the 956’s launch in 1982, Porsche’s Group C racer and its long-wheelbase derivative, the 962, swept to five consecutive world championships and repeatedly won every classic sportscar race: the Le Mans 24 Hours seven times, the Daytona 24 Hours six times, and the Sebring 12 Hours four times, with victories in 39 World Championship events and 55 IMSA races.

Author Vanbockryck has been gathering and documenting data for three decades on all 956 and 962 races and tests. His painstaking research for this book included sifting through thousands of pages of period documents in Porsche’s archives in Stuttgart and interviewing dozens of people. The result is the telling of the 956 story with unprecedented detail and fresh insights.

The authoritative text is accompanied by a comprehensive selection of period photographs, some showing early design and wind tunnel models and prototypes, many previously unpublished.

This publication extends to 800 pages across two volumes, presented in a slipcase. Production will be strictly limited to 956 copies.

Works Porsche 956 – The Definitive History will be followed in 2020 by a second two-volume production which looks at the works Porsche 962s.

- The 956’s creation and development, led by Norbert Singer and his team, through the design stages and wind tunnel models that resulted in prototype construction and testing at Porsche’s Weissach track.

- How the 956 dominated endurance racing from the outset in 1982, taking the top three places in the Le Mans 24 Hours and winning the World Endurance Championships for manufacturers and drivers, the latter for Jacky Ickx.

- The second season, in 1983, when Porsche retained its championship titles – and when the works team’s experienced drivers were joined by the youthful and daringly fast Stefan Bellof, who famously took pole position at the Nürburgring but then crashed out of the race because of over-exuberance.

- The 1984 season, in which Porsche boycotted Le Mans in a protest about last-minute rule changes, but nevertheless won a third manufacturer’s championship.

- The 1985 season, when the 956’s evolutionary successor, the 962C, was now the works team’s weapon of choice, with 956s occasionally pressed into service as stand-ins and extras.

- Definitive chassis histories of every works 956, with technical details – everything from gear ratios to compression ratios – for every test and race.

- The background relationship between sponsor Rothmans and the works Porsche team, and the innovations Rothmans brought to the sport by filming with on-board cameras and televising race action worldwide.

Serge Vanbockryck started his career in the late 1980s as a journalist and photographer, reporting on endurance racing for European newspapers and magazines. In the mid-1990s he left journalism for public relations and marketing, working in Formula 1, the World Rally Championship, and at Le Mans with brands including Marlboro, Lucky Strike, and Toyota. Since 2000 Serge has been European PR coordinator for GM’s Cadillac LMP, Corvette GT and Chevrolet WTCC programmes. He is a regular contributor to British monthly magazine Racecar Engineering and German monthly Sport Auto, and is co-author of the official Porsche Rennsport Reunion programmes.