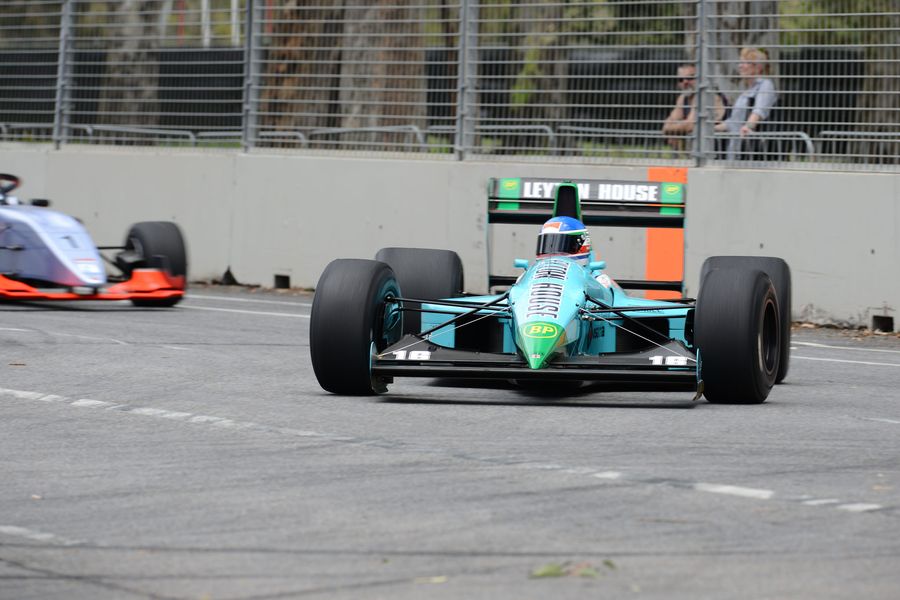 Ivan Capelli will have to wait another day to reclaim his Victoria Park Sprint Circuit lap record, falling agonisingly close of dethroning Tim Slade today at the Adelaide Motorsport Festival. The Italian came within 0.05s of the 43.03s benchmark set by Tim Slade last year, his 43.08s flyer set in the first Formula One session not quite good enough for the Leyton House March driver.

The afternoon session was curtailed early, meaning Capelli will have to wait nearly 24 hours before having another crack at reclaiming the benchmark. Cooler conditions expected for Sunday will play into his favour with Sunday’s weather predicted to be perfect for lap record-setting performances.

The classic Formula One stars and cars were again a highlight of today’s action at Victoria Park. Josh Kean (Footwork FA15) was second fastest of the F1 machinery while former Gold Star champion Tim Macrow impressed in the Adelaide debut of the brand-new S5000.

More than 200 cars took to Victoria Park today in a celebration of all things motorsport and motoring – including a tribute to Porsche’s 70th birthday.

A pair of Porsche 962 Le Mans Sports Cars took to the track for several demonstration runs, giving fans a taste of what it was like at the famous endurance race in the 1970s and 1980s. Two grids of varying Porsche models then lapped in the Porsche Rennsport and 70 Years of Porsche sessions – from classic 911s to current Carrera Cup racers.

Historic Touring Cars from several eras of Australian Motorsport took to the circuit, from Group C and A cars from the 1980s to more familiar shapes from the formative years of the Adelaide 500 Supercars event in the late ‘90s.