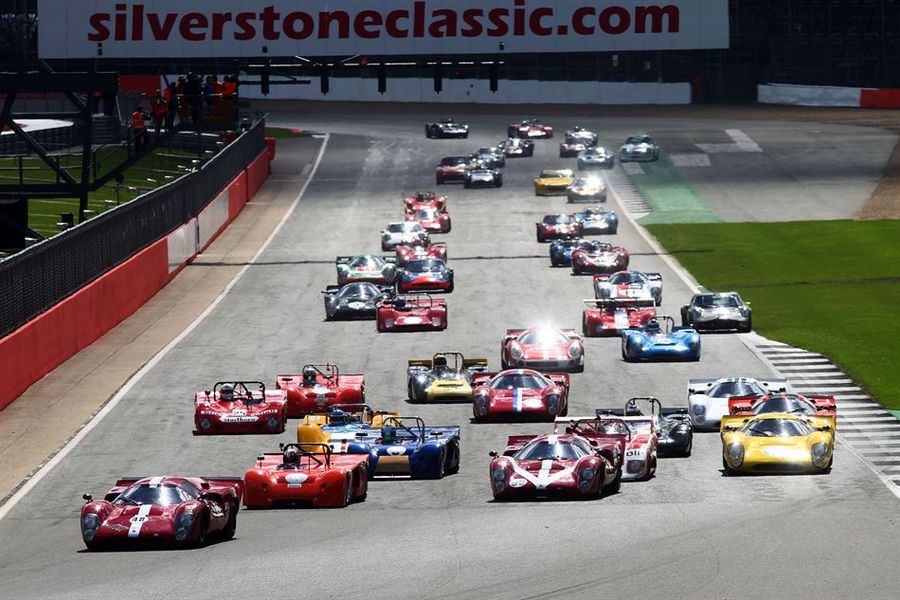 The historic season in full cry now with Le Mans Classic followed by the Goodwood Festival of Speed and this coming weekend the mighty Silverstone Classic. The three-day event (20th-22nd of  July) features a 21-race programme staged on the famous 3.7-mile Grand Prix circuit with again in excess of 1,000 entries, with many categories featuring oversubscribed grids.

Entry gets you access to an infield (and outfield!) packed with car clubs, stalls, the fairground and of course the evening musical entertainment.

So, if you are teetering not eh edge of decoding what to do this coming weekend, here is a taste of just some of the highlights of the weekend:

This year’s schedule also celebrates 60 years of Formula Junior with an incredible record turn-out of front- and rear-engined mini-F1 cars and also sees the Silverstone Classic debut of an exciting new Masters Endurance Legends grid. This introduces an array of superfast prototypes and GTs that competed in major endurance races  as recently as 2012. Providing some star quality, Olympic legend and self-confessed petrol-head Sir Chris Hoy is racing one of them.

The opening Masters Endurance Legends encounter is one of three spectacular sportscar showdowns revving up on Saturday evening under the evocative ‘Daytona at Dusk’ banner – thus honouring America’s most famous 24-hour endurance race which takes place annually in Florida.

This year’s Classic has particular significance as Silverstone is celebrating its 70th anniversary. It was in 1948 that the former RAF airbase hosted its inaugural event: the RAC International Grand Prix, the country’s first major motor race post WW2.

The factory-entered Maseratis of Luigi Villoresi and Alberto Ascari dominated on a circuit that was somewhat different from today’s state-of-the-art facility. It followed old runways and perimeter roads and was marked out with oil drums and straw bales. At certain points drivers actually hurtled towards each other from opposite ends of the same runway!

Commemorating that first event, this weekend’s Silverstone Classic will present a special display of 1948 and period Grand Prix cars including one of those race winning factory-entered Maseratis, plus an on-track parade. Adding to the celebrations, more than 100 great GP cars from past eras will be in action throughout the weekend, the majority of them racing in either the pair of Adrian Flux Trophy races for Pre ’66 Grand Prix Cars (HGPCA) or the two FIA Masters Historic Formula One (1966-1985) showdowns.

One of the country’s most popular and enduring race series – the MSA British Touring Car Championship – is marking its 60th birthday with a star-studded official celebration at the Silverstone Classic.

A special race programme on Tin Top Sunday (22 July) features four incredible touring car grids, spanning cars from the late 1950s right up to 2005 with more than 150 icons that have either raced in the BTCC or represent models that have. Look out for the Gallet Trophy for Under 2-litre Touring Cars (pre '66), Transatlantic Trophy for Pre '66 Touring Cars, Historic Touring Car Challenge ('66-'90), and JET Super Touring Car Trophy ('70-2006).

Furthering the celebrations John Fitzpatrick, the 1966 BTCC champion, and Jason Plato, who holds the series’ race victory record with 98 victories, will front a sparkling Diamond Jubilee BTCC Anniversary Parade on Tin Top Sunday. The birthday cavalcade will include 60 standout saloon and touring cars from past and present eras including last year’s title winning Adrian Flux-sponsored Subaru Levorg and an Austin Westminster as raced by the late Jack Sears to the inaugural crown in 1958.

Race and Classic Cars Under the Hammer

For those either looking to join the thriving classic car movement or to enhance their own collections, Silverstone Auctions is hosting its biggest ever sale at the Classic. The three-day auction sees a collection of 149 road and racing cars going under the hammer on top of some highly collectable items of automobilia.

Headlining the road car sale is a stylish and very rare 1958 Mercedes 300SL Roadster, one of only 1,858 ever built – it is expected to sell for close to £800,000. Other interesting lots include a 1975 Range Rover Classic once owned by the Royal Family, an exquisite right-hand-drive 1972 Ferrari Dino, a 1993 Porsche 911 Turbo 3.6s from the Sultan of Brunei’s stable and 2014 Bentley Continental GT Speed from the private collection of Sir Elton John CBE.

There are some prized racing cars coming under the hammer, too. On pole position is a Ford Sierra RS500 Cosworth in coveted Kaliber livery from the BTCC in the late eighties and a 1962 Jaguar E-type Series 1 – both, of course, are cars that could be raced at the Classic!