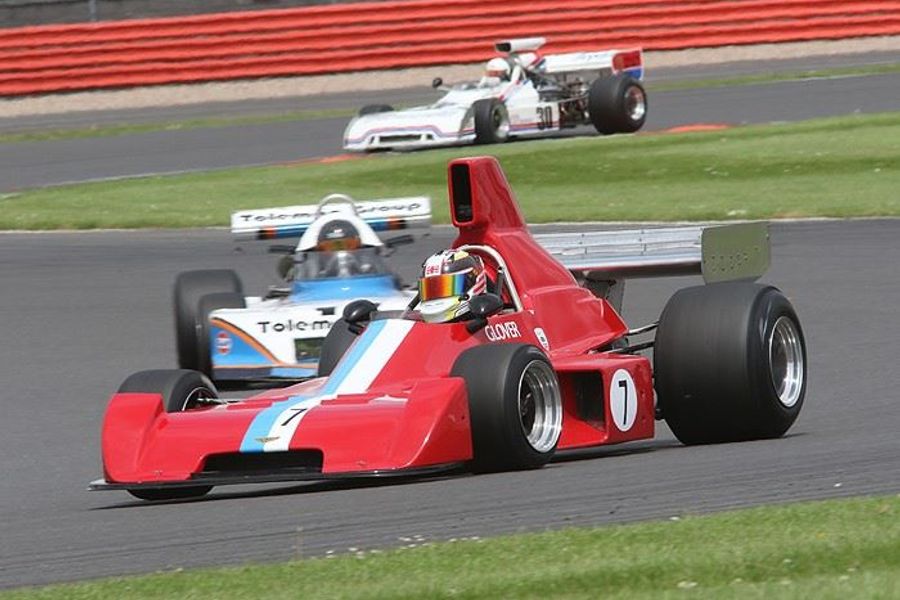 A fantastic total entry of nearly 400-cars will pack out the paddock at the Historic Sports Car Club’s International Trophy meeting on the Silverstone Grand Prix circuit next weekend (Saturday/Sunday 20th and 21st of May).

A full programme of racing includes the opening race of the season for the HSCC Pre ’80 Endurance Series, with a tremendous 30-car field, a capacity grid of 54 Historic Formula Fords, the excellent GT and Sports Car Cup and a double-header for the Derek Bell Trophy featuring Formula 1 and Formula 5000 single-seaters.

A fine grid of cars will contest round two of the Historic Road Sports Championship, with four Morgan Plus 8s aiming to set the pace. At Donington Park Will Plant scored a debut HRS win but back on the grid for Silverstone will be 2015 champion Kevin Kivlochan in his Plus 8.

Saturday’s Historic Formula Ford Championship race has an incredible entry of more than 60-cars and the grid contains more than a dozen potential race winners and podium finishers.

When the season kicked off at Donington Park, defending champion Callum Grant won the narrowest of victories over Michael O’Brien. That battle will rejoin and fellow former champions Benn Simms, Sam Mitchell and Nelson Rowe will be right in the hunt. So, too, will be Benn Tilley, Richard Tarling, Cameron Jackson and many more.

More than 30-cars will contest round two of the 70s Road Sports Championship as a horde of contenders aim to prevent Charles Barter repeating his Donington Park victory. Barter won in his familiar Datsun 204Z after a mighty battle with the Lotus Europa of Jim Dean. Dean will be out to turn the tables at Silverstone and is one of four Europa-mounted racers.

Another fine grid of single-seaters will assemble for a double-header that brings together the Classic Formula 3 Championship and the URS Classic Formula Ford 2000 Series.

The Formula 3 season opened at Donington Park with a commanding victory for Gaius Ghinn in the Ralt RT3. Paul Smith (Ralt RT3) and Ben Tusting (Martini MK34) led the chase that day, while more potential front-runners at Silverstone include reigning champion Simon Jackson (Chevron B43).

Bringing a welcome extra dimension to the HSCC’s regular race categories is the GT and Sports Car Cup. The 90-minute contest is likely to be between the AC Cobras and the Jaguar E-types and the Cobra contingent is headed by Leo Voyazides and Simon Hadfield. Leading the E-type challenge, fresh from the podium at Donington, is John Clark with the very rapid Phil Keen alongside.

In the best tradition of the International Trophy meetings of the 1970s, the Derek Bell Trophy will put Formula 1 and Formula 5000 cars into competition in a pair of races.

Heading the entry are the 1978 Fittipaldi F5A of Max Smith-Hilliard and the March 721 of David Shaw and challenging the Cosworth DFV-powered Grand Prix cars will be eight Formula 5000s using thundering 5-litre Chevrolet engines.

A wonderfully diverse grid of sports-racing and GT cars will contest the opening hour-long race in this season’s HSCC Pre ’80 Endurance Series. Undoubtedly the benchmark car is the DFV-powered Lola T282 of Leo Voyazides and Simon Hadfield.

The final race on Saturday brings together two HSCC single-seater categories as the Classic Racing Car Series and the Historic Formula 3 Championship share a grid. On Sunday afternoon the Historic F3 cars will have a stand-alone race.

Closing the programme on Sunday is round two of the Historic Touring Car Championship. Jack Drury was the star of Donington Park with a debut victory at the wheel of the Ford Falcon built by his father Terry.

The Guards Trophy is one of the HSCC’s longest-established championships and a field of more than 40 cars will contest a 40-minute race on Sunday. The Chevron B6/B8 design is the car to have in the Guards Trophy and eight of them will race at Silverstone, topped by Charles Allison, Philip Nelson and James Schryver and his uncle Michael. The GT division has added spice with the presence of the stunning Shelby Daytona Cobra of Leo Voyazides and Simon Hadfield to take on the TVR Griffiths of Mike Gardiner/Dan Cox and Mike Whitaker.