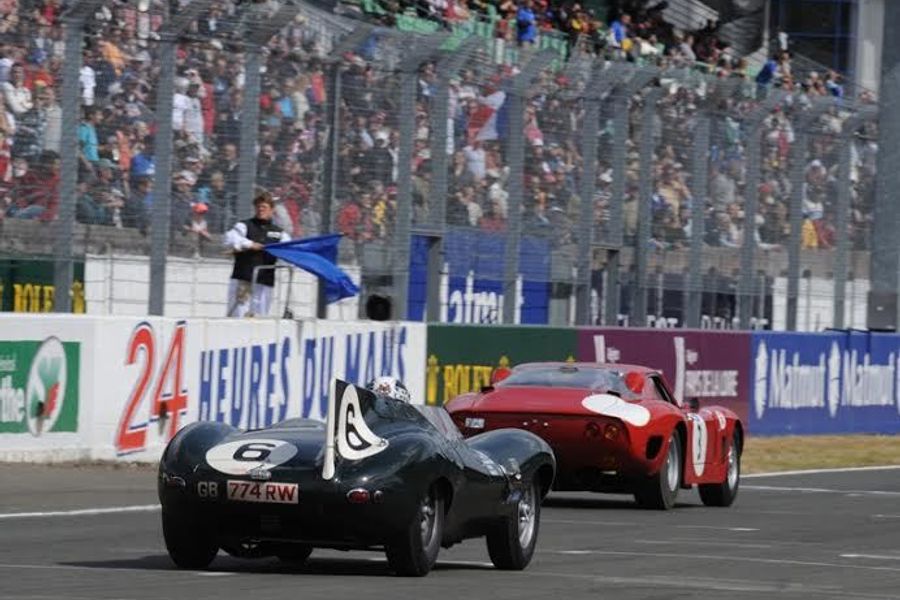 The extended age range for this year’s Le Mans Legend race, supporting the Le Mans 24-Hours itself on Saturday the 13th of  June, has allowed seven Ford GT40s to join the spectacular, packed historic grid that will race on the full Le Mans circuit.

Sixty-one iconic cars, dating from 1949 to 1968 and representing 26 different marques, will take to the track in an outstanding live-action showcase covering two decades of motor racing history. Fourteen of the cars entered actually raced at Le Mans in period, and the remainder of the grid boast their own impressive competition histories.

The red GT40 of US drivers Philippe Mulacek and Alain Vinson took part in the 1967 Le Mans 24 Hours, Marc Doncieux’s GT40 raced there in 1966, and Claude Nahum/Bernard Thuner’s Mk 1 in 1968, with Eric Lidell replacing the car’s regular driver that season David Piper to share with Mike Salmon. Bernard is the son of Jean Jacques Thuner, a four-times competitor in the Le Mans 24 Hours.

The remarkable seven-GT40 entry also includes the ex-Scuderia Bear/Essex Wire Corporation 1965 Mk1 which finished 3rd in the 1966 Sebring 12 Hours (Skip Scott/Peter Revson) and was put out of the 1966 Le Mans 24 Hours when it was struck by a works-entry GT40 during qualifying. Present-day renowned GT3 and historic racer Andrew Smith will share the car with James Cottingham.

Another newcomer that the extended age range admits to the Le Mans Legend grid is the Alpine-Renault A220 of French drivers Sylvain Stepak and Jean Luc Blanchemain. This car was standing 5th overall in the 1968 Len Mans 24 Hours in the hands of Mauro Bianchi and Patrick Depailler before brake failure caused it to crash with Bianchi at the wheel. This was the race at which Alpine and Michelin revolutionized racing with the first use of ‘slick’ tyres.

The A220 and the seven GT40s are joined in what promises to be a stunning class battle by Rainer Becker’s Porsche 910 – again, a new addition to the grid. Originally owned and raced by Bill Bradley, with Vic Elford and Tony Dean, this car enjoyed a number of notable results in period, including 1st in class and 5th overall at Hockenheim in 1968 and 5th overall in the 1969 1000km Nurburgring.

Sam Thomas/Andy Dee-Crowne’s Allard J2X was a 1952 Le Mans 24 Hours competitor, while Paul Griffin/Gillian Carr’s Connaught ALSR raced there in 1955.  Class competition for the Allard comes from another of the same marque – Touring Car driver Patrick Watts will be out in a J2. The Connaught faces sporting competition for class honours from a veteran of the 1956 Le Mans 24 Hours – the beautiful Panhard Monopole X86 of François Cointreau - and from former England rugby captain David Cooke, in the yellow Lotus 11 Le Mans he shares with Neil Twyman.

In 1962 the Healey would have fought against the 1956 Morgan Plus 4 Supersports that Keith Ahlers and Billy Bellinger will drive this year and Till Bechtolscheimer’s Tojeiro EE Buick (the latter having sported a Climax engine in period).

Competition promises to be fierce across all classes, with lively action expected in the GT Cars 1960-65 under 2000 from the Lotus Elan of 12-times Le Mans 24 Hours racer and 1981 British Sports Car Champion John Sheldon. The bright yellow Mini Marcos GT driven by Josh Sadler and veteran racer Barrie Williams should give John a good run for his money and provide huge entertainment for spectators. And competition will also come from Afschin Fatemi’s very rare Porsche 904/8, one of two prototypes fitted by with an eight-cylinder engine by the factory for the 1964 Le Mans 24 Hours, from another veteran of that 1964 race, the Alfa Romeo TZ1 driven this year by Holly Mason-Franchitti.

With other entries including Mercedes 300SL Gullwings, C and D-type Jaguars, Aston Martin DB2 Lightweight Le Mans, Shelby Cobras and Lightweight E-types, the Le Mans Legend is something of a beauty show as well – though very definitely a seriously hard-fought race rather than a parade.

Duncan Wiltshire, Chairman of Le Mans Legend organisers Motor Racing Legends, said: “Extending the entry dates has allowed us to introduce a highly exciting new aspect to the race. I can’t wait to see seven GT40s lining up on the grid! Cars and drivers are travelling from all over the world to take part, and the result should be an astounding 45 minutes of historic motorsport that transports all who are lucky enough to witness or take part in it back through the decades.”