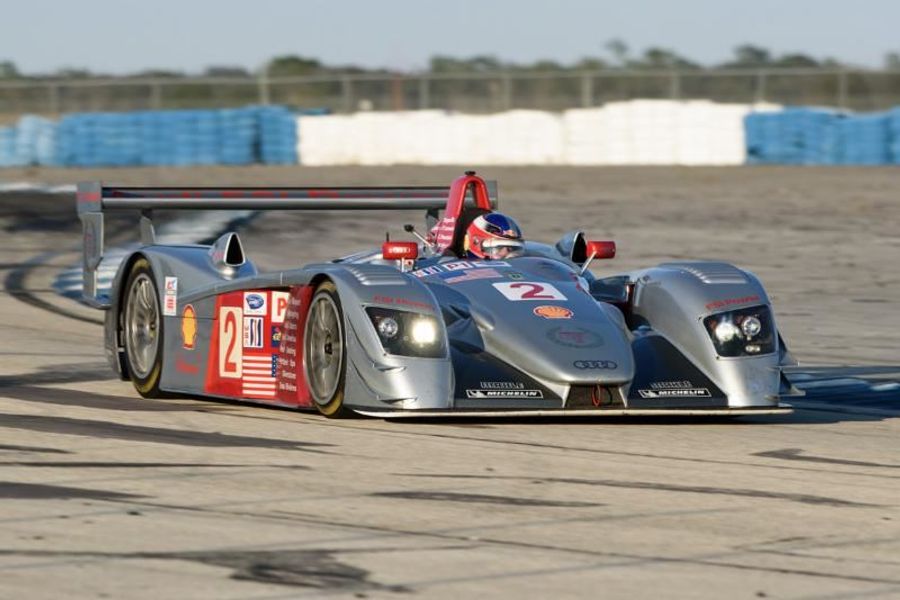 Travis Engen doubled-up on B.R.M. Chronographes Enduro race wins - part of a perfect run of four victories in four races on Friday at Sebring International Raceway - but the greater challenge of this weekend's inaugural Historic Sportscar Racing (HSR) Classic 12 Hour at Sebring is officially already underway on the legendary mid-Florida road course.
In addition to the debut edition of the HSR Classic 12 Hour at Sebring, Pistons and Props, presented by the Alan Jay Automotive Network and Classic Motorsports, this weekend's event also wraps up HSR's season-long 2016 WeatherTech Sprint and B.R.M. Chronographes Enduro series.
Switching between his GMT Racing-prepared 2005 No. 2 Audi R8 LMP and 1962 No. 1 Lotus 23B, Engen solo drove to victories in back-to-back B.R.M. Chronographes Enduros Friday morning. He raced the Audi to the overall and Historic Prototype class win in the Historic and GT Modern B.R.M. race after starting the morning off with a fourth-place overall run and Vintage class victory in the Lotus in the Vintage and Classic GT race that began the day.
Engen's perfect Friday morning also included a pair of first-round WeatherTech Sprint race wins. He topped a 32-car field in the combined Group 2/Group 3 race, taking the overall victory and the Group 3 win in the Lotus. Engen also went first overall in the combined Group 4/Group 6 race in addition to taking the Group 6 class win in the Audi.
Other B.R.M. Enduro winners included Todd Treffert who scored the Classic GT and overall victories in the Vintage and Classic GT Enduro. Treffert finally hit the overall win column in his Speedconcepts 1974 No. 141 Porsche 911 IROC after a pair of second-place finishes in Thursday's Classic RS Cup and Bob Woodman Tires International/ American Challenges races.
Juan Lopez-Santini went two-for-two this weekend with a GT Modern class victory in the B.R.M. Historic and GT Modern race. Friday's impressive run saw him earn a third-place overall finish in his 2008 No. 810 Porsche 997 GT3 Cup prepared by the 901 Shop, sharing the podium with Engen and the second-place overall 2009 No. 11 Oreca FLM09 of Keith Freiser.
Friday's other first-round WeatherTech Sprints Run Group winners included Tom Trabue in his 1965 No. 133 Porsche 911 (Group 2), Malte Muller-Wrede in the 1969 No. 186 Chevron B16 (Group 5), John Harrold in his 1979 No. 94 Chevron B23/36 (Group 7), Ollie Bryant at the wheel of the 2005 No. 101 NASCAR Dodge Charger (Group 8), Robert Blain in a 2004 No. 64 Corvette C6R (Group 9) and Stuart Fain in his 2010 No. 990 Porsche 997 GT3 Cup (Group 10).
While Engen went a perfect four-for-four on Friday, the competition in the first of this weekend's four rounds that make up the Classic 12 Hour was decidedly tougher. Richard Bradley, driving the 2007 No. 18 Pescarolo Judd LMP of David Porter, overcame a penalty for jumping the start to win the first Group E segment. A winning LMP2 co-driver in the 2015 24 Hours of Le Mans, Bradley led Engen's second-place Audi and the third-place 2010 No. 52 Oreca FLM09 "PC" entry of Butch Leitzinger across the line.
This weekend's Group E battle has been highly-touted to be a three-way tussle between Engen's Audi, Porter's Pescarolo and the Rogers Motorsports 2005 No. 38 Audi R8 LMS that was driven to victory in the first two runnings of the Classic 24 Hour at Daytona in 2014 and 2015. Doug Smith and Andy Wallace, the winning pairing at Daytona in 2014, reunited this weekend at Sebring but had an unfortunate start today.
Smith was racing with the leaders in the opening Group E segment only to bring the Audi into the pits with what was ultimately determined to be a terminal gearbox component failure. The No. 38 team has reluctantly been forced to withdraw from the remainder of the Classic 12 Hour weekend.
R8 HSR Audi Sebring Sebring 12-Hours Engen