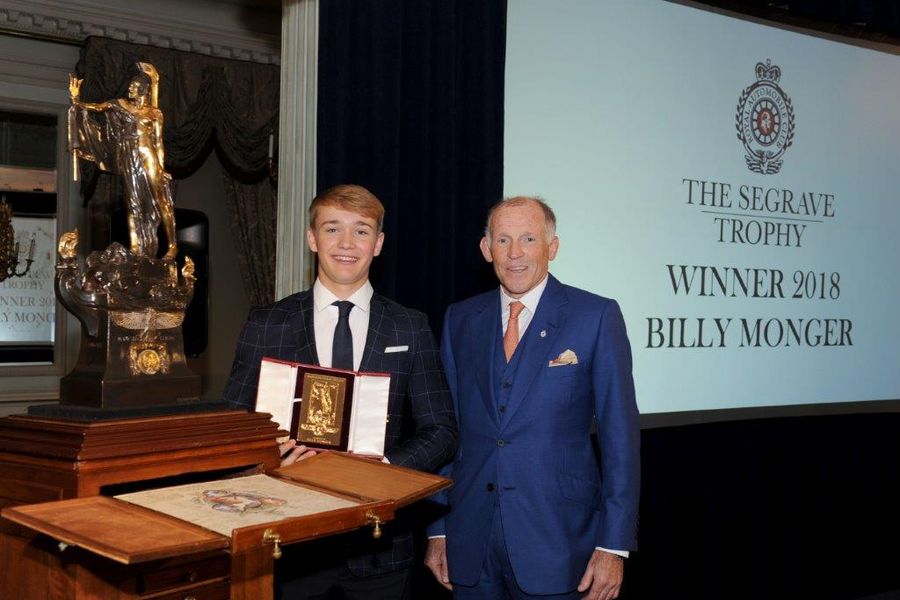 The Royal Automobile Club, today, awarded the prestigious Segrave Trophy to double amputee racing driver Billy Monger. Acknowledging the young man’s remarkable return to racing after an horrific accident, the citation for the award reads; ‘for demonstrating exceptional courage and determination after great adversity and returning to high levels of motorsport.’

Speaking at the presentation lunch, Ben Cussons, Chairman of the Royal Automobile Club, said: “Lady Segrave commissioned the Trophy in 1930, soon after her husband, Sir Henry Segrave died after breaking the water speed record on Lake Windermere. It was her wish that the Trophy would celebrate British nationals who demonstrated outstanding skill, courage and initiative ‒ the spirit of adventure ‒ whether on land, sea or air.”

He continued, “We are delighted to award the Trophy to Billy whose comeback to the sport, which included the overturning of existing FIA regulations, has been extraordinary and demonstrates exceptional bravery and determination. He represents everything that Lady Segrave wanted to honour and that Sir Henry would have admired.”

Upon receiving the Trophy, Monger said: “My life has become so busy with my Formula 1 commentary and my own racing I haven’t had a chance to digest how amazing this award is. But I stayed at Pall Mall last night and it’s starting to sink in just how incredible it is. I’m super proud.”

Twenty-year-old Billy Monger is the youngest ever recipient of the Segrave Trophy. Prior to his professional career in British F4 in 2016, Billy raced karts and successfully competed in the Ginetta Junior Championship. In 2016, Monger joined the F4 British Championship with JHR Developments securing three podiums and finished 12th in the Championship. He was affectionally nicknamed ‘Billy Whizz’.

In April 2017 he was critically injured when he was involved in a high-speed crash at Donington Park. Both of his legs had to be amputated. Fuelled by an outpouring of support from the legions of racing fans and the motorsport industry, Billy embarked on his remarkable journey to race again.

Just three months later in July 2017, Monger was back behind the wheel at Brands Hatch and was invited by Carlin to try out a simulator and almost immediately started posting better times than other drivers in the team.

In March 2018, Monger made his remarkable return to racing with Carlin in the BRDC British F3 Championship, a series that has fostered drivers such as Ayrton Senna, Jean-Eric Vergne and Daniel Ricciardo. The car was adapted to his needs, such as moving the brake pedal and replacing the throttle pedal with a lever mounted on the steering wheel.

Billy’s remarkable return to racing saw him record his first single-seater win at the Pau Grand Prix Euroformula Open race on 19th May this year, driving for Carlin.

The Royal Automobile Club also awarded Trevor Carlin of Carlin Motorsport the Segrave Medal in recognition of the fundamental role that he has played on Billy’s journey back to motorsport.

The Segrave Medal, presented at the Club’s discretion, is only awarded in conjunction with the trophy when the Committee feels it’s justified. It was last awarded in 2014 to Dr Wolfgang Ullrich, Audi’s Head of Motorsport and team drivers Tom Kristensen and Loïc Duval for their contribution to Allan McNish’s dramatic victories at Le Mans 24 Hours and the FIA World Endurance Championship.

Upon receiving the Medal, Carlin said: “I’m delighted to be included on such a staggering list of legends. In a hundred years’ time when people look back and hear Billy’s story, they will say how on earth did he ever manage that - I’m delighted to be a part of that story.”

The Segrave Trophy is named after British pilot and pre-war racing driver, Sir Henry Segrave - a man who pushed himself and his machines to the very limit in the pursuit of ultimate speed. He was the first man to hold both land and water speed records, though the latter would cost him his life in 1930. With such drive and determination in mind, the Trophy is awarded for ‘outstanding skill, courage and initiative on land, water and in air – the Spirit of Adventure’.

The first recipient of the Segrave Trophy was Air Commodore Sir Charles Kingsford Smith, for his transatlantic and England to Australia flights in 1930. Previous holders of the trophy have included Amy Johnson CBE (1932), Sir Malcolm Campbell (1933 and 1939), Bruce McLaren (1969), Sir Jackie Stewart (1973 and 1999), Sir Frank Williams (1992), John Surtees CBE (2012) and John McGuinness (2016). The Trophy is only awarded if the Segrave Nominations Committee judge there to be a suitable recipient that meets the criteria of the award.