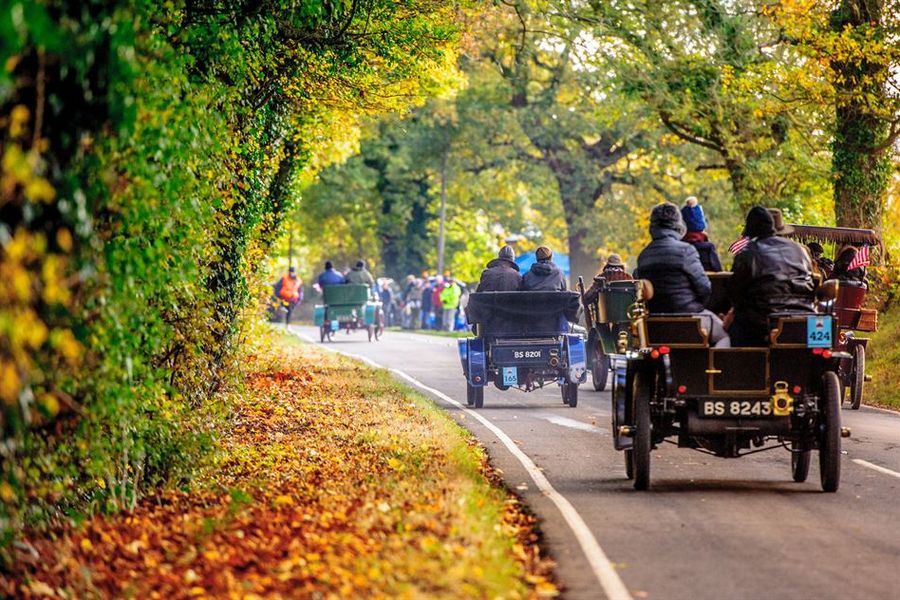 Participants on the Bonhams London to Brighton Veteran Car Run, supported by Hiscox, will be using an alternative route out of the capital this year.
The 400+ pre-1905 veteran cars will leave Hyde Park at sunrise, passing many well known landmarks – Hyde Park Corner, Buckingham Palace, Horseguards and Big Ben before crossing Westminster Bridge.
However, with the centre of Brixton, in South London, undergoing long term road works, participants then will leave London via Kennington, Clapham and Morden, passing through Balham – famously described by Peter Sellers as ‘Bal-Ham, Gateway to the South’ in a 1940’s BBC radio comedy sketch – along the way.
After Morden, the revised route by-passes Sutton on the A217 to Banstead, Tadworth and Reigate before re-joining the traditional route at Redhill. From here it takes the A23 to Horley and the midway halt at Crawley.
A special viewing area in Crawley High Street has been established for the thousands of spectators who regularly turn out to support the hardy crews making their annual pilgrimage from capital to coast.
From Crawley, the route heads to Brighton via Pease Pottage, Staplefield, Cuckfield, Ansty, Burgess Hill, Hassocks and Clayton where it joins the A23 for the run into the finish at Madeira Drive.
Clerk of the Course Neil Carr-Jones said: “We work closely with Transport for London which has advised us that road works and lane closures in Brixton are likely to cause tailbacks and problems for the cars, the youngest of which is 112 years old.
“In March this year we tested a couple of other routes out of London before settling on the A3/A24 through South London and then the A217 towards Reigate. We tried to replicate typical Run conditions and set off shortly after dawn on a Sunday morning using a veteran car to make the trip as realistic as possible.
“Although this alternative route will add about four miles to the overall length of the journey, we feel it will be easier on the cars and, thanks to greater stretches of dual carriageway along the A217, modern traffic and the faster veterans will be able to overtake the slower cars more easily.”
The last time the Run visited Reigate was in 1954, more than 60-years ago. Since then, it has been routed via Streatham, Croydon and Coulsdon on its way to Crawley.
“As well as being easier on the cars, we hope the new route will attract even more spectators along the way with excellent viewing opportunities along Clapham Common and the A24 corridor through South London,” added Carr-Jones.
The 2017 Veteran Car Run will be held, as ever, on the first Sunday in November – this year, it falls on the 5th – and is organised by the Royal Automobile Club.
As dawn breaks, a red flag will be ceremoniously torn and the 400 entries will start their journey from capital to coast: the Run celebrates the passing into law of the Locomotives on the Highway Act in November 1896, also known as the Red Flag Act and refers to a time when these new-fangled machines had to follow a man holding a red flag.
More than 400 veterans have entered this year among which are a large contingent of French manufactured cars. While Germany is generally considered to be the birthplace of the motorcar, it was the French who accelerated the concept of the horseless carriage and was by far the biggest automobile producing nation as the 19th century turned into the 20th century. This year’s Run has adopted a French theme in honour of the country’s contribution to motoring.
The Run is just one element of the Royal Automobile Club’s London Motor Week. A full week crammed with motoring functions and events, which include the free-to-attend Regent Street Motor Show. Held on Saturday 4th November, it turns London’s premier shopping street into a motoring showcase that puts the spotlight on veterans, classics and moderns alike.
Auction house Bonhams will be holding its annual Veteran Car sale on Friday 3rd November while other events in London Motor Week include a motoring art exhibition at the Mall Galleries, which is open to the public, as well as invitation-only lunches, receptions and functions at the Royal Automobile Club's clubhouse in Pall Mall.