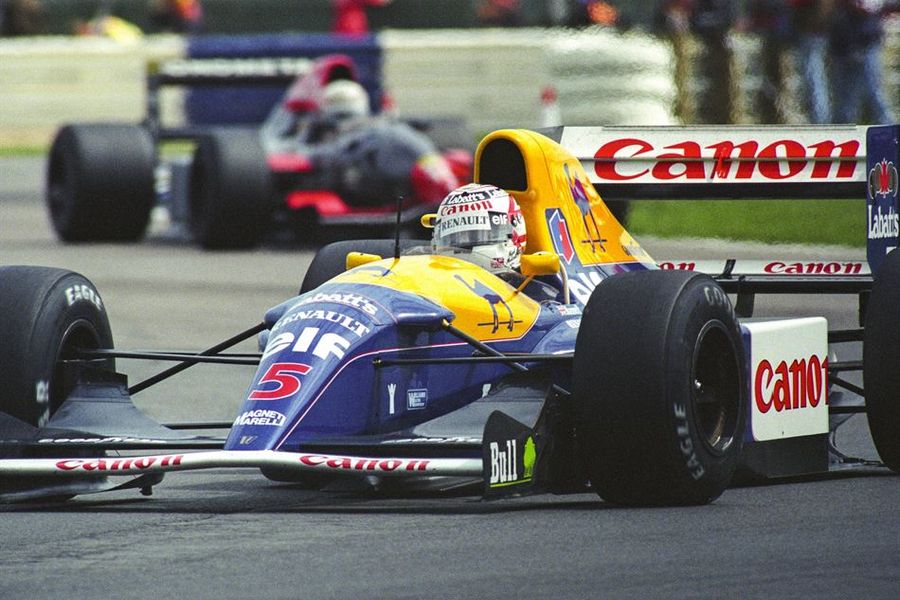 The remarkable motor racing career of  Nigel Mansell CBE will be celebrated with a spectacular showcase at next month’s London Classic Car Show at ExCeL London (15-18 February).
It is now 25 years since the indomitable Englishman finally achieved his holy grail by winning the FIA Formula One World Championship title in 1992, and to mark that milestone a special display of his cars, trophies and other rarely seen memorabilia will take pole position at the capital’s premier event for those with a passion for automotive nostalgia.
Mansell himself will also be present at ExCeL to meet his many lifelong fans, sign autographs and share memories with show-goers during public interviews staged in the event’s busy Supagard Theatre – one of the many highlights to be found at the London Classic Car Show’s sister show Historic Motorsport International, admission to which is included free for all ticket-holders.
“I’m delighted, honoured and, indeed, somewhat humbled that The London Classic Car Show has selected me to be its special ‘Icon' at this year’s event,” said Mansell. “Seeing all those amazing cars which I raced during my career always brings back some incredible memories, and I’m very much looking forward to sharing many of my emotional experiences with those coming to what’s clearly going to be a really great show at ExCeL. I’m really looking forward to it.”
Mansell, now aged 64, first came to prominence when winning the British Formula Ford Championship in 1977 before graduating to Formula Three. He then made his Formula One debut for Lotus in 1980 and over the following 15 years won no fewer than 31 grands prix with Williams and Ferrari – an amazing tally only now topped by reigning champion Lewis Hamilton among British F1 drivers.
The Englishman is also in the record books for being the only driver to win back-to-back Formula One World Championship and CART IndyCar World Series crowns, a feat he achieved when clinching America’s premier open-wheel title in 1993.
Although Mansell’s outstanding race record marks him out as one of motor sport’s greatest-ever drivers, it was his astonishing ability to overcome adversity that won him special respect and affection with fans right around the globe.
It was this incredible fighting spirit which caught the public’s imagination, earning him the nickname ‘Il Leone’ (The Lion) from Ferrari’s famous fans, the tifosi. His courage was equally adored by British followers, with ‘Mansell Mania’ erupting at Silverstone as ‘Our Nige’ overcame the odds to score emotional victories in front of record crowds.
Now memories of that magical era will be coming to London with the biggest and most comprehensive display ever dedicated to one of Britain’s best-loved sporting heroes. In previous years, the award-winning London Classic Car Show has put the spotlight on F1’s greatest car designer Adrian Newey, the sensational McLaren F1 supercar and 70 years of Ferrari history. As this year’s chosen ‘Icon’, the Mansell showcase will be every bit eye-catching and breathtaking as previous star-studded attractions.
“The heroics of Nigel Mansell are legendary and we will be recreating many of those magical memories at this year’s London Classic Car Show,” enthused Bas Bungish, Event Director. “More thrillingly, Nigel will be with us to share his recollections with all those coming to ExCeL – that’s something no motor sport fan will want to miss.”
The very special Mansell tribute is just one of many standout crowd pullers at the ever-expanding London Classic Car Show. A further showcase, this time curated by TV star Philip Glenister, is dedicated to notorious Getaway Cars as used by criminals in the movies while the central Grand Avenue will once again provide visitors with a unique opportunity to see and hear many of their favourite classic cars in glorious action as they parade on the automotive catwalk.
Whether discerning classic car owners, collectors, experts or enthusiasts – or diehard Nigel Mansell fans – those not wanting to miss the 2018 London Classic Car Show can take advantage of significant discounts on offer when booking in advance. If purchased now, adult admission costs just £25 (£30 on the door) and a range of upgraded Premium and Family Tickets are also available online.