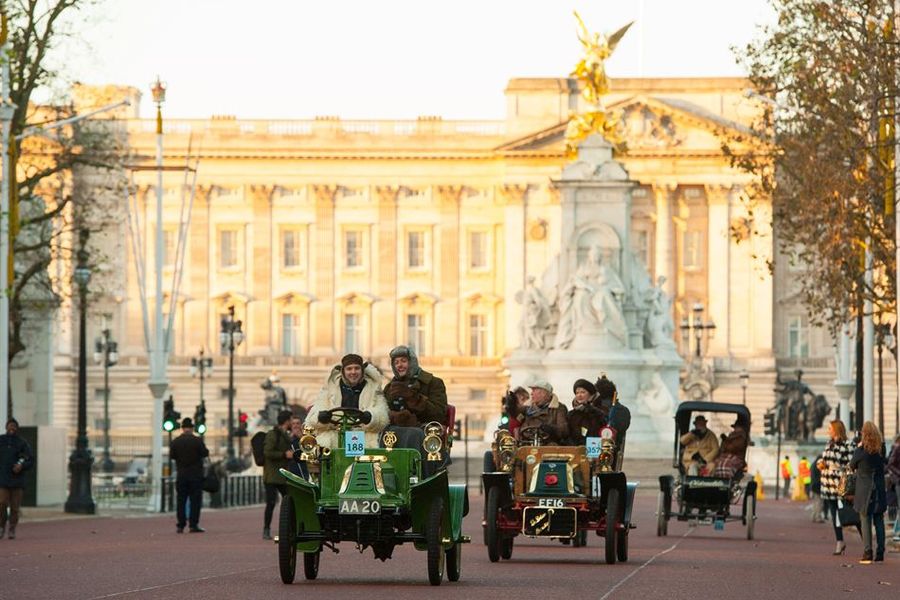 The clocks went back one hour last Sunday… but this coming Sunday (5th November) they will be going back more than 112 years as hundreds of veteran cars set off from London on their annual pilgrimage to Brighton.
A bumper entry of more than 450 horseless carriages will leave Hyde Park as dawn breaks, ready to tackle the epic 60-mile drive from capital to coast.
The London to Brighton Veteran Car Run, which dates back to 1927, was founded to commemorate the Emancipation Run of 1896, which celebrated the new-found freedom of motorists granted by the ‘repeal of the Red Flag Act.’ The Act raised the speed limit to 14mph and abolished the need for a man carrying a red flag to walk ahead of the cars whenever they were being driven.
Acknowledged as the longest running motoring event in the world, this year has a French theme in honour of the country’s contribution to motoring’s early days – in 1903, for example, France built 30,000 cars – more than half of the world’s total production in that year. Fittingly, almost half of this year’s entry are of French-built cars, and include an 1893 Peugeot Type 14 – the oldest vehicle on the Run and the first car to have been driven on Italian roads.
Renault, like Peugeot, a name familiar to today’s motorists, was another of motoring’s pioneers. The company, a long-time supporter of the Run, has entered a recently restored Type C from 1900, while other French marques represented include De Dion Bouton, Mors, Bolide and even a patriotically-named Napoleon.
Even though few of the cars have any form of protection against the elements, the Run will take place come rain or shine… and there’ll even be a few stars on view, too.
Among the celebrities taking part this year are adventurer Charley Boorman, who will be driving a 1904 Rover 8 hp from the British Motor Museum to promote men’s health during the month of Movember. As in previous years, BBC presenters Chris Evans and Alex Jones will be following the Run in a fleet of classic buses all carrying successful bidders who raised money for the BBC Children in Need charity.
Due to on-going road works in Brixton, this year’s Run will take a slightly different route out of London. After leaving Hyde Park, the veterans will drive down the Mall past Buckingham Palace, before heading down Horse Guards Parade on the way to the Houses of Parliament and Big Ben. It will then cross the Thames at Westminster Bridge before heading towards Stockwell, Clapham Common, Balham and Morden rather than Brixton and Croydon.
Upon leaving London, the Run will take in Banstead, Tolworth and Reigate before re-joining the traditional route at Redhill. From here it heads to a spectator-friendly halfway halt at Crawley High Street.
Crawley High Street also marks an important stage on the Run as it’s the start of the Chopard Regularity Time Trial, the only competitive element of the event. Finishing 13 miles away in Burgess Hill, the Regularity Time Trail requires drivers to get as close to a chosen average speed as possible with a Chopard Mille Miglia Chronograph, worth £4,950, awaiting the Trial winner.
After Burgess Hill, the Run tackles yet more scenic but demanding Sussex roads, passing through Hassocks and Clayton where it joins the A23 for the run into Brighton and the finish at Madeira Drive.
Aside from the start – the first car will be flagged away from Hyde Park at 7.03am precisely – timings are approximate, but the first cars are expected at the Crawley halt from 8.15am with the last leaving by 2.00pm. The first car is due at the Madeira Drive finish at shortly after 10 am while to be sure of a finishers’ medal, participants need to make it to the finish before 4.30pm.
Aside from Hyde Park, Crawley and Madeira Drive, the organisers have suggested the following locations as good viewing points:
7.03 am - 8.15 am: Constitution Hill, London
7.03 am - 8.15 am: The Mall, London
7.03 am - 8.15 am: Horse Guards Parade, London
7.10 am - 8.20 am: Westminster Bridge, London
7.10 am - 9.15 am: Clapham Common, London
8.20 am - 2.05 pm: Handcross - The Red Lion, High Street, B2110
8.25 am - 2.10 pm: Staplefield, B2114 - The Jolly Tanners, RH17 6EF and The Victory Inn, RH17 6EU
8.45 am - 2.30 pm: Cuckfield High Street, B2036
10.00 am - 4.25 pm: Brighton - St Peters Church, York Place, BN1 4GU
“Seeing these lovingly maintained cars is more than a spectacle. It’s a piece of living history, a reminder of the fearless motoring pioneers who, literally, paved the way for all of us,” said Peter Read, Chairman of the Royal Automobile Club’s Motoring Committee.