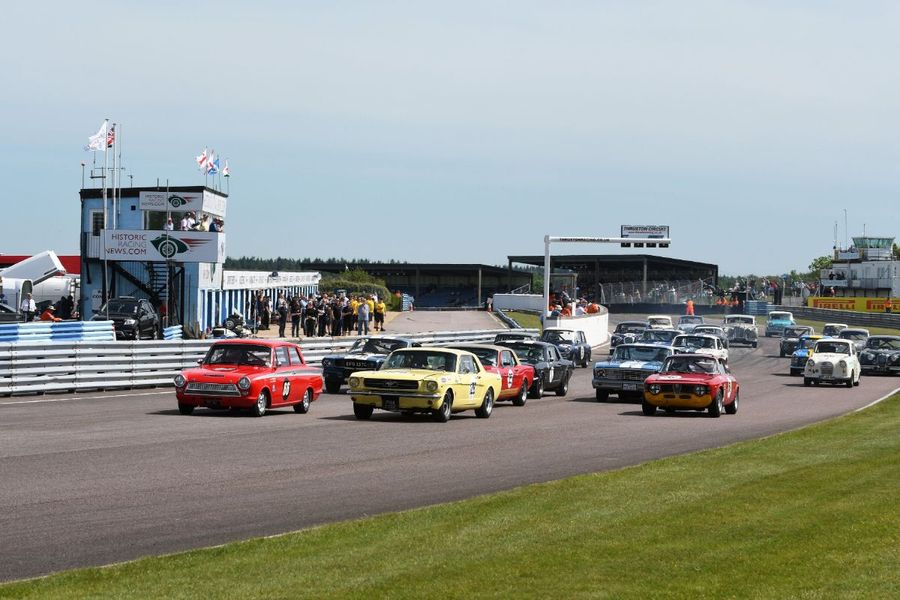 The inaugural Thruxton Motorsport Celebration – powered by Motorsport Magazine – was a resounding success as thousands of fans enjoyed two days of historic racing, high-speed demonstrations and spectacular flypasts at the famous Hampshire venue. Thruxton Circuit played host to a stunning display of classic cars as the UK’s fastest racetrack built on the success of last year’s hugely-popular 50th anniversary meeting, and supporters weren’t disappointed as the 15-race schedule served up a weekend of wheel-to-wheel racing.

Fans also had the opportunity to get up close and personal with legendary machines in a family-friendly paddock on the iconic airfield and were treated to a number of thrilling demonstrations – both on-track and in the air. Thruxton was bathed in sunshine for much of the weekend, while a brief summer shower on Sunday did little to dampen the spirits of the motorsport enthusiasts looking to enjoy a bevy of retro races.

Motor Racing Legends’ colourful Historic Touring Car Challenge with Tony Dron Trophy grid was a firm favourite while their U2TC for pre-66 under two-litre Touring Cars also provided plenty of spills and sideways moments. Meanwhile, their RAC Woodcote Trophy/Stirling Moss Trophy pitched the Ecurie Ecosse Jaguar XK120 and the Frazer Nash Le Mans Replica against each other for the first time since the 1952 British Empire Trophy race on the Isle of Man, triggering memories of a by-gone era.

Elsewhere, the Sports 2000 Championship field provided the fastest cars on show this weekend with a pair of white-knuckle races culminating in Paul Streat lifting the Ian Taylor Trophy for topping the Pinto class in his Lola T87/90.

The FJHRA/HSCC ‘Silverline’ Formula Junior Championship put on four hotly-contested events – two for front-engined and two for rear-engined cars – before the Historic Racing Drivers Club completed the package with three evocative rounds – the ‘Coys 100 Trophy’ for Touring Cars 1958-66 (including an appearance from musician Chris Rea in a Morris Minor), the ‘Alfa Challenge’ for Alfa Romeo Sports, GT and Touring Cars and the ‘Allstars’ for pre-66 Sports, GT and Touring Cars.

There were also runs from the iconic Lola T70 Mk38 and the V8 Lola T332 as well as a Chevrolet-powered Cooper Monaco T61, a Formula Atlantic Chevron B49 and the Reynard 89D which had been piloted by ex-Jordan F1 driver Marco Apicella during the 1989 Formula 3000 season.

For aviation fanatics, the state-of-the-art Thruxton Centre was an ideal vantage point to see the spectacular flypasts put on by the Battle of Britain Memorial Flight – with a pair of legendary Spitfires catching the eye on Saturday and a majestic Dakota C-47 sweeping over the circuit on Sunday.

Thruxton Circuit Director Bill Coombs said: “It’s been a fabulous weekend and we’re delighted with the meeting as a whole. I think it’s lovely to see all these demonstrations, and it’s brilliant to have such a variety of classic supercars and the superbikes here as well.

“For me, this meeting is the highlight of the year. The Bennetts British Superbike and Kwik Fit British Touring Car Championship events are stand-out dates in our calendar, but with so many classic cars on show from different decades this event holds such personal interest! The cars are just wonderful to watch, and they generally have more power than grip so they slide around a lot and are great fun. It’s been a wonderful meeting, with a real family atmosphere, and we hope it’s been a brilliant weekend out for everybody.

“And we’ve got a lot of big meetings to come with British Truck Racing, the second visit of the BTCC and the BSB. We’ve still got plenty of action at Thruxton for fans to enjoy!”