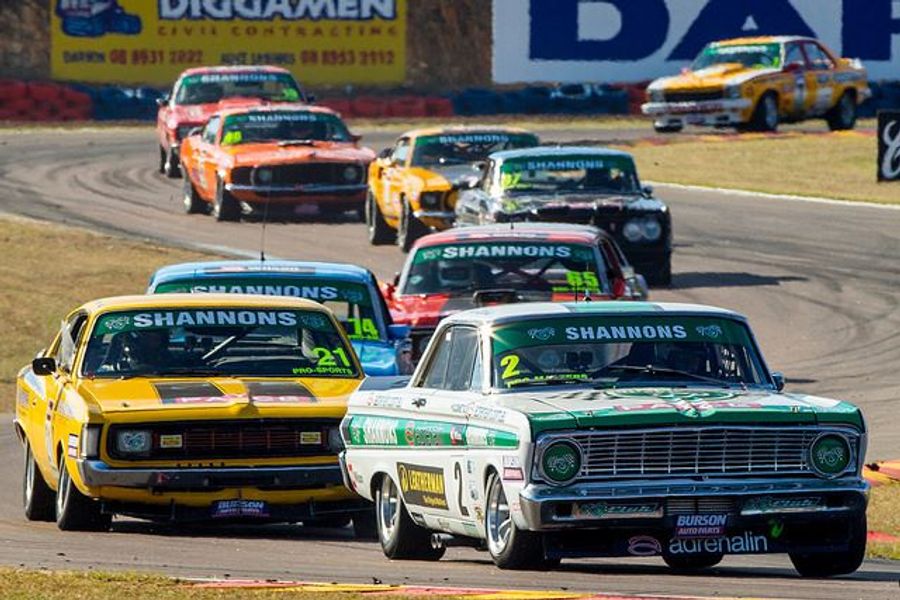 The two-time Paynter Dixon Touring Car Masters champion and motor sport hall of famer Jim Richards will return to the series this weekend at Hidden Valley Raceway, when TCM supports the CrownBet Darwin Triple Crown for the eleventh straight year. Appropriately, Richards will race his Shannons-sponsored Ford Falcon Sprint in the annual ‘Shannons Thunder in the Valley’ showpiece this weekend.

Only ever intending a part-time campaign this year, Richards has sat on the sidelines so far in 2018 however will be a welcome addition to an already strong grid assembling for the trip to the top this weekend.

Richards’ return with his iconic Falcon Sprint ensures that several of the series most popular cars will be back on the grid this weekend. Former V8 Ute racer Ben Dunn returns with the Chevrolet Monza, while Allen ‘Cusso’ Boughen is also back with his remarkable Mercury Comet.

Richards will join long-time rival John Bowe and defending champion Steve Johnson on the grid this weekend as the latter pair battle for the series lead, in a replay of their 2017 title stoush. Johnson closed the margin to series leader Bowe with a commanding victory at Winton Raceway last time out; just five points now separating the WM Waste Ford Mustang and the Wilson Security / PAYCE Holden Torana at the top of the table.

Johnson returns to Hidden Valley with a staggering record at the challenging circuit just outside of Darwin’s CBD. He won two of the three races, and the round, during his part-time campaign in 2015 and then repeated that effort driving a Ford Falcon XY GTHO a year later. Last year he won the second of three races and edged Bowe for the round victory to make it three on the trot.

Johnson’s Darwin hat-trick came after Bowe won the three rounds prior to that, between 2012-2014. The five-time TCM champion has also scored pole position in eight of Touring Car Masters’ previous ten visits to Hidden Valley.

While the household names dominate the headlines, an equally compelling title battle is unfolding for the positions behind the Bowe-Johnson stoush at the pointy-end.

While Tilley and Hansford sit third and fourth in the championship thanks to their remarkable consistency, Bressington and Gomersall have been in race-winning form of late: Bressington taking a thrilling fourth race at Winton last time out and Gomersall breaking through for his maiden TCM race win in Tasmania in April. Hansford, meanwhile, has finished in the top three in five of the last six races and, with Tilley, must feel overdue for a maiden TCM victory.

Ben Dunn returns to the series this weekend following a positive TCM debut at the Adelaide 500 earlier this year, back aboard the Chevrolet Monza coupe’ that was a winner in the hands of former Supercars racer, Greg Ritter.

Meanwhile, ‘Cusso’ Boughen will bring joy to Darwin fans with the return of his Mercury Comet. The popular Queenslander was forced to the sidelines following an engine failure in Adelaide however Darwin fans in particular will be keen to see him back.

Following a spin late in a race last year, the former Drag racer executed a series of perfect donuts in front of the packed Darwin crowd: sending them crazy and becoming an internet sensation in the process. Queenslander Brett Curran is another returnee this weekend in his Ford Mustang Fastback, while Ian Woodward will aim to build on the promising debut of his new Camaro SS at Winton.

The Shannons Thunder in the Valley Paynter Dixon Touring Car Masters grid will tackle four races for the first time in Darwin this weekend. The popular jumbled-grid Trophy R