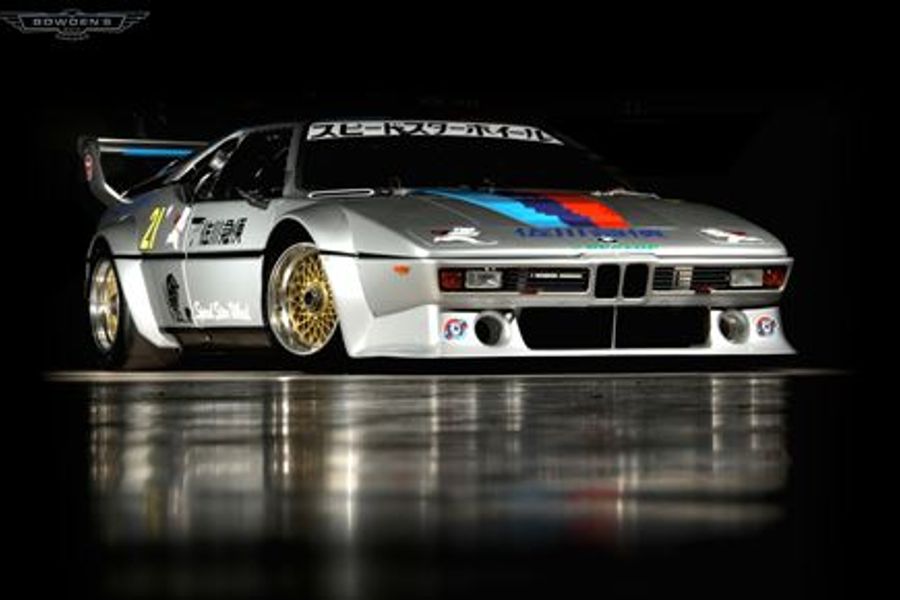 One of the world’s most desirable racing BMWs is heading to Phillip Island to help celebrate BMW’s 100th birthday at the 27th annual Classic Festival of Motorsport from March 11th to the the 13th. The Bowden Family’s newly-acquired 1979 BMW M1 Procar will join another 12 BMWs competing during the three day meeting – a record nine of them ex-JPS Team BMW Touring Cars. There will also be  further nine or so JPS road cars (another record) amongst more than 30 BMWs from early 2002 models to the latest M5s in a special Anniversary display by the BMW Club of Victoria.
The standout amongst the BMW drivers racing will be seven times Bathurst winner Jim Richards, who won the first two of his four Australian Touring Car titles in 1985 and 1987 at the wheel of BMW M cars. Richards will face the starting lights five times over the weekend in the capacity grid Group C & A races driving an ex-Team JPS BMW 635 coupe now owned by New Zealand enthusiast Peter Sturgeon. The car has been painstakingly restored to the same Group C spec that Richards raced it originally in 1983 and 1984.
The track appearance of the former ‘Speed Star Wheels’ BMW M1 Procar in Chris Bowden’s hands is believed to be the first time one of BMW’s most famous Post War racing models has been on a Victorian circuit. The sleek six-cylinder silver coupe’s rivals in the packed Group Q & R events for ‘big banger’ sports cars will include five McLaren sports cars – including two thundering big block Chev-engined Can-Am M8F models, each producing around 900HP – seven Lola sports cars and a V8-engined Elfin 360 Repco-Brabham.
The BMW M1 Procar one-make Championship of 1979 was the idea of BMW motorsport legend Jochen Neerpasch. The identical race-prepared M1s supported rounds of the FIA World Championship and pitted many of the world’s great drivers from F1, Sports and Touring cars against each other. The 1979 BMW Procar championship was won by Niki Lauda, while in 1980 Brazilian Nelson Piquet took the prize, with Australia’s Allan Jones second.
BMW pulled the pin on the series for 1981, but by December 1980 the M1 was eligible to race for Group 4, which meant the cars were able to compete in the World Endurance Championship. Chassis #1077 that Chris Bowden will race at Phillip Island was built in 1979 by F1 legend-to-be Ron Dennis, whose race workshop Project 4 later merged with F1 team McLaren.
The M1 spent most of the next five years racing in Japan, where in late 1981 it was converted to ‘Silhouette Group 5 spec, with wider, more aerodynamic and lighter bodywork. This made it a lot more competitive against the Porsches, Nissans, Mazda's and others it raced against in the era.
In 1984 #1077 was retired and acquired by the team’s sponsor. It was still occasionally used in selected historic events, but mostly hibernated for the next 25 years. In 2014, Chris Bowden heard about the famous M1 racer while in Japan and with his father David undertook six or seven months of negotiation until they were finally able to finalise its purchase.
After arriving in Australia, the M1 was restored painstakingly to its factory race guise, where it is now eligible for many FIA Historic events in Australia and worldwide. The car’s still-original 3498cc M88/1 fuel injected six-cylinder engine was rebuilt in Japan, with a recent dyno check confirming 480HP – as much as the M1 Procars did in their day. At 42 inches high, the M1’s wing is the car’s tallest part, otherwise it is the same height as a legendary Ford GT40.
Following its Phillip Island Classic appearance, Chris Bowden plans to take part in selected BMW 100th Anniversary events with the car in the USA.
The 27th Phillip Island Classic Festival of Motorsport is being staged by the Victorian Historic Racing Register with continued support from Penrite, Shannons and CoolDrive and Repco.
JPS Team BMW Touring Cars 1979 BMW M1 Procar 27th annual Classic Festival of Motorsport

Can-Am Classics Thrill on the Hill