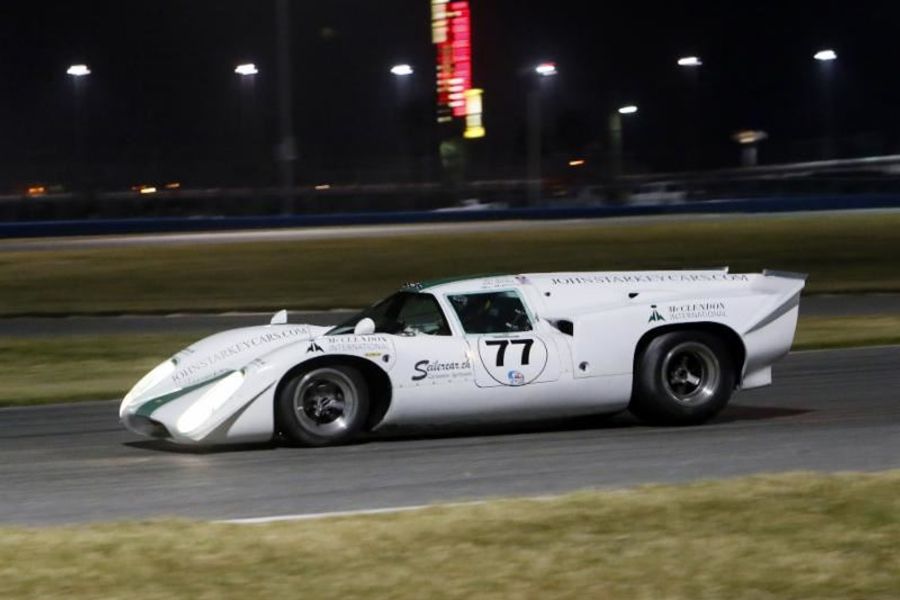 A pair of featured night races at the Historic Sportscar Racing (HSR) Daytona Historics produced five race-winning drivers and close competition under the lights Saturday at Daytona International Speedway.
Juan Gonzalez scored the overall and Historic Prototype victory in the first race of the nighttime doubleheader with a convincing solo-drive in his 2009 No. 52 Oreca FLM09. The Historic Prototypes raced with the GT Modern class that saw Juan Lopez-Santini score his second race win of the day in his 2008 No. 810 Porsche 997 GT3 Cup prepared by the 901 Shop.
The Vintage and Classic night race was won overall by Toni Seiler in the 1969 No. 77 Lola T70 while Stuart Milne and Pablo Peon co-drove to the Vintage victory in their 1972 No. 12 Datsun 510 from the 901 Shop.
Gonzalez led the similar 2009 No. 11 Oreca FLM09 of Keith Frieser across the finish line while the 1996 No. 4 Riley & Scott Mk III of Richard Carlino and Nigel Greensall completed the Historic Prototype podium in third place. The 20-year-old Riley & Scott is prepared by GMT Racing. In addition to finishing third overall behind Gonzalez and Frieser, Lopez-Santini shared the GT Modern podium with runner-up Paul Reisman in his 2009 No. 74 Porsche 997 GT3 Cup prepared by Hudson Historics.
Aristole Balogh took the final GT Modern podium spot in his 2009 No. 46 Porsche Cayman S prepared by Pulse Racing Services. Balogh topped all other Caymans in the race as well as several more powerful Porsche 997 GT3 Cup cars and a late-model Ford Mustang Boss 302.
Seiler and the Milne and Peon duo were split on the overall Vintage and Classic podium by second-place finishers Chris Beighton and Alec Hammond who co-drove the 1966 No. 45 Ford Mustang 2+2 prepared by Type 1 High Performance. Beighton and Hammond also garnered second-place Classic-class honours while Fred Schulte completed the Classic top three in his 1973 No. 31 Porsche 911 IROC from Heritage Motorsports.
Milne and Peon shared the Vintage top-three with a pair of first-time podium finishers while runner-up Dean DeSantis raced to the first podium finish of his career in his 1976 No. 94 BMW 2002.
The British husband-and-wife team of Helen Elstrop and Colin Elstrop in turn stepped on to the Daytona International Speedway podium for the first time in their debut weekend of competition at the World Center of Racing. The Elstrops co-drove a 1967 No. 5 Alfa Romeo GT Jr. on loan from DeSantis to a third-place showing.
Saturday also featured the first round of WeatherTech sprints in which Lopez-Santini and Seiler scored their first victories of the day in Group 10 and Group 7, respectively.
Sean Brown raced his 1975 No. 85 Ford Escort from B-G Racing to the overall win in the Group 2 and Group 3 race, John Reisman won Group 6 in the 2010 No. 33 Corvette Daytona Prototype from Hudson Historics and Curt Vogt took Group 5 in his 1970 No. 23 Ford Mustang Boss 302 from Cobra Automotive. Doug Richmond raced his Falcon-bodied 2008 No. 63 Riggins-chassied GT1 car to the Group 9 win while Bryan Collyer won the Group 8 stock-car class in his 2001 No. 90 Chevrolet Monte Carlo.
Sunday's schedule at the HSR Daytona Historics concludes the weekend with final WeatherTech Sprints, two B.R.M. one-hour enduros and featured races for the HSR Global GT and Classic RS Cup racing series.
Porsche Daytona HSR