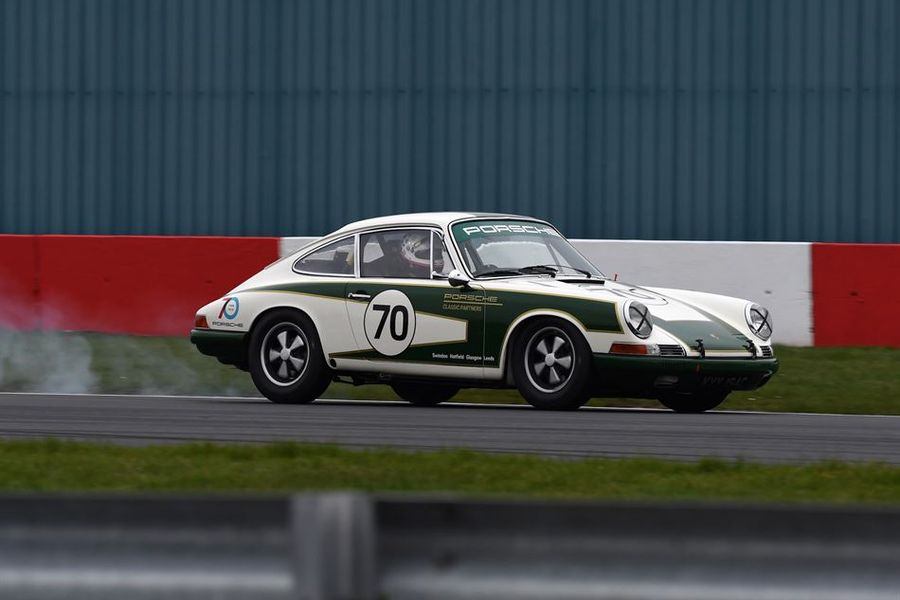 All photos courtesy of Jeff Bloxham.

A head-turner in the paddock at last week’s HSCC race meeting at Donington Park was the immaculate Porsche 911 raced by Richard Attwood and Anthony Reid and run on behalf of Porsche GB, the car's race number marking the 70-years of Porsche Sportscars.

The car was a hive of activity after qualifying as the crew worked to rectify an engine issue caused by a missed gear, but we were able to steal a few minutes with Anthony Reid, a driver with a history of success in Porsches, and after the meeting we spoke to John Bradshaw of Road and Race Restorations Ltd who restored the car for racing.

“We are helping Porsche celebrate 70-years of sportscars with this lovely 911,” explained Anthony. “It has all happened very quickly, I had a phone call from Porsche GB asking if I was interested having had some success in Porsches including a Le Mans podium.

“I had a lot of Porsche success in Japan, and I am the last person to win a race in a Porsche 962, I think it was 1996 when there was a quirk in the Japanese GT regulations that allowed us to run a 962 with modifications at a GT1 car and we won at Fuji.

“I have done Porsche Supercup and Carrera Cup GB in the guest car, and when I stopped and look back I was quite surprised how much I had done in Porsches. It was great to be invited to help them celebrate the 70-years.

“It has to be a good sign that they have measured me up for a race-suit so I hope to be doing more races. The car is baeutifully prepared, the livery was designed by students from Brookes University, it looks great and really period – and I believe at some of the races we are going to have a period transporter!

“The car handles well now, has good brakes and the engine was very sweet until we broke the rocker – I’m really looking forward to racing the it."

At Donington the 911 came home first in class B and 12th overall in the one-hour Guards Trophy race once the engine issue was sorted, and back at Donington a week later we caught up with John Bradshaw to ask him about the project.

“With it being 70-years of Porsche Sportscars this year Porsche GB decided they would like to celebrate the anniversary by racing a car they have had squirreled away for a few years. It is a 1965 911, and we have rebuilt it and got it race-ready to compete this year.

“The plan is to race the car in the UK and in some European events with Peter Auto, so we should be next out at Spa with them in May. Then we will do some Guards Trophy races with the HSCC, hopefully the Silverstone Classic, and a couple of other events to get the car noticed and remind everyone that Porsche Classic are manufacturing the parts for these older cars and we have four Porsche Classic centres in the UK.

“We have technicians from each of those centres looking after the car at the different meetings, a core team from who we will use four at any times so we are sharing the expertise – and the work!

“We have rebuilt everything conform to the Appendix K regulations, the car, engine, even the suspension. It was a great car to work on, the 924 GTP we rebuilt was a real stretch in comparison! We have the car set-up the best we can, it has to weigh 1,0002kg, and when we built we were 60kg underweight, which meant we could put the weight where we wanted within the regs.

“The car is a good one, we have shaken it down with my Richard Attwood and my son Tom a couple of weeks ago and it went well. Anthony Reid and Richard were drove it in the HSCC season-opener and it went well, we had a missed gear and th engine over-revved and broke a couple of rocker arms, but testament to the quality of the engine hat was all that went, we changed them and got a class win in the race.

“The plan from Porsche GB is to put drivers who have driven Porsches with success in the car, and we are hoping to have Tiff Needell in, Derek Bell said he would be interested, and at Spa we have a young and old combination of Josh Webster and Anthony. Josh is a great lad, we just have to get him out of his flappy-paddle routine and hope he is used to stirring a good old-fashioned gear stick!

“It has been a great project for Road and Race to be involved in. We are 30-years old this year, my son is in the business and it is great to be involved with Porsche and see the cars we have put together for them being so appreciated.“