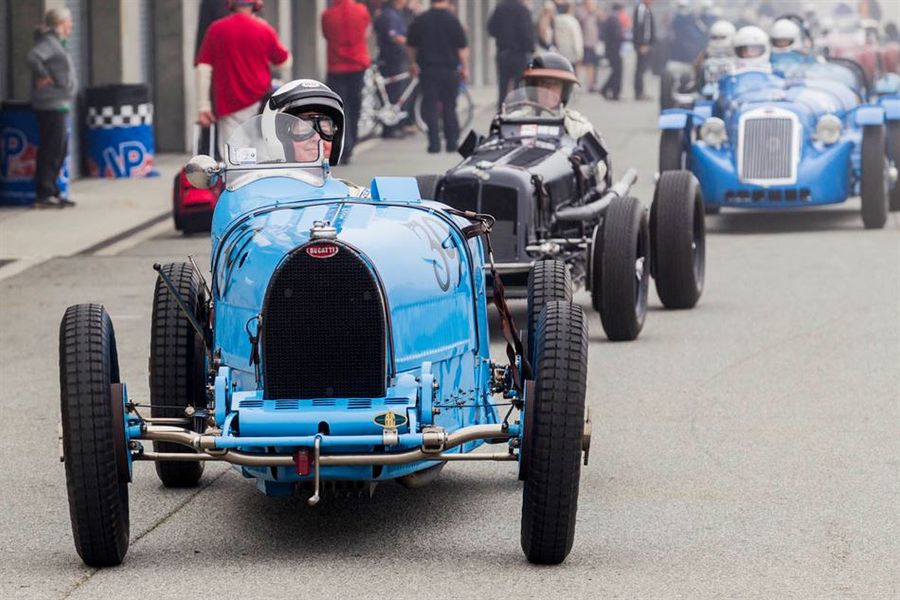 In four weeks tens of thousands of the world’s automobile community will sharpen their focus on all the activities that comprise Monterey Classic Car Week that runs from August 11th-20th. Since assuming control of historic racing at Mazda Raceway Laguna Seca in late 2009, the Sports Car Racing Association of the Monterey Peninsula (SCRAMP) is poised to usher in its eighth edition of the Rolex Monterey Motorsports Reunion in spectacular fashion and kick-off the entire week on Friday evening, Aug. 11th with its race car show on Alvarado Street.
SCRAMP re-launched the famed Monterey Historic Automobile Races that originated in 1974 with just 66 entries into what is widely considered to be the premier historic racing event in North America and one of the top three worldwide that attracts more than 900 entry requests for the 550 grid positions.
“When SCRAMP took the helm of the historic races in late 2009, our collective vision was to keep propelling it onto the international stage,” explained Gill Campbell, CEO and general manager of Mazda Raceway Laguna Seca. “Through the tireless efforts of our volunteer board, hundreds of volunteers, dedicated staff and the amazing caretakers of these historic cars who race them, the Rolex Monterey Motorsports Reunion is the destination of choice for visitors from around the world to come and experience motor racing’s bygone eras.”
Under SCRAMP’s direction, the event is hitting on all cylinders. In the 2015 California State University, Monterey Bay economic impact study, SCRAMP’s Rolex Monterey Motorsports Reunion accounted for $18.5 million of direct visitor spending.
There is a steady increase in attendance, from 50,172 in 2010 to last year’s record 70,525. A concentrated effort to engage with automobile manufacturers to showcase their newest models alongside historic cars has been successful and now regularly features such companies as Porsche, Ford, Acura, Audi, McLaren, Jaguar, and of course Mazda. Each year, companies return not only bringing executives, but clients and hosting international journalists who provide extensive coverage of the Monterey area.
Recognizing SCRAMP’s efforts, the historic gathering has been honored with multiple award nominations. The Rolex Monterey Motorsports Reunion has been runner-up three consecutive years for the International Historic Motoring Awards that are presented in London, and last year was nominated for the prestigious FIA Members Heritage Cup that was awarded in Vienna, Austria.
“Being nominated is quite an honor, and we have been second to such events as the longstanding Silverstone Classic (England) and Monaco Grand Prix. So we are in privileged company,” Campbell added.
For the second consecutive year, SCRAMP is partnering with The Enthusiast Network for editorial coverage in such magazines as Automobile and Motor Trend, live streaming of the races and a one-hour television special that will air on the CBS Sports Network.
This year’s edition of the Rolex Monterey Motorsports Reunion is slightly different in that it forgoes honoring a single marque and instead honors the 60th anniversary of the track itself, which SCRAMP built in 1957. Complementing the anniversary are the 60th anniversary of Formula Junior, which is attracting an international racing contingent, and 70th anniversary of Ferrari.

Gallery: Historic Winton One Week Earlier this May