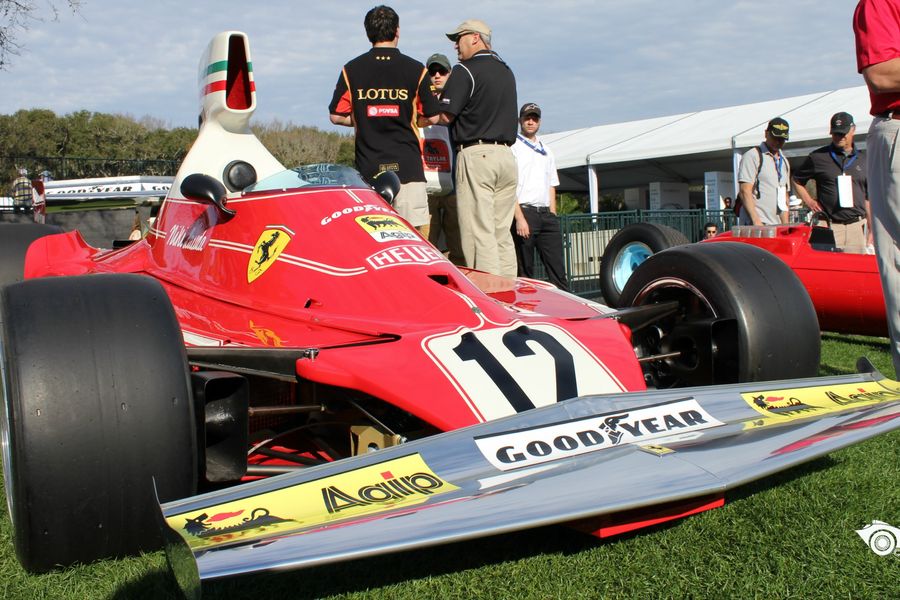 If you are a frequent reader of HistoricRacingNews.com and have been following my recent series of posts previewing the plethora of collector car auctions that help fill up Monterey Car Week (Monterey Car Week!) you will have undoubtedly noticed that I am more than a little excited about the prospect of the late Niki Lauda’s 1975 Championship winning Ferrari 312T crossing the auction block at the Gooding & Company event at Pebble Beach Equestrian Center. Were I a lottery winner my journo hat would be replaced by a bidders cap and I would be on the front row for this one.

The Pebble Beach Auction, as it is called, is always a special if for no other reason than Gooding & Company, is the official auction partner of the famed Concours d’Elegance. This year, besides the usual treasure trove of outstanding and special cars, the public will have the rare opportunity to acquire a very significant piece of racing history. (See Video Below)

The car, chassis 022, is the one Lauda used to win the French Grand Prix in ’75 on his way to his first of three world titles. It is a classic from the iconic “high-box era” of Formula One.   Will this car be a record setter? Predictions are it could reach the 10-million dollar mark.

That is not the only racing machine that will be turning heads. There are sports cars a plenty. Many of the auction houses have star cars from the prototype hay-day of IMSA, the GTP cars, as the sanctioning body celebrates its 50th Anniversary.  Gooding’s offering is the 1989 Jaguar XJR-10, Chassis 389. This car raced from 1989 to 1991 in Castrol and Bud Light liveries. At auction the car sports the famed Castrol livery. In period this successful Jaguar was driven by the likes of Jan Lammers, John Nielsen, Davy Jones, Price Cobb, Martin Brundle and Raul Boesel. Those drivers combined for four victories and nine finishes on the podium in IMSA GTP competition.  Experts predict this car could sell for upwards of two million dollars. 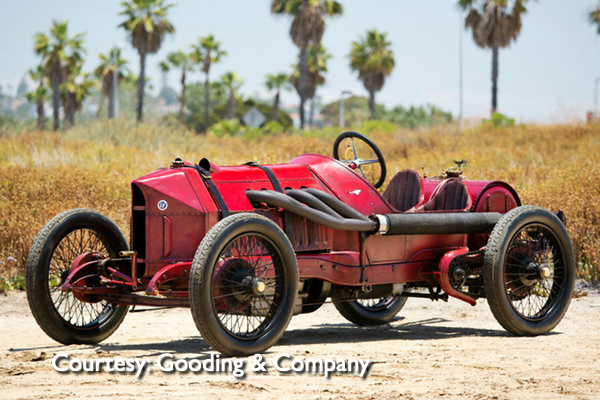 Isotta Fraschini was best known for the luxury cars the Milan based manufacturer produced in the 1920s. However Fraschini was also a pioneer of performance cars as well. His Tipo I Corsa won the 1907 Coppa Florio and the 1908 Targa Florio. Fraschini saw the American market as key so he brought his early machines to the USA finishing 2nd to the winning “Old 16” Locomobile in the Vanderbilt Cup. Undeterred, the Italian remained state side and won the Lowell Cup, Savannah Trophy and the Briacliff Trophy in ’08. That success was not enough for the ambitions of Franschini so he tasked talented designer Giustino Cattaneo with making a car to compete at Indianapolis 500 Mile Race. In 1913 six cars, the Isotta Fraschini Tipo IM, were hastily built during labor unrest in Italy. Ultimately build issues proved to be the undoing of all three of the cars entered. This car, chassis 0451, lasted the longest before American driver “Terrible” Teddy Tetzlaff broke a drive chain on lap 118.  The history of this car and the excellent state of the machine could mean bidding will go as high as four million dollars. 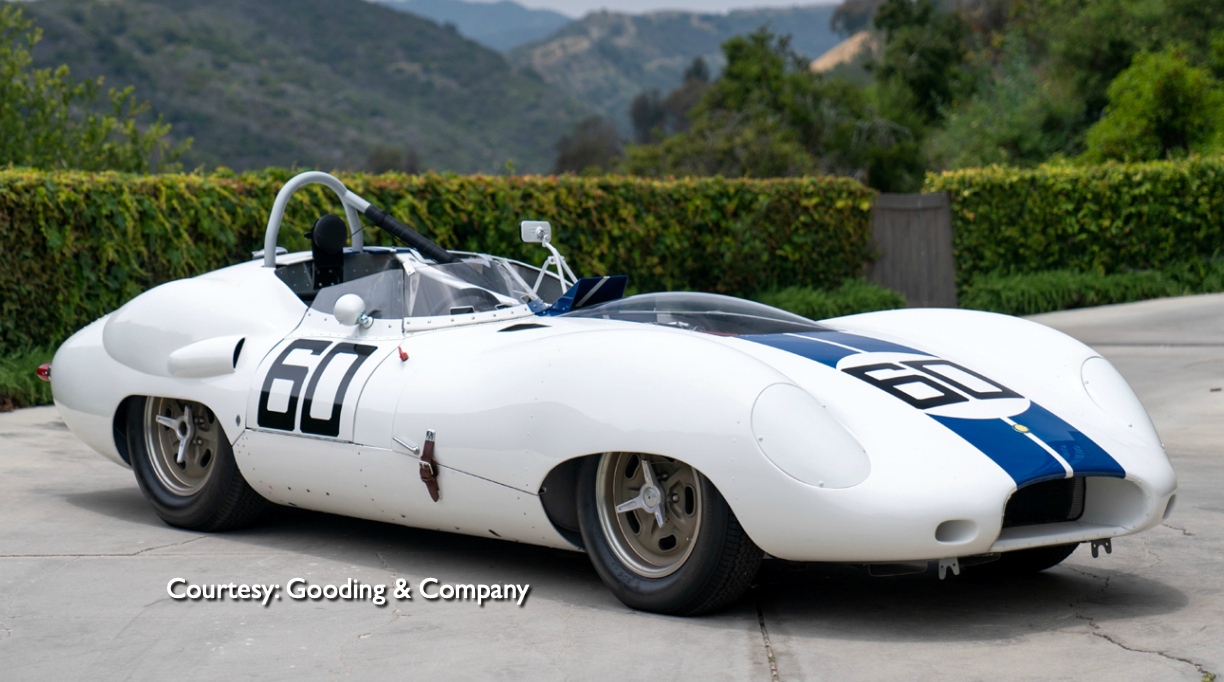 A more modern stunner is the Briggs Cunningham owned 1959 Lister-Jaguar Sports Racer. This is the first of the Lister-Jags to be penned by de Havilland engineer Frank Costin. It is not just the natural progression of design, but Costin’s restyling of the famed “Knobbly” designs. In ’59 the car carried Walt Hansgen four wins and the SCCA’s C-Modified National Championship. At Sebring in ’59 Cunningham put Le Mans winner Ivor Bueb and legendary Stirling Moss behind the wheel. Those two had the car as high as third before the car ran out of gas and Moss was disqualified for not walking back to the pits, but hitching a ride. While Cunningham was the original owner the car was also owned and raced by Bob Grossman and Phil Forno to great success. Many consider this car to be the most historically significant of the Costin designed Lister Knobblys and could realize as much as 1.5 million dollars. 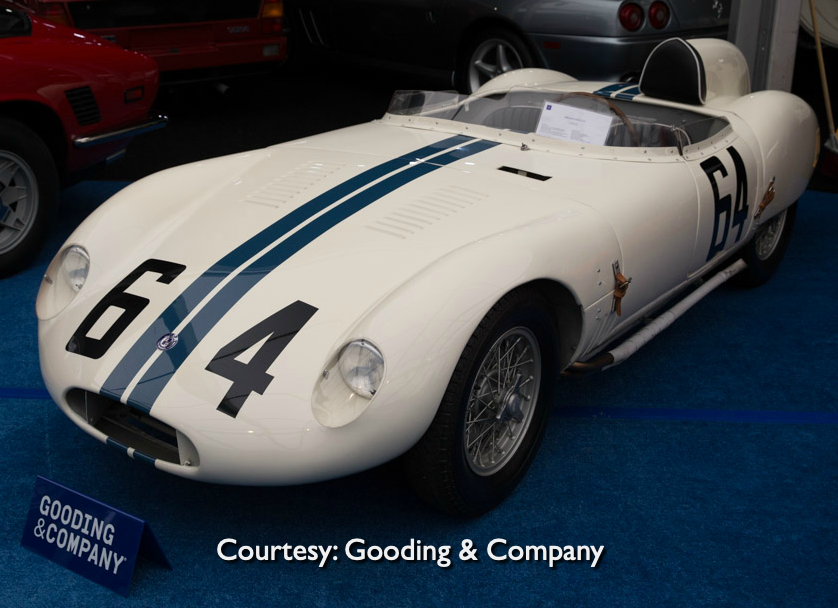 Finally, another car with Briggs Cunningham heritage is the 1959 OSCA Tipo S-273. Entered by Cunningham and driven in the 1960 12-Hours of Sebring by the pioneering road racer Denise McCluggage this car is dripping with provenance and will certainly get a lot of bidding interest. The Maserati brothers, Ernesto, Ettore, and Bindo started building OSCAs in 1947. Cunningham used one to win the 1954 Sebring 12-hour and was a champion of the brother’s creations there after. McCluggage and teammate Marianne Windridge drove the Cunningham owned car under the tutelage of Lloyd “Lucky” Caner and his famed Camoradi Racing Team. In 1961 forestry businessman and amateur racer A. Cecil Schoeneman purchased the car. From his race shops in Sioux Falls, South Dakota he raced the car in SCCA regional races until 1963. This car is eligible for some of today’s most interesting historic competition events.

With over 140 lots crossing the block there are also some extremely special road cars demanding big money.  In fact 40 of those are expected to bring more than a million dollars each. As is often the case, Italian cars could lead the money figures. Thirty Ferraris will go under the hammer and nearly half, 13 of them, should cross the million-dollar mark. The choice of this group could be the 1958 Ferrari 250 GT LWB California Spider that is expected to bring upwards of 13 million dollars. Hot on the heels of that car could be the ’58 Ferrari 250 GT Series I Cabriolet.  This is one of 40 Cabriolets produced by Carrozzeria Pinin Farina between 1957 and ’59. The car is expected to reach eight million dollars. 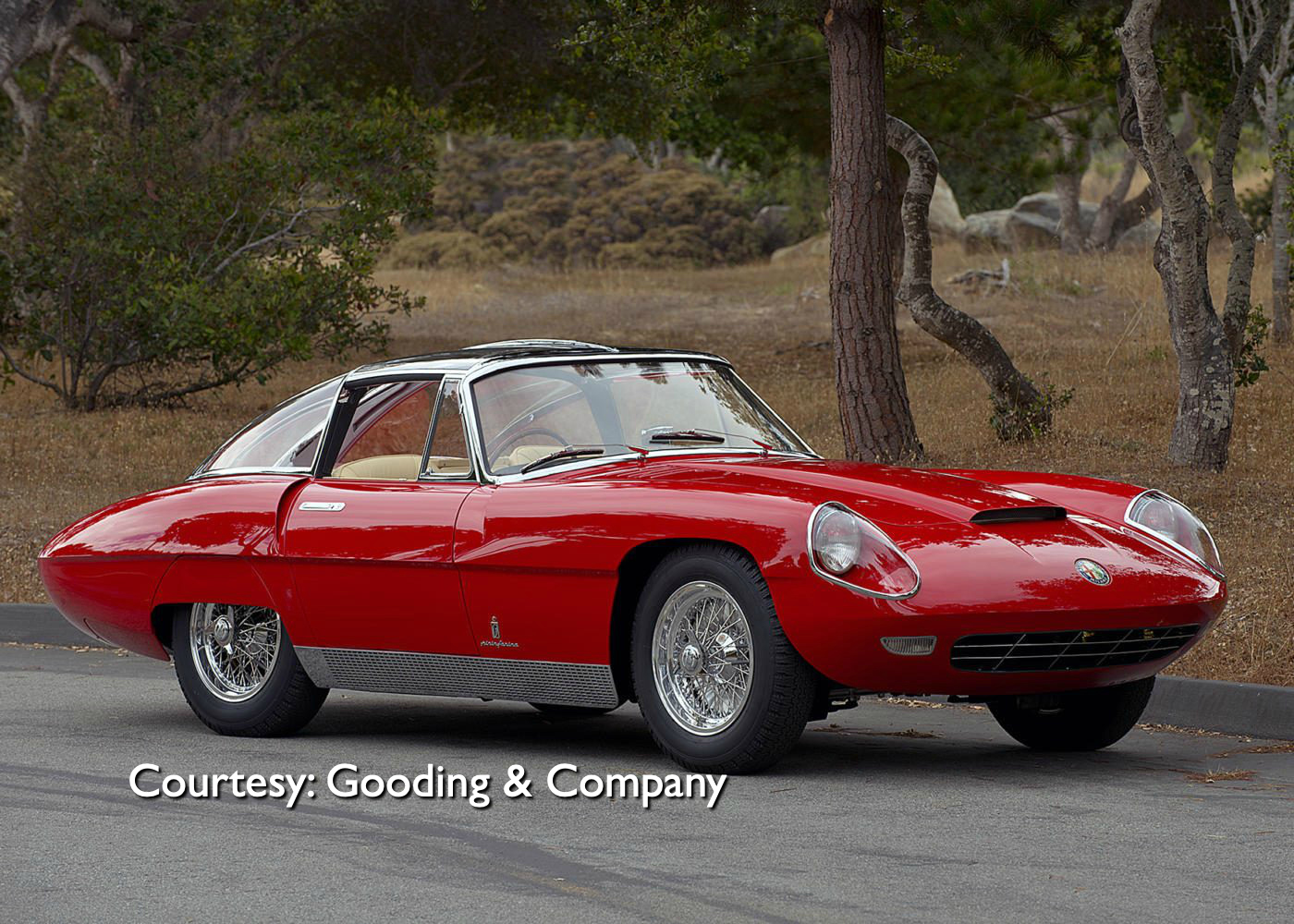 Six Alfa Romeos will cross the block with half of them expected to bring more than 1.5 million dollars.  The star of this group is the 1953 Alfa Romeo 6C 3000 CM Superflow IV. After the Second World War Alfa Romeo wanted to revive its once dominant racing program. Engineer Giuseppe Busso was tabbed to lead that effort to design a car based on the 6C 3000 engines that could compete with the likes of Ferrari and Lancia. The result was the 6C 3000 CM, the CM suffix standing for “Competizione Maggiorata (Competition Enlarged Displacement). This Alfa, chassis 00128 was originally built as a Berlinetta by Colli and was believed to be part of the 1953 Alfa Romeo Le Mans team. When Alfa pulled out of racing at the end of ’53 to focus on production cars the car was shipped to Pinin Farina where the car was used as a rolling test bed for new ideas that the coachbuilder called “Superflow”. The car debuted at the 1956 Torino Motor Show.  Unsatisfied, Pinin Farina kept tweaking the car through the end of the ‘50s. In 1960 the car appeared for the first time in its final form, the SuperFlow IV at the Geneva Motor Show. After touring the United States, the car was featured in a Sports Illustrated cover story by Karl Ludvigsen titled, “The Last of the Red-Hot Alfas”. The car, which has had six previous owners, is being offered at public auction for the first time ever and could surpass eight million dollars.

Fans of German cars have a lot to look forward to as well. There are seven Mercedes-Benz on offer and five of those should bring more than one million dollars each. Beside Mercedes, as many as 16 Porsches will go under the hammer and the top seller could well be the 1988 Porsche 959 Sport originally imported by the former publisher of the LA Times Otis Chandler in 1989. Only 337 of Helmut Bott’s “Super Porsche” were built and only 37 of those were sport models. Chandler worked with the late Al Holbert, then head of Porsche Motorsport North America, for four years to clear bureaucratic red-tape and this car, the last built for the US market (chassis 030) was imported. This 959 was the fist one imported legally under a special museum exemption that meant the car could never be driven, raced, titled or licensed. In 2000 passage of the DOT’s "show and display" exemption meant that could change. The 959 was sent to famed Porsche collector and preparer Bruce Canepa who worked with the Northern California Diagnostic Lab and state officials to make the car emissions compliant. It was a three-year effort that was documented by “Autoweek” magazine.  The car will be sold with less than five thousand miles on the odometer and could bring close to three million dollars.

The usual suspects at the Equestrian Center, Bentley, Rolls Royce and 11 Aston Martins will represent Blighty. The attention getter in the latter group will be the 1961 Aston Martin DB4 GT. A scant 75 were originally built and only 30 of those were left hand drive. The GT, developed by AMR manager John Wyer, was shorter, lighter and more powerful than the production models.  The history of this car is documented in the 2016 book “The Aston Martin DB4GT”. In the autumn of 1961 John Sconfienza, an engineer from Montana purchased the car on his way home from delivering a Ferrari he had sold in California. Sconfienza decided to stop by the Bonneville Salt Flats to look in on the annual Speed Trials. Convinced to make a run his new car, Sconfienza set a new class speed record with a two-way run averaging over 134 miles per hour. Ironically, even thought the GT was first designed for racing, the notoriety the Montanan gained for his speed exploits also garnered him a terse note from Aston Martin’s service department informing him his warranty was null-and-void.