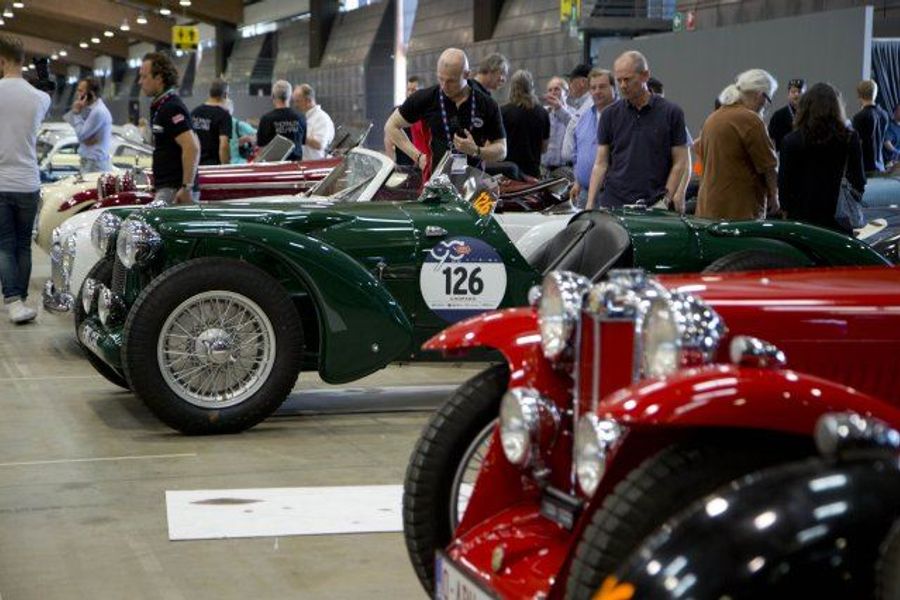 Tomorrow morning the Italian flag will wave to start off car number one in the 2017  Mille Miglia, which sees 450-cars take on a four day competitive journey from Brescia to Rome and back. As tradition demands, car number one will be an O.M. 665 Superba, paying homage to the brand from Brescia that won the first Coppa delle Mille Miglia, in 1927 - ninety years ago.
The event had 705-entries from 43 countries with a panel of inetrnational experts and scrutineers having to choose the cars that actually made it to Brescia this week.
The most represented marque is Alfa Romeo with 46 cars (chosen from 72 entries), followed by Lancia with 38 (54) and FIAT with 34 (out of 61 entries). Following on, there are Mercedes-Benz with 32 (49), Jaguar with 24 (47), Bugatti with 23 (all entries) and Porsche with 21 (35). The Aston Martins lined up at the start will be 17 (34) and the Ferraris 16 (out of 17 entries), 13 O.M.s (of ever all O.M.s have been accepted), 12 BMWs, 11 Cisitalia and 10 Maseratis. The starting line-up is completed by other brands, for a total of 85 manufacturers.
Cars have to have had at least one model entered in the Mille Miglia between 1927 to 1957, have been accepted, with organisers issuing alit of candidate cars. In order to be selected, the entered cars had to have at least one of the documents vouching for its authenticity: Fiche ACI-CSAI (Italian Motor Sport Commission), the FIA HTP (Historic technical passport issued by the Fédération Internationale de l'Automobile) or FIVA ID (Identity Card of Fédération Internationale des Véhicules Anciens).
After scrutineering, as always carried out at the Fiera di Brescia and, subsequently in Piazza della Vittoria, the Mille Miglia 2017 will start from Viale Venezia, at 14h30 on Thursday 18 May. Following tradition, the route starts and ends in Brescia, passing through half of Italy before and after the halfway mark in Rome. From Brescia, after the classic drive past Lake Garda and passing Verona, the cars will head for Vicenza, finishing the first leg in Padova.
The following day, Friday 19th May, the second leg will take competitors to Rome. Cars will leave Padova from 06h30 and will pass through Ferrara, Ravenna, San Marino, Urbino, Gubbio, Perugia and Terni. Arrival in Rome is planned at around 21h30, with a parade in the Via Veneto and the customary tour of the eternal city at night.
Saturday 20th, will see the start at 07h00, the route leaving the capital will remain unchanged until Tuscany. The most traditional route of the race includes Ronciglione, Viterbo, Radicofani and Siena, where the spectacular parade in Piazza del Campo is a highlight. From here, in answer to repeated requests, Mille Miglia 2017 will veer north passing Montecatini Terme and Pistoia, crossing the Appennines at the Abetone Pass, to then travel along the Po valley from Reggio Emilia to Modena.
The third leg will end in Parma, which always offers a warm welcome to the participants. From here, on the morning of Sunday 21st May, the start will be at 07h30. From the Po Valley, the long Freccia Rossa convoy will drive through Cremona and Mantova. There will be a break for lunch in Rovato, where participants will be able to taste local delicacies such as the characteristic manzo all’olio (beef with oil). The final leg will see the teams reach the finishing line in Brescia.
 
From 14h30 onwards, Viale Venezia in Brescia will see the checkered flag coming down on the Freccia Rossa.
For 2017 there is a substantial increase in the number timed trials, which increase to 112, plus other challenges. The final classification, after the application of coefficients (unchanged following the changes done last year) will comprise 130 timed stages. Among these, for the first time, Mille Miglia will hold a few “showcase trials” in the squares of Verona, Castelfranco Veneto, Ferrara, Pistoia, Busseto, and Canneto sull’Oglio. The last timed trials of Mille Miglia 2017, decisive for the ranking, will take place in an extraordinary setting: the runways at Ghedi Military Airport.
“Mille Miglia is priceless for the Automobile Club Brescia,” explained Piergiorgio Vittorini, President of the Automobile Club Brescia. “We can only be the custodians of this treasure, because the Red Arrow lives in the hearts of so many enthusiasts all over the world. For this reason, we have plans to strengthen the image of the Red Arrow and all those aspects linked to tourism and hospitality, thanks to the involvement of all the towns and cities along the route, with the help of all the provincial offices of ACI Italia.”
President of 1000 Miglia Srl, Aldo Bonomi, added: “In June 2012 we decided to establish 1000 Miglia Srl, a company wholly owned by the Automobile Club of Brescia, which this year will manage the big motoring event for the fifth consecutive year. The recent appointment of the company's Board of Directors for the next three years will allow us to start a new cycle that combines many traditions - sporting, historical, cultural and human – of the Red Arrow with a modern business management outlook on an international scale. This is a formidable base on which to base a future of continued success for our Mille Miglia, the world-famous race from Brescia.”