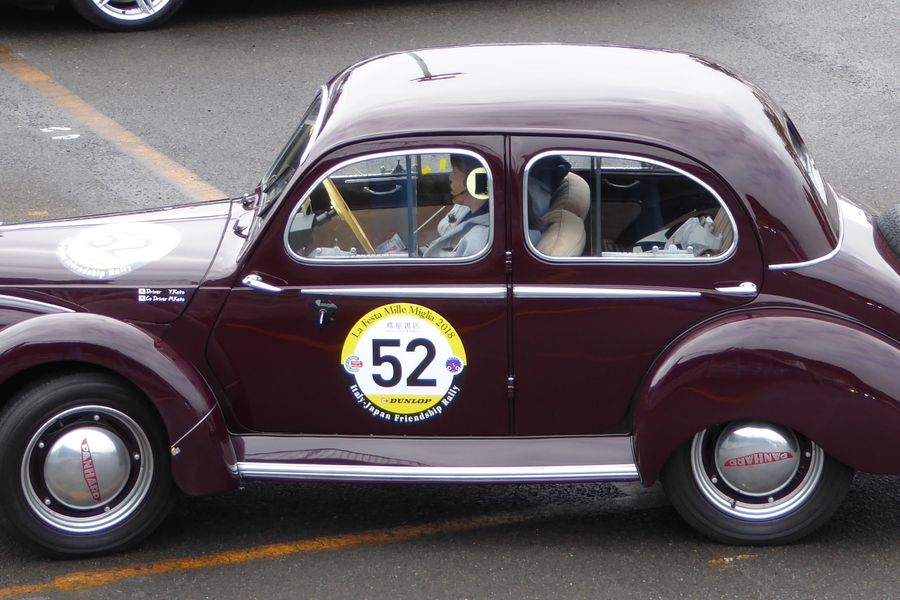 La Festa Mille Miglia 2018, held in Japan, is now in its 21st year. As you can probably guess from the title, it’s a 1000-mile rally run along the lines of the current Italian 1000 Miglia and this year it started on 19th October in Tokyo, ending up in the same city on Monday 22nd October.

A representative from FIVA (the Fédération Internationale des Véhicules Anciens or international federation of historic vehicles) attended as the FIVA Steward, and for the first time La Festa Mille Miglia was chosen as one of this year’s 10 events at which a FIVA Best Preserved Vehicle award would be presented.

And the winner of the FIVA Best Preserved Vehicle trophy?

Whilst the FIVA Steward found it unusually hard to separate the many potential contenders, the trophy was finally awarded to the 1951 Panhard Dyna X 110/X85 owned by Yoshinobu and Miyoko Kato. This model of the marque is affectionately known to aficionados as ‘Louis XVth’ thanks to its marvellous baroque curves.

While the Panhard Dyna might perhaps not be every enthusiast’s first choice for competing in a 1000-mile road rally, the diminutive Dyna X would certainly be a car that almost every participant would love to take home with them, judging by the reaction of other competitors.

Meanwhile the winner of La Festa Mille Miglia itself was the Bugatti Type 40 of Kyoto and Junko Takemoto, with a Triumph TR2 and MG C-Type as runners-up in the 1000-mile rally.

La Festa Mille Miglia was the tenth and final event this year at which FIVA presented a Best Preserved Vehicle award, having announced early in 2018 that eight of the ten events would be new to the awards. As FIVA President Patrick Rollet explained at the time, “We are keen to help promote not just the very ‘top-end’ occasions, but also to recognise the passionate individuals who take part in events that are more open to the majority of enthusiasts – hoping to encourage a wider spectrum of FIVA members to enjoy these valuable celebrations of historic vehicles.”