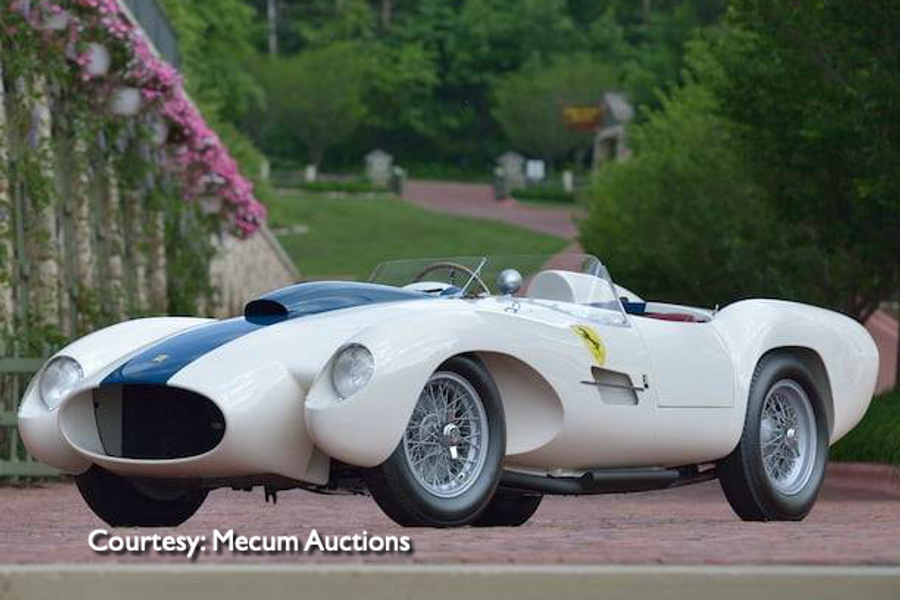 The auctions that traditionally fill up the Monterey Car Week calendar are renowned for the high-end cars that cross the blocks. Mecum auctions are more known for being the house of the 'everyman car'. Not at Monterey. Annually one of the biggest allotments on the peninsula – (362 of 697 cars offered sold in 2018) – Mecum like the rest pulls out all the stops in California.

One year ago sales topped 45 million dollars a year ago and they should surpass that in 2019. The star of the Mecum show this year could well be a Ferrari from Dana Mecum’s own collection. A rare 1954/59 0432M in white and blue NART livery has created a lot of pre-event buzz (see above). The car was delivered to the original owner Luigi Piotti as a 250 Monza PF Spyder. In June of ’54 the car won its inaugural race, the 12 Hours of Hyere, driven by legendary Maurice Trintignant. The car raced the rest of the ’54 and ’55 garnering another win along with a second and a third place finish in six outings.

The 1956 and ’57 seasons were spent at the factory, as the car was re-commissioned to Carrozzeria Scagliette for the Pontoon-fender coachwork the car carries to this day. In 1959 now dubbed a 0432M the car was sold to American importer and racer Luigi Chinetti founder of the extremely successful North American Racing Team. (NART). The car claimed first prize at the 1960 New York Auto Show. From there the car moved through a who’s who of Ferrari Collectors including Ferrari Club founder Ken Hutchison.The bill of sale for that exchange listed the car as a 1959 O432M.

The Ferrari is just one of eight cars from Dana and Patti Mecum collection that are available in Monterey. The quality of these cars is unsurpassed and could fetch over 6 million dollars total.

Two other million-dollar cars on offer are forever linked to the great Carroll Shelby. The first is the 1952 Allard J2 Roadster that launched the racing career of Shelby. The cars first owner Louisianan Charles Brown hired Shelby to race the Allard in the 1952 Pottsboro Hillclimb which the Texan won with ease.

Shelby was so impressed with the Allard, it is said to have inspired the creation of his all conquering Shelby Cobras, and that bring us to the second of the cars on offer. In 1965 the Cobra CSX2588, became the last Cobra sold to the public and is the next to last one ever built. This beautiful car is one of only 56 cars finished in Rouge Iris. The Shelby family still owns the final Cobra produced and has no plans to ever sell the car.

Four very significant Indy 500 racecars from the Mitch Kruse Indy Car Collection will cross the block. These cars are all from the early IRL era. The highlight of these is the 1997 G-Force GF01 driven by Arie Luyendyk to victory from pole position. The car, with Luyendyk driving also claimed wins at the 1997 Texas 500 and the ’98 Las Vegas 500. Sam Schmidt drove the car to victory in Las Vegas the following year.

Also on the block will be the 1997 G-Force GF01 that Scott Goodyear piloted to one of his second place finishes in the 500.  Two 1995 Lolas will also be on offer, both were driven to pole position at the Greatest Spectacle in Racing by Scott Brayton. The first is the 1995 pole winning T95-00 USAC Serial # 6032. The second T95-00 is the fastest qualifier in the history of the 500-mile race.  Brayton used the car, USAC Serial # 6002 to record a 4-lap average of 233.718 MPH. That record still stands today. These four cars together could realize upwards of three million dollars in sales.

Those are not the only racecars that will make headlines at the Mecum Auction. The 1938 Mercedes-Benz Gelandesport 170VS Alpine racer will command top dollar. This car is purported to be the first of 10 Alpine racers built and the only one known to have survived. The car is a Concours hit in 2019 claiming the Chairman’s Choice Award at Amelia Island (seen here at HistoricRacingNews.com) and the International Journalists Award at the Greenwich Concours d’Elegance.

Saturday could well turn into Super Saturday with a head spinning line up of cars. Fifteen Ferraris will go under the gavel. Included in that group, a stunning 1967 330 GTC offered at no reserve, a ’73 Dino, a LaFerrari expected to top 3.5 million dollars, a ’73 365 GTB/4 Daytona with less that 15 thousand original miles, a rare 575 Superamerica, a F430 Spider, a ’17 F12 Berlinetta 70thAnniversary edition and just for fun a ½ scale F1 car.

Not to be out done Porsche fans will see 23 of Stuttgart’s finest cross the block. Stars of this group include two 918 Spyders, one a Weissach edition that should top 1.5 million dollars.  Also keep an eye on four 911 customs from DP, the renowned Porsche customizer. These 935 look alike road cars were produced for the likes of Car & Driver for a test piece and none other than Mario Andretti.

Rivaling the Ferrari LaFerrari, the 2017 Pagani Huayra Roadster could set the price benchmark for Mecum this year.  This ultra-rare supercar is one of only 100 produced by Horacio Pagani, and has only 126 miles since delivery. With the six- liter twin turbo charged engine putting out over 700 horsepower the top speed of this attention getter is over 230 MPH.

Finally, this something for everyone auction boasts no less that 9 street rods from the Blackie Gejeian Estate will be offered, seven of those at no reserve. Gejeian is often credited with being one of the godfathers of the Hot Rodding hobby. The star of this group could be the 1929 Ford known as 'The Emperor'. Originally built by George Barris The car was a ‘60s star winning the America’s Most Beautiful Roadster award and was featured on the cover of Hot Rod magazine in July of 1960.