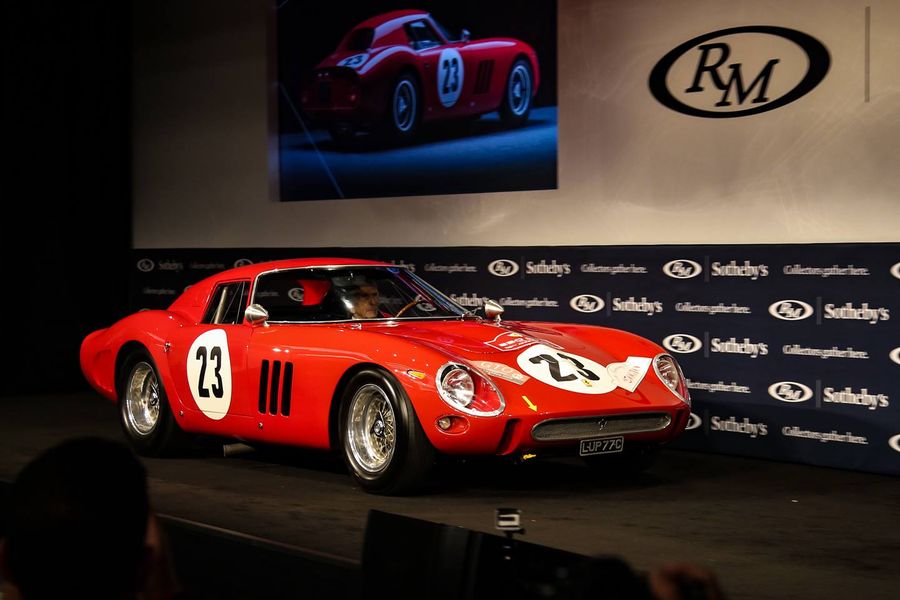 One year ago RM Sotheby’s stole the show at Monterey Car Week with the block-buster sale of a 1962 Ferrari 250 GTO for 48 million dollars on the way to realizing a record shattering sale of 158 million dollars. The 2019 RM line-up might not be able to challenge that record but the stunning quality of the 189 lots (at time of this writing) could very well push RM to the top of Car Week’s sales list again when they cross the block starting August 15th.

I would normally begin any RM Sotheby’s preview with a look at the brace of Ferraris that will go under the hammer. However, this year I will begin with Porsche, because in the 21 Porsches currently on offer we find what could be the sleeper car of this year’s Car Week auctions: the 1939 Porsche Type 64.

This car many experts believe is the most historically important Porsche ever offered for public sale. It is the first and sole remaining car of three that were built and is the first car to ever bear the script name 'PORSCHE' across the front.

In September of 1938 Prof. Dr. Ferdinand Porsche, during his consultancy with the early state-run Volkswagen, proposed a sports car version of the Beetle, then known as the KdF-Wagen. Called the Type 114, the car was a huge departure from the state’s ideas for a car for the common man. The Deutsche Arbeitsfront board rejected the concept so it was consigned to the draftsmen’s files.

Despite the rejection two unrelated things then saved the sports car concept. First, Volkswagen was having trouble with performance of the narrow tires on the Beetle. They saw in the sports car ideas a way to help solve that issue, so they commissioned Porsche two weeks after the government dismissed by the idea. That alone only gave the uncompromising Porsche a glimmer of hope of resuscitating the project. It was the announcement of a 940-mile Berlin to Rome road race, drummed up as a public relations stunt for the Axis powers of Germany and Italy that saved the day. International interest in the event prompted an order in the spring of 1939, from the National Socialist Motor Corps, to produce three of the sports cars and Project Type 64 was saved.

Because the car was property of Volkswagen, Dr. Bodo Lafferentz, the head of the German Labour Front, appropriated the first completed Type 64, chassis no. 38/41. After Lafferentz crashed the car in ’39, Ferdinand’s son Ferry Porsche pushed for the completion of the other two cars for testing and experimentation despite the ultimate cancelation of the Berlin to Rome race.

In the late stages of WWII members of the U.S. Seventh Army’s “Rainbow” division commandeered the second car. They promptly decapitated the car and drove resulting “cabriolet” into the ground, leaving it as road side junk after blowing the engine.

In June 1940 the third body was completed but apparently not mounted on any chassis until after Lafferentz’s accident in the first car. At this point 38/41 was repaired at Porsche.  This account is Corroborated by correspondence between Otto Mathé, who purchased the car in 1949, and Porsche, documenting numerous concerns with the Type 64 after his purchase. These complaints accurately refer to the damage sustained in the accident and the subsequent repairs made by Porsche. Regardless, 38/41 would become the sole surviving example of the three planned cars, and it lives on today as proudly offered by RM.

Very similar in profile, the Type 114 and the Type 64 exterior drawings are easily recognizable as the basis of the Gmünd 356 (left) coupe that was to follow, and therefore can be viewed as the earliest expression of Porsche’s singular design evolution. Famed Porsche enthusiast, racer, and filmmaker Jeff Zwart combined with Porsche factory driver and student of the brand, Patrick Long, to create this tribute to this one of a kind offering for RM Sotheby’s:

The other Porsche turning heads will be the 1960 Porsche 718 RS 60 Werks Spyder. One of only four works RS 60s ever built this car (Chassis #718-044) was raced at the 24 Hours of Le Mans, the 12 Hours of Sebring, the Targa Florio, Nurburgring and the Bahamas Speed Week. The drivers who have raced it are a virtual “who’s who”, Stirling Moss, Graham Hill, Dan Gurney, Jo Bonnier, Bob Holbert and Hans Hermann.

The car is offered in the livery of the 1961 Targa Florio.  Entered by Lucky Casner’s Camaradi team with help from the factory. Graham Hill teamed with Stirling Moss and dominated the event until a differential seized 8-kilometers from the finish leaving Moss parked along the roadside. The car had greater success in America in the hands of Bob Holbert. At Bahamas Speed Week Holbert claimed two overall wins and a class victory in the fall of ’61. Throughout 1960–1961, 718-044 participated in 21 races with four outright wins and six class wins.

While those two choice Porsches will demand top dollar, the 31 Ferraris on offer (11 with no reserve) should dominate the top of the sales charts as well. While none are expected to reach the level of last year’s record setting GTO, there are some top shelf offerings.

For this reporter chief amongst them is the 1962 Ferrari 196 SP by Fantuzzi. This car was Ferrari’s first mid-engine sports prototype and was a key step in the development of the wildly successful P-cars. This particular car (chassis# 0806) was flown to New York after a pre-season press launch at Maranello, where it was raced at the ’62 12 Hours of Sebring under the banner of Ferrari importer Luigi Chinetti’s North American Racing Team (NART). Buck Fulp and Peter Ryan drove the car to a 3rd place finish in class, 13th overall.  The car was also raced at the Nurburgring 1000km with Pedro and Ricardo Rodriquez behind the wheel where it was spun and ended the race in a ditch.  t the end of the ’62 season the car was returned to the US where the car had great success in the hands of the likes of Doug Thiem, and Bob Grossman. The latter taking a class victory and a runner-up finish at the Nassau Bahamas Speed Week races in 1963.

That racing Ferrari is just the appetizer. The main course is a Ferrari smorgasbord complete with three 250s, two 275 GTBs, two Pininfarina 365s one a GTS and one GTC all from the 60s.

In the newer models you will find the five Ferraris from the Ming Collection on offer. A 1985 308 GTS Quattrovalvole offered without reserve leads the way. Three spiders including a 458, F430 and a F355 serve as the warm up for the rare 2006 Ferrari FXX, which could be the high water mark for the collection pricewise.

Fans of Aston Martin DB4 and DB5 models will be flocking to the Monterey Conference Center for this year’s affair, as 9 DB4 & 5s will be on offer amongst the 33 Astons to go under the hammer. The star of the show will undoubtedly be the 1965 DB5 'Bond Car'.  As documented in our Monterey Car Week Preview (Click Here!) this car comes with all the Q Branch specified tricks and gadgets still working. Designed for the movie “Goldfinger” the wild success of that iconic Bond film caused DB5 sales to surge to an unprecedented level of production. This car DB5/2008/R was produced as a press car for the release of Thunderball in the United States.

Also turning heads with the Aston Martin fans will be two racing machines from the Fifties.  A works ’53 DB3S and a ’57 DB2/4 Mk II.

Four classic BMWs from the Henry Schmitt Collection will cross the block this year as well, a road going 3.0 CSL and three racecars. Two of the cars became famous in IMSA competition.  The first is the 1974 3.5 CSL which was the overall winner of the 1975 12 Hours of Sebring. Piloted by Brian Redman and Allan Moffat, the car claimed a dramatic victory after Redman drove seven of the races 12 hours including the final hour when he overcame a failed wheel bearing and alternator troubles that caused him to run much of the last hour in the dark with the lights off to conserve battery.

The second car is the 1978 BMW 320i Turbo. This car is one of five built and the only light weight as the steel coach works were replaced by fiberglass body works for IMSA competition. The car’s turbo engine was developed and tuned by McLaren Engines of Livonia Michigan as part of a secret program to develop a turbo engine for Formula One regulations set to go into effect in 1980. With David Hobbs as the driver, the car had eight top three finishes and won three times including Sears Point in ’78 and Hallett Oklahoma in ’79, along with the famed Road America 500 in ’79 where Hobbs teamed with Derek Bell.

The fourth and final Schmitt Collection offering is the 1989 M3 DTM Tribute car. The car commemorates the 1989 DTM winning M3 EVO campaigned by Team Schnitzer and driven by Roberto Ravaglia.

It will be interesting to see which of the street machines will bring the most interest in 2019.  Intermingled with the 189 Lots for sale, you will find five Bentleys, a 1963 Corvette Split Window Coupe, 13 Jaguars, three Maserati’s, seven Mercedes-Benz, five very elegant and immaculate Packards, and two street versions of Lancia rally cars, a 1984 Rally 037 and a ’92 Delta HF Integrale Evoluzione. 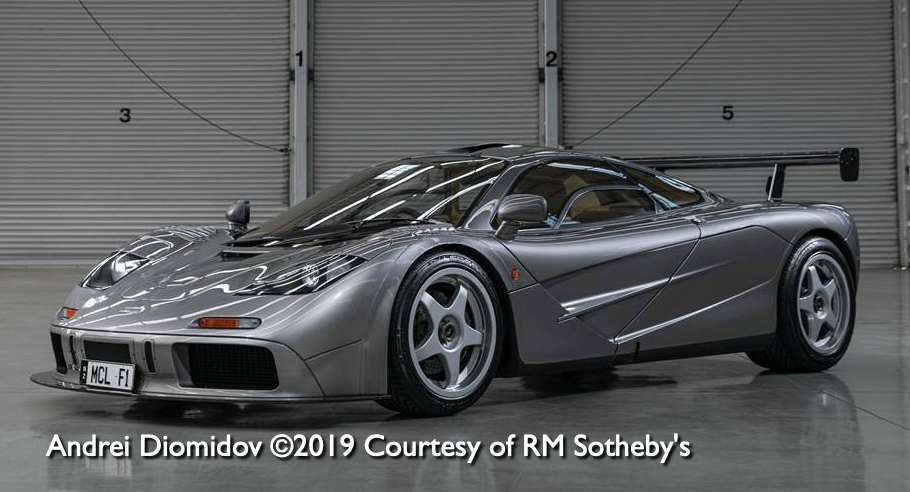 Perhaps most enticing will be two McLarens, one 2019 Senna and a 1994 McLaren F1 LM-Specification. The later of these two is a road-going rocket ship. One of 64 road cars built, this car is one of two modified to Le Mans specifications and features an unrestricted GTR racing engine and extra high downforce kit. The car is reported to have more downforce than the 1995 Le Mans winning GTR racecar.

We close out our preview of the RM Sotheby’s selections for 2019 with two unique models, one for the track and one for the road.

In 1935 MG recognized the promotional potential of motor racing. So they decided to make a splash with a three-car team at Le Mans. To guarantee headlines, they chose to use an all female driver line-up during a time when women drivers were a rarity and women racecar drivers were nearly unheard of. 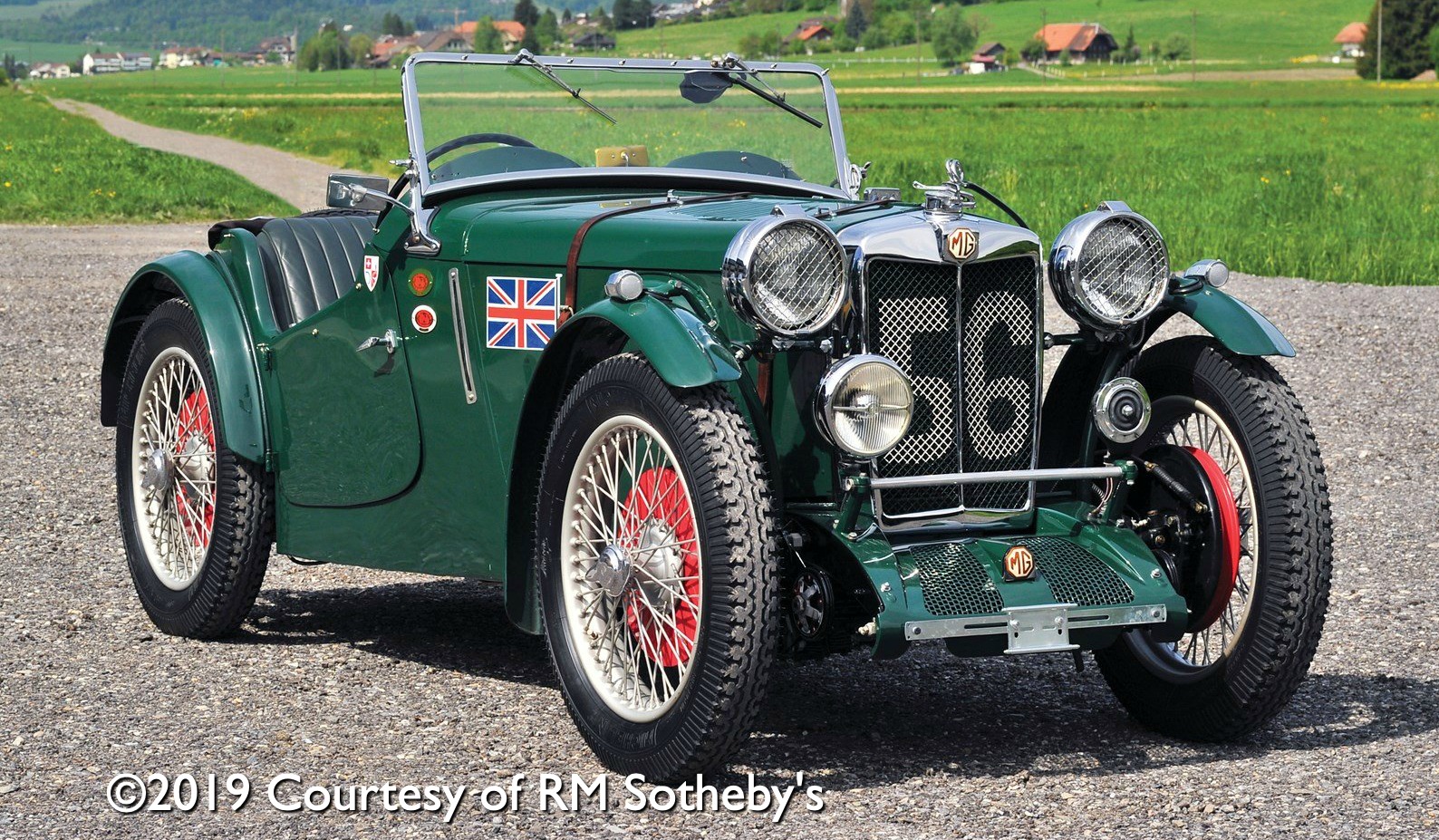 Land speed record holder Captain George Eyston was charged with assembling the three-car all woman’s team for the 24 hours. Eyston found six highly qualified drivers who were quickly dubbed “Eyston’s Dancing Daughters” by the chauvinist competition. The ladies would use three MGs PA/Bs entered by the factory. This MG PA/B Le Mans, (Chassis# PA/1711), was driven by Joan Richmond and Eva Gordon-Simpson to the 8thplace class finish in the race, leading home the other two entries as all finished 8ththru 10thin the up-to-1000cc category. This is the only “Dancing Daughters” team car to survive in original specification. Ironically, the 1935 entry contained 10 female drivers and four all female crews to set a race record that stands today.

Finally, fans of micro cars will be salivating over the 1964 Peel Trident offered without reserve.  This unique automobile is billed as the “smallest production passenger car” ever built. 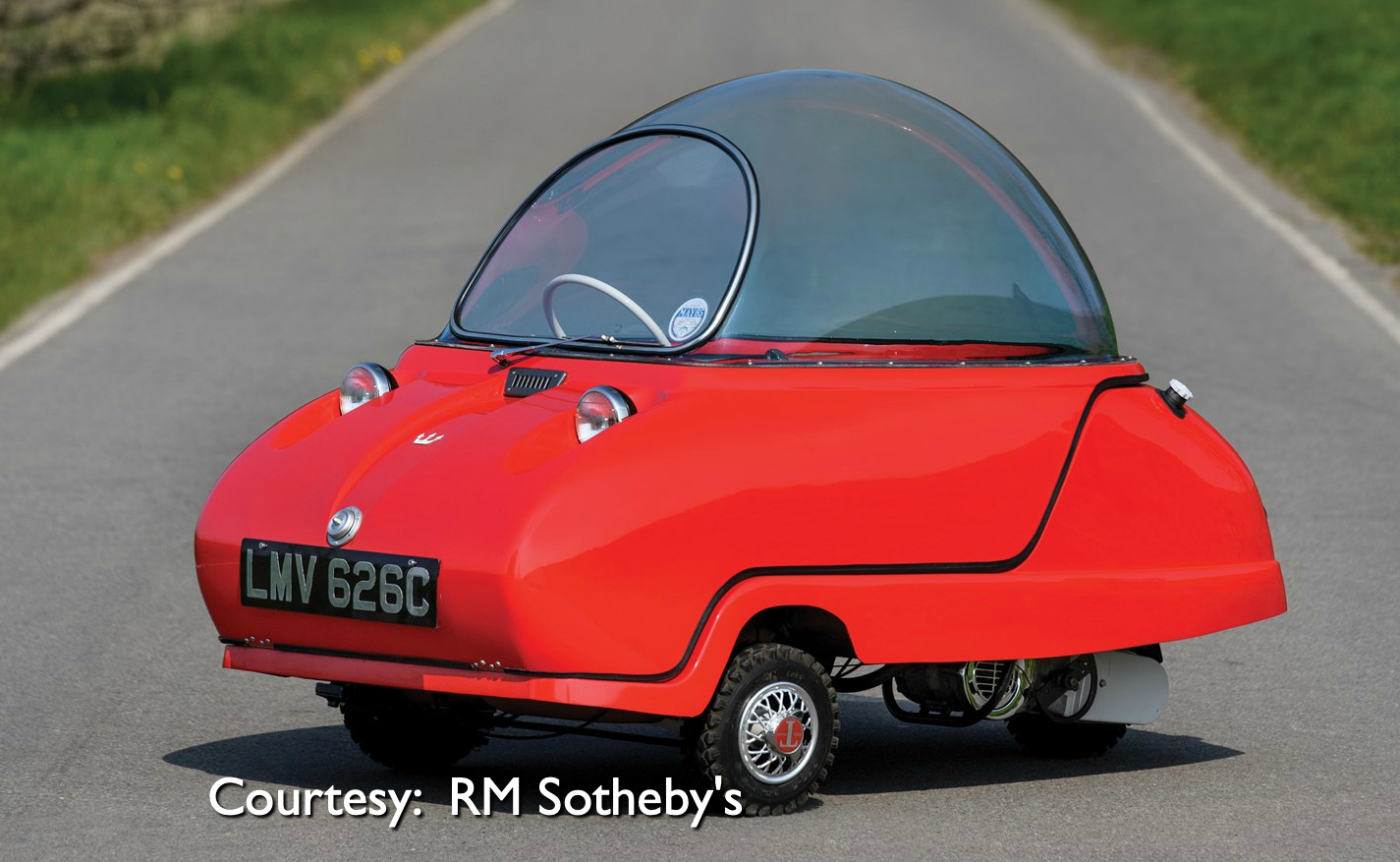 Manufactured in Peel on the Isle of Man, the Trident was the two-seater version of the Peel P50.  86 were reportedly built between 1964 and early 1966, this car being one of the first 10 produced. A 49-cc DKW fan-cooled engine drives the rear wheel by chain to power the Trident. The car boasted nearly 100mpg and gave rise to the slogan 'almost cheaper than walking'.

RM annually boasts some of the more elegant, rare and select and lots of the week and this year will be no different.