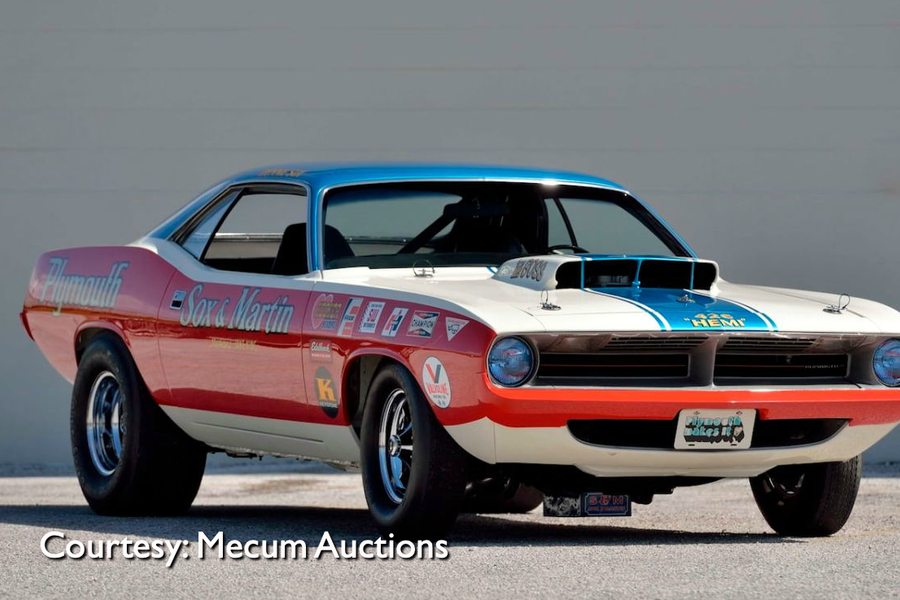 The Mecum Harrisburg auction has become one of the Indiana company’s biggest events in just three years of selling collector cars at the Pennsylvania Farm Show Complex.  2019 saw over 1300 cars cross the block and realize sales in excess of 31 million dollars a 30% increase from 2018.

The pre-event hype centered on the collection offered by Tom Werner. The group of 43 cars featured some of the most historic and significant Pro-Stock drag cars ever offered at public auction, numerous other desirable road cars and two iconic NASCAR Stock Cars.

The number of cars on offer (43) was also very significant given the two stars of the collection that were to cross the block. Those were two Plymouths campaigned by none other than Richard Petty. The first to be sold was the most recognizable stock cars ever built, the 1970 Superbird used to lure Petty back to Plymouth in 1970. The second, offered without reserve, was the 1971 Plymouth Road Runner Petty used to claim the ’71 NASCAR Grand National Championship. At the time that was the sports premier division of stock car racing. Great excitement built in anticipation of the sale of the Superbird. Unfortunately the car topped out at a bid of three million 500 thousand dollars and was not sold as it did not reach the reserve.

The no-sale on the Superbird made what turned out to be perhaps the highest priced ever paid for a NASCAR stock car at auction, the ’71 Road Runner, an anticlimax despite topping a whopping 400 thousand dollars.

The Road Runner was not the highest price paid for a car from the collection. That honor went to one of the 17 significant drag cars on offer. The 1970 Plymouth Hemi Cuda from Sox & Martin lead the collection at 429 thousand dollars. One of the cars famed drivers Herb McClandless was on hand for the sale and in a heartwarming moment his son purchased the car for his dad with a bid at the last second.

Forty one of the 43 collection cars offered sold, including all 17 drag cars. In fact cars from the Werner collection accounted for seven of the top 10 car sold in Harrisburg as the collection realized over 5.6 million dollars in sales.

Next up for Mecum will be Monterey as part of Car Week and we will have a preview of that sale in coming days.  You can check out other previews of Monterey Car Week auctions under the Auctions tab.