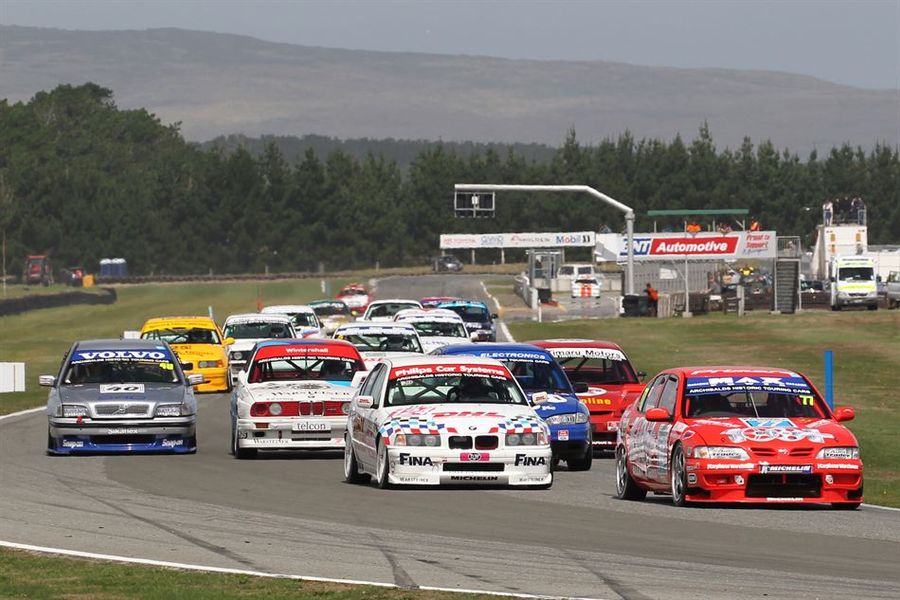 Christchurch driver Phil Mauger (Nissan Primera Super Tourer) got his Archibalds Historic Touring Car Series’ final weekend at Invercargill’s Teretonga Park off to a great start today with pole in qualifying and a pair of lights-to-flag race wins on the first day of competition at the annual Evolution Motorsport Classic Speedfest meeting.

But with Radisich having to return to Auckland immediately afterwards, Mauger won the second six-lapper later in the day by a greater margin,

Fast-starting Christchurch car dealer Bruce Miles finished third in the first race and runner-up in the second – after edging out Mauger early on and briefly holding  the lead – while Dunedin driver Arron Black finished fourth in the first race in his BMW E30 M3 and fourth in the second (after engine trouble in his car) in fellow Dunedin driver Warren Good’s ex BTCC-wining E36 coupe.

Local man Scott O'Donnell – who now owns three ex-Paul Radisich historic touring cars – enjoyed a strong day of his won in his recently acquired ex-Wolf Racing German Touring Car Series Ford Mondeo, working his way from the back of the field (after blowing a CV joint before he could post a qualifying time) to pip his Uncle Lindsay O’Donnell’s Volvo S40 on the last lap for fifth place in the fist race then finishing third in the second.

Kevin Pateman was once again the first of the NZTC entrants, crossing the line in his Ford Telstar in sixth place in the first race then fifth in the second after running as high as third early on and enjoying  a race-long battle with Arron Black in the Warren Good ex BTCC BMW before buttoning off on the final lap with an alternator issue.

Nick Young was an early retirement in the first in his BMW, while Allan Dippie made it to the fifth lap but slowed dramatically on the final one in the ex Radisich Ford Telstar. Brett Stevens also lined up for but didn't make the start of the race in his Ford Sierra RS500 Cosworth.

After mssing out on qualifying thanks to a flat battery Stephen Grellet started and finished the race (in 13th) place in the other ex-Paul Radisich car in the field, the ex BTCC Peugeot 406 but was a late dnf in the second.

There are two more race for the Archibalds Historic Touring Cars tomorrow.