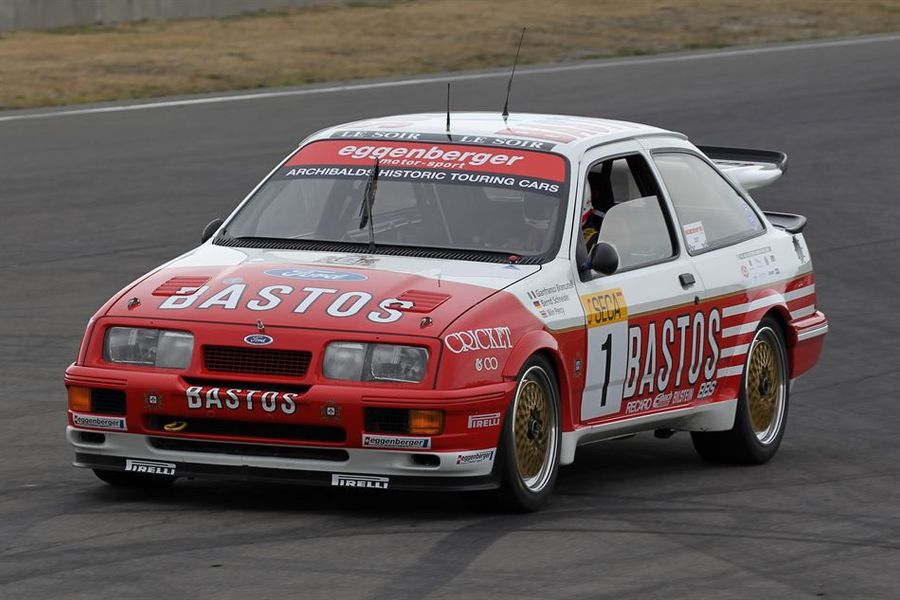 Kiwi Historic Touring Car owners Peter Sturgeon and Graeme Cameron flew out to the UK this week to prepare for three of the biggest and most prestigious race meetings on the European summer historic motor racing calendar.

The first is the Richard Mille Nürburgring Classic in Germany between June 14th and 17th. The second is the Spa Summer Classic in Belgium a week later (June 22nd-24th), and the third is the 2018 Silverstone Classic in Great Britain in July (20th-22nd).

Sturgeon, from Christchurch, owns several historically significant historic touring cars and this year is fielding Italian Gianfranco Brancatelli in the Bastos-liveried, Eggenberger-built Ford Sierra RS500 Cosworth which – with Winn Percy, Bernd Schneider and Brancatelli himself sharing the driving – won the 24 Hours of Spa endurance race in 1989. The car remained in the UK last year after Brancatelli drove it to victory in the Group A class at the 2017 Silverstone Classic event.

Cameron, meanwhile,  has shipped over his Zakspeed-built, ex-Kris Nissen Nordic Cup-winning DTM-spec E30 BMW M3 and will drive it himself at the three meetings.

The return ‘home’ of the two cars is big news in Germany where both were built. Plans are in play to unite Sturgeon and Brancatelli with Thomas, the son of late team owner and car builder Rudi Eggenberger and crew members from the team which ran the Bastos Ford Sierra in period at the Nürburgring meeting. And  Cameron has already accepted an invitation to base his car at the headquarters and workshop of the team which built it, Zakspeed, before and after the Spa meeting.

Two other members of the New  Zealand’s Historic Touring Car Association, Bruce Miles and Allan Scott, both from Christchurch, will also be competing at the Silverstone Classic meeting in July.

Miles is already in the UK and will race his Jägermeister-liveried ex Prince Léopold can Bayern 1997 BMW 320i Super Tourer at that meeting and at a second classic meeting at Germany’s Nürburgring in early August.

His first meeting is at Brands Hatch over the June 30th/July 1st weekend, the second is at the Silverstone Classic and the third iwill be the Oulton Park Gold Cup meeting in late August (25th-27th).