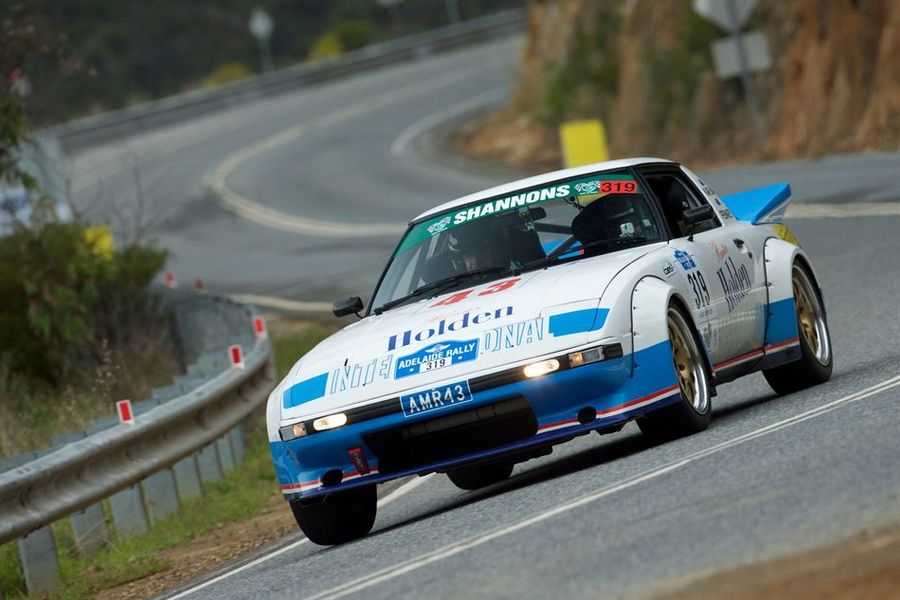 Adam Kaplan and co-driver Aleshia Penney have extended their overnight lead as day two of the Shannons Adelaide Rally saw a further eight stages contested today. The pair now lead the rally by 58.6 seconds ahead of the final group of stages tomorrow, after an emphatic day saw them steadily build their margin.
The battle for second was the closest of the day, however, with the position swapping twice in the final few stages. Matt Selley (Hartage BMW) had held second overall for the first six stages over the day, however a stunning performance on SS17 (Chain of Ponds 2) saw Oscar Matthews edge past into second ahead of the final stage of the day, where he stayed.
Meanwhile, the arm-wrestle between Neal Bates and Ben Calder in the Modern Competition section again saw the pair trade stage victories in their battle for the class lead, Bates holding on by a small margin after an intensely competitive day.
The class is set to go down to the wire tomorrow as the rally heads to the roads in the South East.
The second day of the rally first took competitors for two trials at Mallala Motorsport Park north of the City, before returning to the Adelaide hills for two runs over three of the most famous stages in Adelaide Tarmac Rallying.
The Ansteys Hill, Chain of Ponds and Corkscrew stages are iconic in the sport and were twice run today, giving competitors a driving challenge.
Kaplan and Penney led the rally by 28 seconds overnight and immediately set about building their buffer in this morning’s stages: winning four of the first five runs of the day to build a lead of nearly 50 seconds by the lunch time break.  They pushed on further in the afternoon to head to Gouger street nearly a full minute in front.
The battle for second was remarkably competitive; less than ten seconds splitting the Selley Hartage / BMW, Matthews’ Toyota and the Gunson Capri at the lunch break.
Matthews, however, charged in the afternoon: last year’s runner-up pushing his AE86 Corolla past Selley on the penultimate stage of the day and holding that margin in the final stage to hold a narrow grasp on second place. The pair are split by just 5.1 seconds ahead of the final day.
Gunson’s Capri remains 12 seconds behind the battle for second and will be ready to step up tomorrow to grab the final spot on the podium, while the McDonough / Langfield Ford Perana sits fifth, 1:43 from the lead.
In Modern Competition, Neal Bates and Coral Taylor edged out their 17-second overnight lead to make the margin 22 seconds heading into the final day.
Ben Calder and Steve Glenney pushed their Mitsubishi Lancer EVO hard to stay in touch with the four-time national rally champion and the tiny margin ensures they remain in contention heading into the final day. After the pair set identical times on one stage yesterday, today saw more tight competition.
Calder won SS12 by 0.8 seconds, while Bates stole SS14 (Chain of Ponds) by a tiny 0.9s after 1:39 of competitive driving. The pair were split by 0.7 seconds on SS15 and just 0.4 – again in the favour of Bates – the following stage. That competition carried through to the final stage of the day with Bates narrowly maintaining his margin.
David Heaton and Caleb Ash pushed their Ford Focus RS to third position, in front of the Stuart Bowes / Jeremy Browne Toyota Celica GT4.
Justin Perkins and Andrew Brabbins (Subaru) gently extended their lead over the Reynolds / Reynolds Nissan GTR in Modern Challenge, while Kristian Downing and Clayton Webber ran third today in their Subaru.
Rob Ephgrave (Porsche 911) built his lead in Classic Challenge, though at less than 30 seconds the competition with nearest rivals Steven Hevera / Stuart Cavill (Porsche 911) in close company.  The fire-breathing Category S competition has Craig Van Diemen leading Nick Streckeisen by 34.7 seconds, while Frank Kelly sits just 1.9 seconds further back.
Eleven stages will complete the Shannons Adelaide Rally on Saturday, while the Adelaide Motorsport Festival commences in Victoria Park.
The rally will head south of the city to iconic stages like Willunga Hill before finishing with a blast around the Victoria Park sprint to conclude.