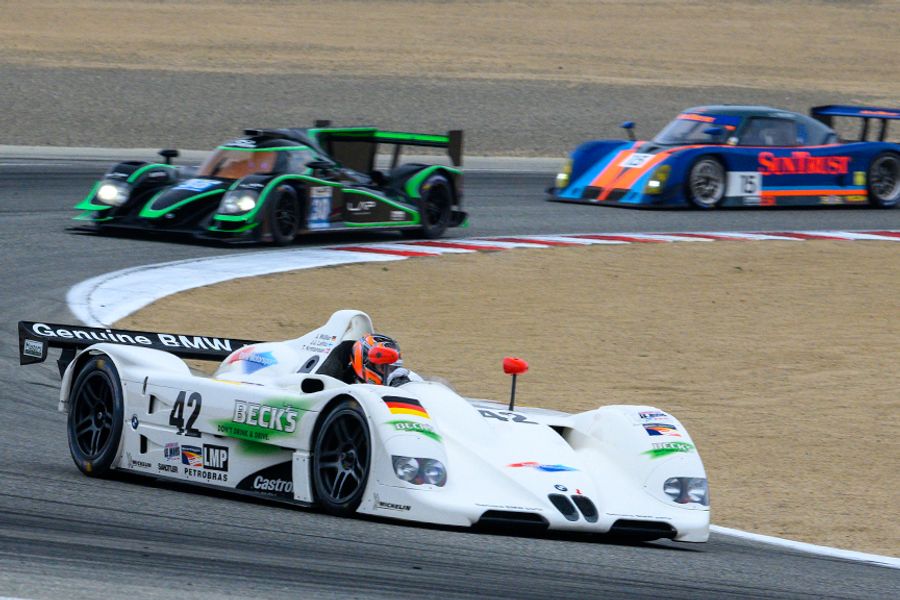 Winners Thornton, Nearburg, Bennett and Engen stole the show at the Monterey Pre-Reunion whilst Bennett, Auberlen and Thornton came out on top at the Rolex Monterey Motorsports Reunion!

The Monterey Pre-Reunion kicked off the racing activities for Monterey Classic Car week with two days of slightly quieter, more intimate racing in preparation for its ‘big brother’ the Rolex Monterey Motorsports Reunion! 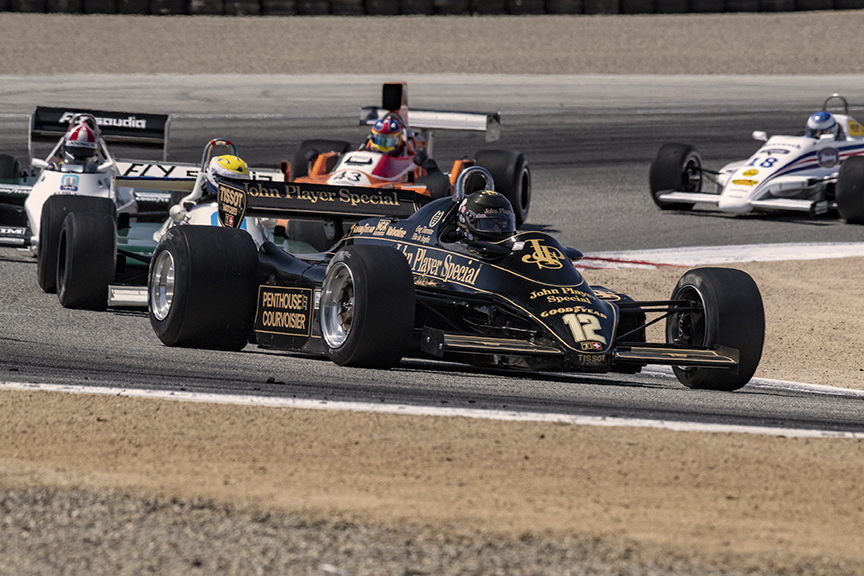 The Masters Historic Formula One USA grid had two races over the Pre-Reunion weekend, the sound of the DFV resonating around this iconic circuit! In the opening race, Greg Thornton (Lotus 91/5) set off at blistering speed, followed closely by Texan, Charles Nearburg (Williams FW07B). The chase lasted the entire race and they finished one-two. The chasing pack was glued together as Chris Farrell (March 821), Erich Joiner (Williams FWO8-C), Danny Baker (McLaren M23), Martin Lauber (Penske PC4) and Chris Locke (Lotus 77) all vied for position.

Sunday’s race two saw Greg Thornton stall at the start, but the chase was on as he threaded his way through the field to reach third place. Charles Nearburg looked confident and took an easy win, with Erich Joiner following in second place. Chris Farrell drove a great race to come in fourth with Steve Hartley (Arrows A4) just behind.

The Masters Endurance Legends USA were a new addition to the Pre-Reunion line up and they put on a great show with some stunning racing! In race one, Craig Bennett (Lola B12/80) shot to the lead ahead of Travis Engen (Audi R8 LMP) with Spencer Trenery (Riley XI Gen 1 Daytona Prototype) challenging Engen lap after lap. All three passed Erich Joiner (Lola B2K10) who’d originally qualified third. 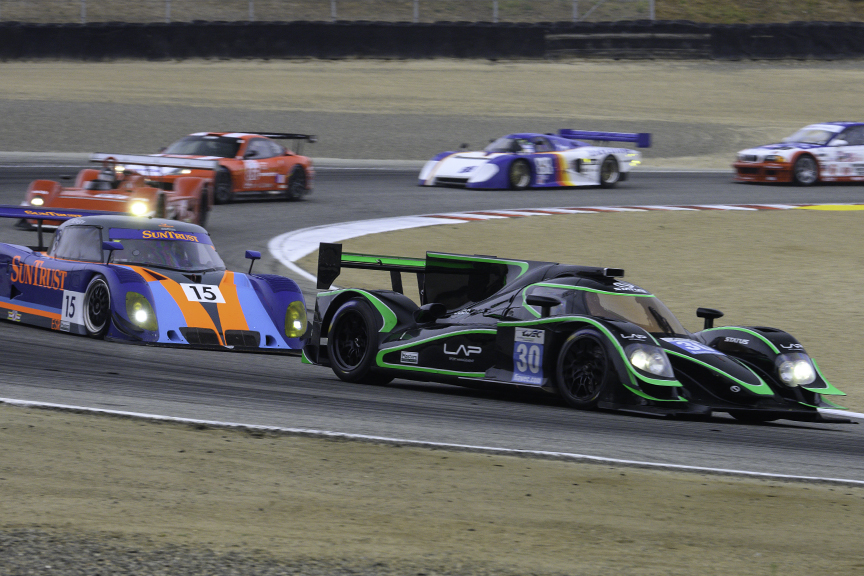 Race two on Sunday afternoon was a corker and held everyone’s rapt attention as Travis Engen and Spencer Trenery diced for the lead! They were nose to tail until the halfway point, but after the mandatory pit stops, Craig Bennett (Lola B12/80), who had started from the back of the grid and had been a distant third, managed to tuck right behind Engen, creating some very close and exciting racing in the closing laps!

Bennett and Auberlen Get Even Whilst Thornton Maintains Flag to Flag Win at The Rolex Reunion!

In the Masters Endurance Legends USA series, Former BMW Factory GT racer, Bill Auberlen, took pole in his 1999 BMW V12 LMR prototype, followed by an easy race win on Saturday. “This car is like being reunited with Apollo or the space shuttle. It’s so fast and so amazing to drive — just effortless.” said Auberlen. 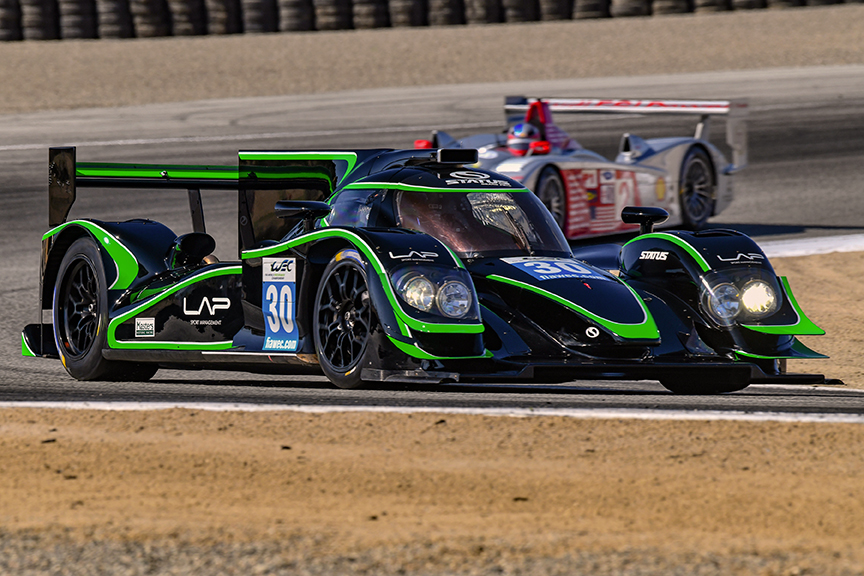 Although losing out to a spin in race one, Craig Bennett bounced back to get even with Auberlen, taking the win in Sunday’s race. A ten second lead and scorching best lap of 121.918, brought the show to a thrilling close in Bennett’s 2012 Lola B12/80 Prototype. The top-seven qualifiers included Spencer Trenery in a Riley Daytona Prototype, Travis Engen, Mark Brannon, Steven Zacchia in a Ferrari 550 GT1, and Florent Moulin in the Panoz LMP.

A stellar drive from 25th on the grid on both days, Patrick Long took the Lola B2K10 to fourth position on Saturday, which was maintained by teammate and car-owner Erich Joiner. Travis Engen in the 2005 Audi R8 LMP took fourth on the Sunday and fifth on the Saturday, after a race-long scrap for fifth with Steven Zacchia in 2002 Ferrari 550 GT1. In the GT class, BMW factory racer, Connor De Phillipi, 2011 M3 GT, cruised to the top GT spot and co-driver and North American BMW Racing Program Chief, Thomas Plucinsky took eighth overall. Zacchia took an outstanding first position in his class for all 4 races, at both events over the two weeks.

In the Masters Historic Formula One USA Series, 2018 FIA Champion Greg Thornton (UK), took pole in his ex-Elio de Angelis Lotus 91/5 and went on to take a flag to flag win on both days. A scrappy wheel to wheel field with two blown engines (Ensign MN179 of Bud Moeller and the March 821 of Chris Farrell) and a lost rear wing (Tyrrell 10, Ethan Shippert) triggered challenges of a race restart and yellow flag. Shippert ran very close in qualifying and both races, taking second place on Saturday and fighting through the field on Sunday before retiring. Thornton’s careful race strategy kept him on top.

In the non-ground effect class, there were some great, wheel-to-wheel battles involving the March 741 and 761 of Martin Lauber and Steve Romak, with the McLaren M23 of Danny Baker. Steve Romak took his class win in the Fittipaldi class and finished fourth overall in the second race on Sunday. 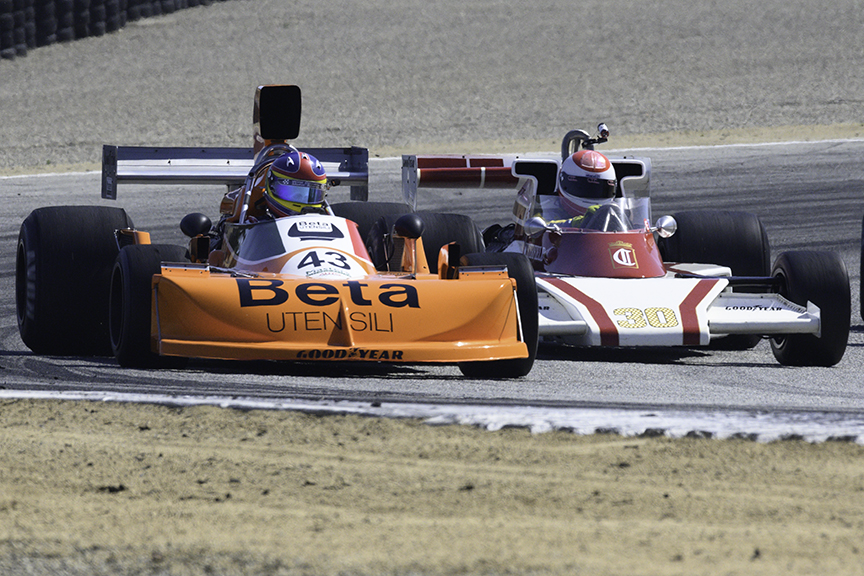 Erich Joiner marched through the field, taking second on Sunday and going from last to fourth on the Saturday, in the ex-Keke Rosberg, Monaco-winning, Saudia-liveried 1983 Williams FW08C. Ireland’s James Hagan (Tyrrell 11) took third place on Sunday and second on Saturday, enjoying a battle with local San Francisco resident, Martin Lauber (March 741). Lauber finished third on the Saturday, third overall and first in class, but unfortunately had an engine blow in the last lap of Sunday’s race whilst running in second position.

Great scraps continued throughout the field between Chris Bender’s Arrows A6, Danny Baker’s McLaren M23 and Steve Hartley’s Arrows A4.

“Everyone seems to be enjoying themselves,” commented Masters Founder and Owner and LEC CRP1 driver, Ron Maydon.

With a great variety of historic race cars, a star-studded cast of several pro-drivers, the Masters Endurance Legends USA and Masters Historic Formula One USA series’ were very well received and put on a great show in both events. 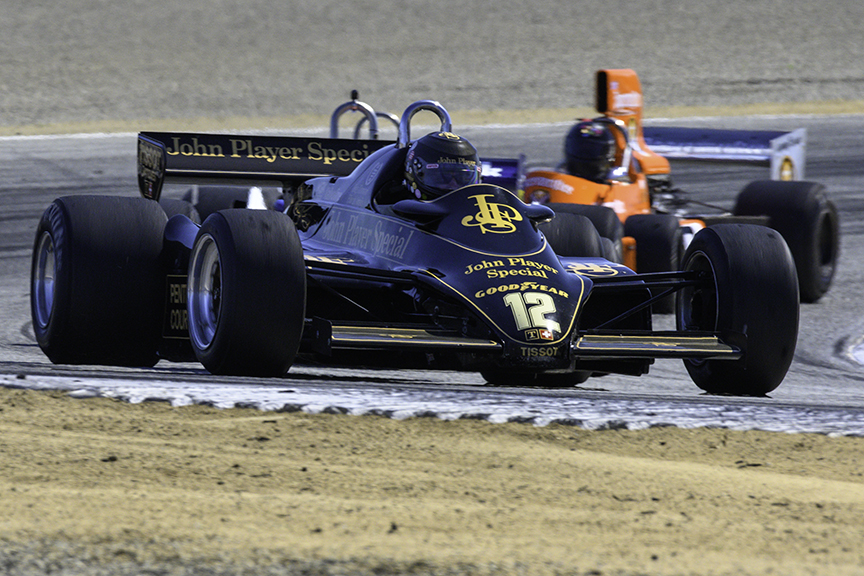 The Amelia in Monterey Race Action!