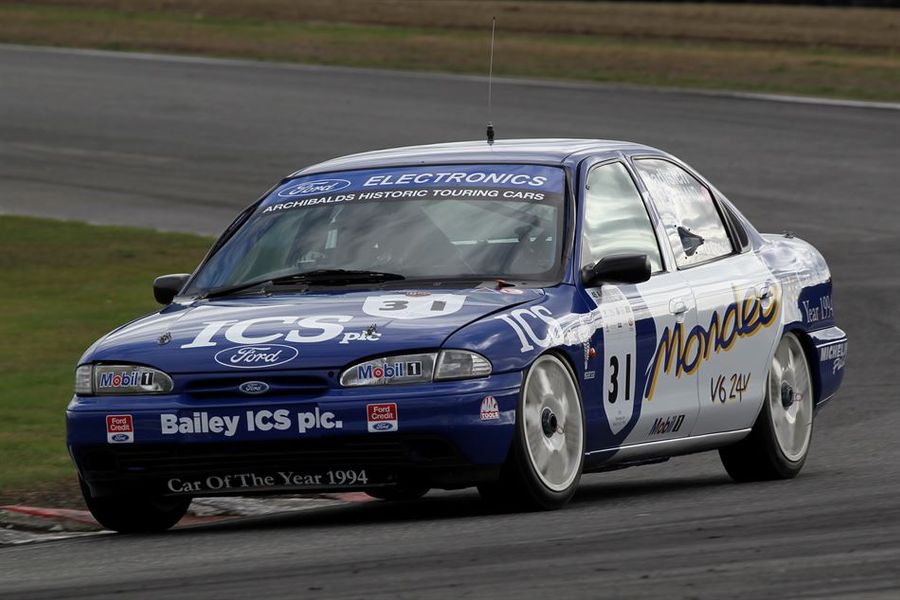 The meeting hosted the final round of the inaugural Archibalds-backed series for Group C, Group A and later model 2-litre Super Touring and NZTC series cars, and Radisich was in Invercargill as the guest of the man who now owns the car, Scott O’Donnell.

O’Donnell and wife Jocelyn are the joint driving force behind the Bill Richardson Transport World museum and Radisich spoke at the opening of a special exhibition – celebrating Ford’s competition history here in New Zealand - on Friday evening, and drove his ex BTCC Ford Mondeo at Teretonga Park in the first Archibald’s race of the weekend on Saturday morning.

Fastest qualifier Phil Mauger from Christchurch driving a Nissan Primera won that race – and one of the other three over the weekend – but after a tentative first couple of laps Radisich worked his way  from fourth to second, crossing the finish line just over half a second behind Mauger.

“I just had to wait for the rear tyres to come up to temp,” the now Auckland-based Radisich said as he was surrounded by well-wishers after the race. “Having power steering was a nice surprise. We didn’t have that when I raced the car first time around and you had to have forearms like Popeye to muscle the thing around.”

Behind Mauger and Radisich in the first race came fast-starting Christchurch car dealer Bruce Miles, hard-charging Dunedin driver Arron Black, then Scott O’Donnell in one of his other historic Ford touring cars, a rare Wolf-built Ford Mondeo Super Tourer which ran in the German 2 Litre Touring Car Championship in period.

Timaru driver Kevin Pateman started as he meant to go on in the NZTC-spec Ford Telstar he built, ran in period and still owns, snapping at the heels of the higher tech Super Tourers early on and finishing sixth ahead of Christchurch pair Steven Kelly in his ex Brett Riley NZTC BMW 320i and Matthew O’Donnell in his ex-Tony Longhurst BMW 320i Super Tourer.

Mauger also won the second Archibald’s’ series race of the weekend on Saturday afternoon, this time by a margin of 0.703 from first lap leader Bruce Miles, Scott O’Donnell and Arron Black, the latter behind the wheel of fellow Dunedin driver Warren Good’s ex-Tim Harvey, BTCC-winning BMW E36 coupe after an engine issue side-lined his own E30 BMW M3.

Kevin Pateman was once again the first of the NZTC entrants to finish the race, crossing the line in his Ford Telstar in fifth after running as high as third early on and enjoying  a race-long battle with Arron Black before buttoning off on the final lap with an alternator issue.
Bruce Miles finally got the better of fellow Cantabrian Phil Mauger in the third series' race on Sunday morning, muscling his way from P2 off the start to P1 through the first corner then cleverly managing a lead he would never lose as Mauger came under attack from Scott O’Donnell for second spot.

Local knowledge obviously helped because just as Mauger was lining Miles up exiting the Loop, O’Donnell dived up the inside into the right-hand Castrol corner which follows, making a  clean pass before setting his sights on Miles.

By this stage O’Donnell’s’ uncle Lindsay  had tagged onto the back of the leading trio in his Volvo S40  Super Tourer and for the last two laps it was – literally – anyone’s race.

Miles managed to win the drag race from the final turn to the chequered flag, but the margin back to O’Donnell was just 0.031 of a second – less than a car length - with Mauger third just 0.160 of a second back and Lindsay O’Donnell fourth a  further 0.781 of a second behind.

Kevin Pateman remained the quickest of the NZTC entrants in fifth place with Christchurch’s Simon Crampton in his E30 BMW M3 Grp A car sixth and local man Tony Ford seventh in his Holden Commodore Walkinshaw Gp A car.

Bruce Miles also won the final Archibalds series race of the weekend, this time by  a margin of over four seconds from Scott and Lindsay O’Donnell with Phil Mauger recovering from a half spin at Castrol on the third lap (while in second place) to cross the line in fourth place.

After another race-long battle Warren Good edged away from Kevin Pateman to claim fifth place with Pateman sixth, Tony Forde again seventh, Simon Crampton eighth and Graeme Clyde in the ex Craig Baird NZTC series BMW 320i this time getting the better of good mate Steven Kelly in his ex Brett Riley example.