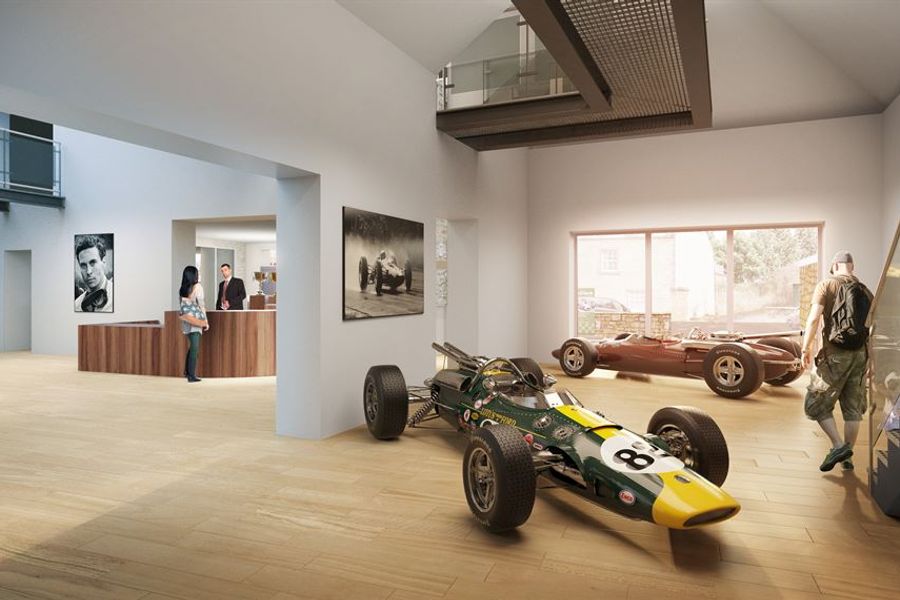 The Jim Clark Trust has been awarded official charity status to help fund raising plans for a new Jim Clark Museum by 2018 to celebrate the life and legacy of the double Formula One champion and one of Scotland’s most famous sporting heroes.  The Trust was confirmed as a Scottish Charitable Incorporated Organisation (SCIO) to coincide with an application to The Heritage Lottery Fund by Scottish Borders Council in November to support plans for a £1.65m new museum project in Duns, Scottish Borders. Scottish Borders Council has committed £600,000 to the project and hopes to secure £700,000 from The Heritage Lottery Fund, with an additional £300,000 through fundraising with the support of The Jim Clark Trust.
The Jim Clark Trust, run by the family of Jim Clark, will focus on three themes: heritage, education and inspiration, and can now welcome support from the general public and sponsorship enquiries thanks to its official charitable status.
To help promote plans for the new museum, which is backed by Hon. President Sir Jackie Stewart, three new Patrons have been appointed in recognition of their friendship with Jim Clark, the Scottish Borders and Scottish motor sport: Ian Scott-Watson, Jim Clark’s early mentor and close friend with the Border Reivers racing club; Andrew Cowan former rally driver and founder of Ralliart; and Hugh McCaig, Chairman of the Scottish Motor Racing Club (SMRC) and Team Principal of Ecurie Ecosse.
Ian Scott-Watson is widely regarded as the person responsible for Jim Clark’s early racing career competing in saloon, sports cars and rallies, both young farmers living near Duns close to the Charterhall and Winfield airfield race circuits with the Border Reivers. Scott-Watson commented: “I feel very privileged to be able to help the Trust in their work connected with the proposed Jim Clark Museum and in raising funds for this worthwhile project. I am sure that those legions of fans who have visited the present Jim Clark Room in Duns and others from all over the world are looking forward to supporting this project and visiting the museum in time for the 50th Anniversary of Jim's tragic death in 1968.”
Andrew Cowan was raised in Berwickshire as a fellow farmer and friend of Jim Clark, learning to drive on the quiet twisty country roads, in the fields and off road. Both young drivers were active with the Berwick & District Motor Club when Clark gravitated to open-wheeled racing and Cowan to off-road rallying. His distinguished professional racing career included endurance rallies around the world winning the London-Sydney Marathon and then as founder and Director of Ralliart winning four consecutive WRC titles with Tommi Makinen 1996-1999 with Mitsubishi.  Cowan commented: “I am delighted to become involved with the Jim Clark Trust as a Patron and have been actively following developments over the past few years. Jim Clark’s legacy grows year by year, and plans for the new museum will increase the interest in his life and the history of Jim’s many great motor sport achievements throughout the world. The prospect of exhibiting some of the famous cars in which he raced will be both an inspiration and education, attracting people to Duns and the Scottish Borders.”
Hugh McCaig has been a driving force integral to Scottish motor racing for over 30 years, responsible for reviving the famous Le Mans winning Ecurie Ecosse team and supporting some of Scotland’s most successful modern racing drivers including David Coulthard, Allan McNish and Dario Franchitti, all supporters of The Jim Clark Trust. The current Chairman of The Scottish Motor Racing Club commented “To be invited to join The Jim Clark Trust and to be associated with other such notable Patrons already on board is an honour. I look forward to helping the Trust achieve its goal of a new enlarged museum to celebrate the life of Jim Clark, who inspired a generation and is still recognised to this day as one of the greatest drivers of all time around the world.”
The new museum project was first launched in 2013 at the Goodwood Revival with over 20 historic cars in which Jim Clark raced. Many of those cars have since joined celebrations in Duns in 2013 and 2015 for the Jim Clark Weekend organised by the Trust and Club Lotus featuring classic racing, F1 and modern sports cars, attracting thousands of visitors and interest in the project.
The current museum is run by Scottish Borders Council with over 100 historic trophies donated by the family of Jim Clark. Since 1969 it has attracted over 300,000 visitors. Plans for the new, expanded museum to open in the Spring of 2018 include expanding the current collection with new memorabilia to inspire future generations with a celebration of Jim Clark’s incredible career and appreciation around the world; with trophies, pictures, an education zone linked to engineering, design and technology, film footage and some of the cars in which he raced.
The new museum is expected to attract in the region of 12,000 visitors a year delivering significant tourism, local business and economic benefits to Duns and the Scottish Borders, with growing support for a regular Jim Clark Weekend event potentially every two years in recognition of Jim Clark’s unsurpassed achievements in motor racing.
Jim Clark is widely regarded as one of the greatest and naturally gifted motor racing drivers of all time, a national hero for Scotland and international icon of the 1960’s still much admired around the world to this day. He was a farmer at heart, revered not just for his ability in all types of motorsport and partnership with Colin Chapman and Team Lotus, but also for his sportsmanship and modesty.
Born on 4 March 1936 in Fife, Jim Clark was a young boy when his family moved to Edington Mains Farm in Chirnside, Duns, and died tragically during a Formula Two race at Hockenheim in Germany in April 1968.