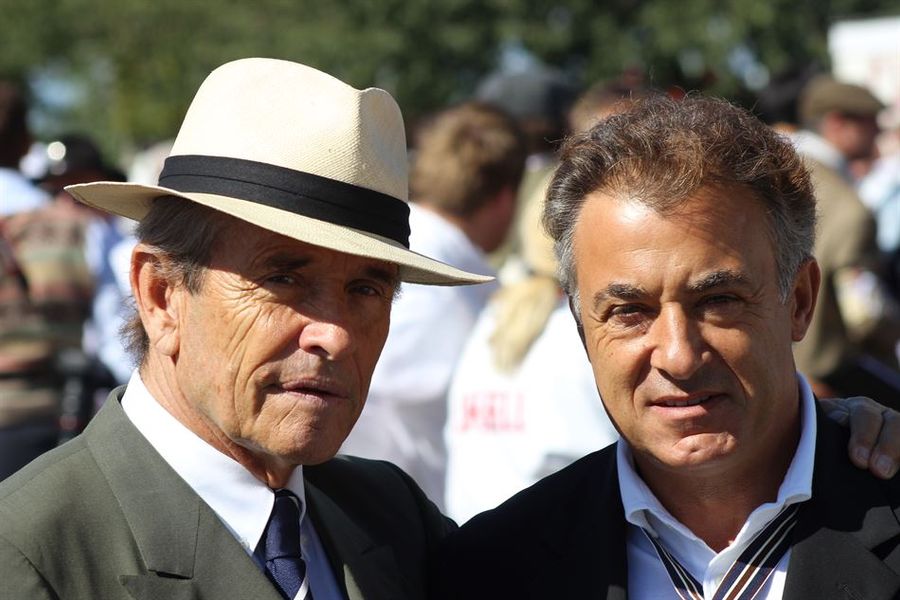 Picture: Jacky Ickx (L) and Jean Alesi at the 2016 Goodwood Revival (HistoricRacingNews.com)
Jacky Ickx, one of the world’s greatest all-round racing drivers, will be the guest of honour at the inaugural Historic Motorsport International. He will officially open the show at ExCeL, London at 12 noon on Thursday, 23rd of February 2017 and will be sharing his remarkable experiences with visitors on both Thursday and Friday. Ickx will also be honoured at The Gala Evening on Thursday at The London Classic Car Show, which takes place alongside HMI at ExCeL London.
Having earned his spurs winning several notable titles on two wheels as a teenager, Ickx’s unrivalled motor racing record includes no fewer than six victories and three second place finishes at the Le Mans 24 Hours and two World Endurance Championship titles. Indeed, his outstanding record of 48 victories – not to mention 82 podiums – in WEC remains unmatched to this day.
The Belgian, now aged 71, also won eight Formula 1 Grands Prix (finishing runner-up in both 1969 and 1970 World Championships), claimed 25 F1 podium finishes and was the European Formula 2 champion in 1967. He also won the 1966 Spa 24 Hours, the 1979 Can-Am Championship, the 1983 Paris-Dakar rally and Australia’s greatest race and the Bathurst 1000 in 1977. His career began in the early 1960s and lasted until 2000 when he took part in his final Paris-Dakar rally.
“Jacky Ickx is a genuine legend of motorsport and who better, as unquestionably one of the greatest all-round drivers, to open the first ever Historic Motorsport International event in February 2017,” said Ian France, Show Director, HMI.
Ickx himself is delighted that his career is being celebrated at both HMI and the parallel London Classic Car Show. “This is a huge honour to open an exciting new show dedicated to historic motorsport right in the heart of London,” he said. “Whether it was winning Le Mans three times with Derek Bell or competing at Silverstone and Brands Hatch, I have always been lucky enough to have had a wonderful relationship with the British racing community and that’s why I’m so thrilled to have these very special dates in my 2017 diary.”
Despite being in its first year, Historic Motorsport International has already proved its popularity and organiser Brand Events, has already had to increase the size of the show to meet exhibitor demand.
Aimed at everyone involved in or interested in historic racing and rallying – drivers, teams, event organisers, preparation experts, promoters, marshals and spectators – among the exhibitors lined up are the sport’s governing bodies, leading organising clubs including the Historic Sports Car Club, Motor Racing Legends, Masters Historic Racing, the Classic Sports Car Cub and historic F1 specialists, FORCE and the Historic Grand Prix Cars Association.
The show will mark several significant anniversaries, with special displays celebrating 50-years of both Formula Ford and the Ford DFV Grand Prix engine as well as 60-years of Crosslé, the race car manufacturer which put Nigel Mansell on the road to success.
An open forum on Thursday and Friday, the Historic Motorsport Conference Programme – hosted in the show’s Supagard Theatre by motorsport broadcaster Henry Hope-Frost – will debate a wide variety of topics including Scrutineering & Eligibility, Driving Standards & Safety and the Promotion & Marketing of historic motorsport, with many leading names and contributors set to be announced in January 2017.
Among the other attractions will be competition cars for sale, ready to tackle the 2017 historic motorsport season ahead.
Historic Motorsport International will be held alongside The London Classic Car Show, now in its third year and looking to build on the record 33,000 visitors who visited the 2016 event with a target of 40,000 visitors.
Jacky Ickx Historic Motorsport International Ickx HMI