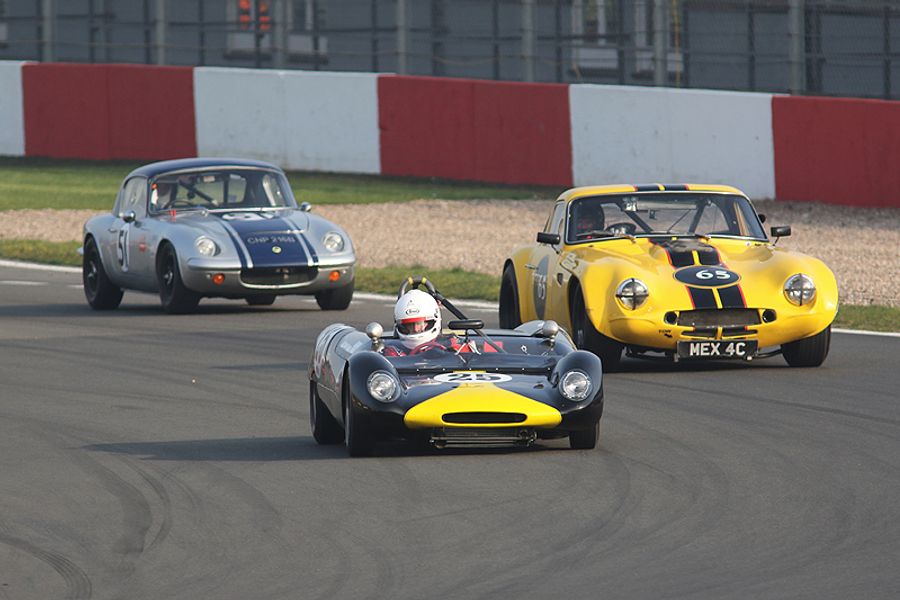 Big grids, quality racing and the welcoming atmosphere of Historic Sports Car Club race meetings will make the International Trophy another highlight of the Club’s racing season (May 18th/19th). The chance to race on the full Silverstone Grand Prix circuit is still rather rare for many weekend racers and the entry for this event reflects that fact. There are strong grids across 10 categories and the weekend marks the start of the season for three of the HSCC’s championships.

The newly re-styled Dunlop Saloon Car Cup kicks off its 2019 season, while the re-branded HSCC Thundersports and XL Aurora series also make their first appearance of the year. Add in HSCC favourites for 70s Road Sports, Guards Trophy, Historic Formula Ford, Formula Junior and Historic Road Sports and cap it off with the second round of the Jaguar Classic Challenge and the guesting GT and Sports Car Cup and it all adds up to a fine weekend of historic racing.

Topping the field for the Dunlop Saloon Car Cup, which features action from three distinct categories of touring cars from the 1970s, ’80 and ‘90s, is the mighty Ford Sierra Cosworth RS500 of Julian Thomas which comes fresh from a recent victory at Donington Park. He faces a gaggle of Super Touring cars including the Honda Accord of Paul Whight, the Renault Laguna of Mark Jones and the Vauxhall Vectra of Jason Hughes.

The reformed Thundersports category has drawn an excellent and wonderfully varied entry of sports-racing cars of the 1970s and early 1980s, including the stunning McLaren M8F of Dean Forward and the DFV-powered Lola T282 of Leo Voyazides. Among Chevrons, Osellas and Lolas are a clutch of Sports 2000 cars competing in their own class.

Rolling thunder is back in the XL Aurora races for the mighty Formula F5000s and other rapid single-seaters. Jamie Brashaw (March 73B) tops the F5000 pack while Frazer Gibney, Matt Wrigley and Mike Bletsoe-Brown will all be quick in the smaller-engined Formula 2 and Formula Atlantic cars.

Historic Formula Ford consistently delivers fabulous racing from big grids and this weekend should be no different as Cameron Jackson looks to defend his early points’ lead in the rare Winkelmann. His rivals are many and include Callum Grant, Will Nuthall, Ben Tusting and racing newcomer Pierre Livingston.

A bumper entry has been assembled for the second Guards Trophy race of the season featuring a wonderful mix of sports-racing and GT cars. Seven Chevrons from the B6 and B8 era will be to the fore in the hands of drivers like Michael Schryver and Julian Thomas, while Graeme and James Dodd (Ginetta G16) will be a real threat. The GT division is graced by the sensational Ford GT40 of Diogo Ferrao, who takes on the TVR Griffith of first round winners Mike Gardiner and Dan Cox and the very potent Shelby Daytona Cobra of Leo Voyazides.

The twin HSCC Road Sports Championships are both enjoying extremely good health and a bumper field of 35 cars will contest the second round of the 70s division. Two pacesetters will aim to get their season off to a delayed start as current champion Jeremy Clark missed Donington due to an oil leak that developed in the assembly area, while former champion Charles Barter was kept away from the opening round by illness.  The Ferrari 308GTB of John Dickson will be bidding to repeat its Donington victory.

The Historic Road Sports Championship, for the cars from up to 1969, also has a strong grid for the Peter Shaw Memorial Trophy. This race remembers the popular former champion who sadly died recently and features a clutch of rapid Morgan Plus 8s as well as the newly-restored AC Cobra of Kevin Kivlochan.

Only in action on Sunday are the Formula Juniors for round four of the Silverline UK Championship. Nick Fennell’s beautiful Lotus 27 heads the rear-engined ranks while local ace Ray Mallock (U2 Mk2), Niall Murray (Elva 100) and Michael Hibberd (Lola Mk2) are contenders in the front-engined classes.

The second round of the Jaguar Classic Challenge follows the recent season opener at Donington Park when Julian Thomas and Calum Lockie scored a dramatic last-corner victory over brothers John and Gary Pearson. Battle will be rejoined this weekend with drivers like Richard Kent and Jason Minshaw also set to join in at the head of the race. A most welcome addition to the saloon car classes is former Le Mans winner Andy Wallace who will share the Mk1 of Roger Cope.

Finally, another wonderful grid of early 1960s GT and sports-racing cars will line up for the GT and Sports Car Cup, which runs for 90 minutes on Sunday. Stunning cars and close, sporting competition are the norm for the four-race series and the AC Cobra of Leo Voyazides/Simon Hadfield should be the car to beat. More Cobras and quick Jaguar E-types for drivers like John Clark and the Pearson brothers will be contenders as will several rapid Lotus Elans including those of Andrew Garside/Andy Newall and Andrew Haddon.