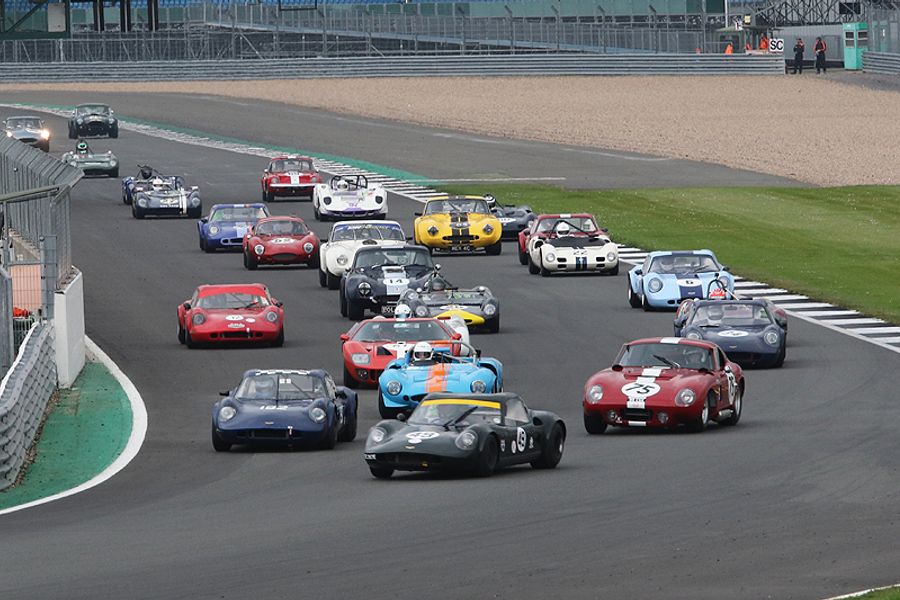 Close and exciting racing typified the Historic Sports Car Club’s annual International Trophy meeting on the Silverstone Grand Prix circuit over the weekend (May 18th/19th). In all, eight of the 14 races were decided by less than a second.

Double winners was a theme during as Cameron Jackson (Historic FF), Mark Wright (Dunlop Saloons), Marc Campfield (Aurora) and father and son Graeme and James Dodd (GT and Sports Car Cup and Guards Trophy) all bagged a brace of wins. However, none of them could be considered easy and there was plenty of close racing along the way.

Graeme and James Dodd completed a double in the 40-minute Guards Trophy the 90-minute GT and Sports Car Cup. In the Guards Trophy, as light rain started to fall at the end of the afternoon, the Dodd’s Ginetta G16 was running second into the closing stages behind the Chevron B6 of James Littlejohn and Will Schryver. Unfortunately, Will had a quick spin as the conditions worsened and immediately lost 12s of his margin as James Dodd hunted him down.

Dan Eagling was mighty in taking fifth overall and best GT car in the humble Ginetta G4R. In the conditions, Eagling exploited the handling of the former works Sebring car to overcome the TVR Griffith of Mike Gardiner/Dan Cox.

In their Jaguar E-type, the Dodds came home clear GTSCC winners although it would have been tougher had Simon Hadfield not retired the AC Cobra of Leo Voyazides when transmission noises prompted him to cruise into the pits with 25 minutes to run. After being rivals in Saturday’s Jaguar Classic Challenge, Mark Donnor and Richard Kent teamed up in the former’s Jaguar E-type to bag second while Andrew Garside and Andy Newall were a giant-killing third in their Lotus Elan.

Cameron Jackson was in the thick of three tremendous single-seater races. The Historic Formula Ford 1600 counters were typically fiercely-contested as Jackson and Callum Grant took on the Speedsport-run Merlyns of Ed Thurston, Pierre Livingston and Ben Tusting.

On Saturday, Jackson and Grant worked together to try and repel the three team mates. Jackson needed all his experience and race craft to get his Winkelmann into the right place for the slipstream down the Wellington Straight on the last lap after a late safety car restart. Grant chased Jackson over line from Thurston, who had worked up well from 12th on the grid, as Livingston and Tusting rounded out a blanket finish.

Sunday’s race was a re-run, but this time Jackson was on his own as Grant retired early with a mechanical issue. Somehow, Jackson wriggled ahead of the Speedsport trio when it mattered to head rising star Livingston to the line by less than a tenth of a second.

Jackson was back out to enact a fabulous Formula Junior lead battle with Sam Wilson. There was nothing between the Brabham BT2 and Lotus 20/22 and the lead changed several time before Wilson got to the flag a tenth of a second before Jackson. A little way back, Nick Fennell was a good third in his Lotus 27 from Adrian Russell and Mark Pangborn while sixth overall made Ray Mallock (U2 Mk2) clearly top front-engined runner.

The Dunlop Saloon Car Cup got off to a most encouraging start with a diverse field. Eventually, Mark Wright’s Sierra RS500 won both races but it was never straightforward as various gremlins struck some time race leaders Mark Jones (Renault Laguna), Ric Wood (Holden Commodore) and Max Goff (BMW M3). Goff was unlucky to lose the lead in both races to a recurring fuel pump issue.

Before the weekend, Marc Campfield had never driven a Formula 5000 car but in the pair of XL Aurora Trophy races he took his father’s Chevron B24 to a brace of wins. Other than a spin on oil in the second race, the Austin Healey racer barely put a wheel wrong. Jamie Brashaw (March 73A) gave valiant chase despite on-going fuel and gearbox issues and led the second race after Campfield spun, only to grind to a halt with three laps to run just as Campfield battled back into contention.

Frazer Gibney topped the 2-litre cars on Saturday in his first race in his Chevron B40, but on Sunday he didn’t run and Mike Bletsoe-Brown moved up to complete the overall podium in his Chevron B27.

John Burton (Chevron B26) and Leo Voyazides (Lola T282) shared HSCC Thundersports wins but Dean Forward starred in both races in his vast McLaren M8F. A mix-up with the safety car cost Burton the second race as he was later excluded for driving back through the pack to the head of the field, while Voyazides took over victory after an electrical glitch in the first race left him starting Sunday’s race from the back of the grid.

Tim and Robin Pearce beat Richard and Will Plant by a fifth of a second in a tremendous Historic Road Sports mini-enduro. The two Morgans battled for much of the 40-minute race and were split by just a fifth of a second at the flag. Battles raged all down the field as Philip St Clair Tisdall and Simon King made it an all-Morgan podium.

Charles Barter (Datsun 240Z) headed the 70s Road Sports contenders. He went clear on the opening lap and was later joined on the podium by Will and Mark Leverett in Lotus Europa and Elan respectively. Jeremy Clark was up in the mix until forced to make a quick pit stop to remove a loose bumper after a brush with a backmarker.

The Jaguar Classic Challenge got the worst of the wet weather on Saturday, but that led to a fascinating race that was only decided in favour of John and Gary Pearson at the final corner. On a slowly drying track, Pearson was able to claw back the C-type of Paul Pochciol and James Hanson but going into the 19th and final lap Hanson was still seven seconds clear. Pearson rapidly closed down the C-type before making his move at the last corner of the hour-long race. Despite a couple of moments Mark Donnor drove a fine solo race to retain third, less than two seconds clear of the Joe Osborne/Richard Kent car.