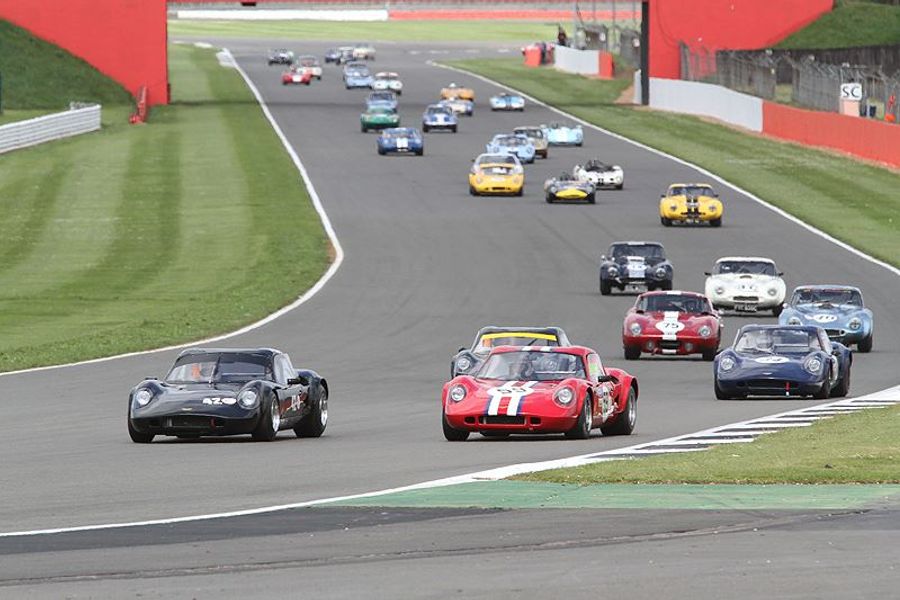 One of the biggest events of the Historic Sports Car Club’s 2018 race season will be the International Trophy meeting on the Silverstone Grand Prix circuit this weekend (16th/17th June). A superb array of categories will deliver 15-top quality races on the flowing Grand Prix track and excellent competitor support means many strong grids, including the 25-strong Historic Formula 2 field (see separate story).

Ranged against the Ginetta G16 of father and son Graeme and James Dodd will be seven cars from the Chevron B6/B8 pack, including former champion Michael Schryver and Sandy Watson, but the dark horse could be the B8 of Julian Thomas and Calum Lockie.

Rounds seven and eight of the Historic Formula Ford Championship bring another fine field of cars to Silverstone, with Ben Mitchell at the top of the points after a superb double win at Thruxton. That gave Mitchell his second and third wins of the season against fellow race winners Cameron Jackson and Richard Tarling. Sure to be at the forefront of the action will be former champions Callum Grant and Benn Simms.

After the opening four races of the HSCC Historic Formula 3 Championship, Jon Milicevic is standing proud at the head of the points in his Brabham BT21B after four wins from four starts. Now the local garage owner will want to make it six from six on home ground.

The second round of the 2018 Jaguar Classic Challenge has drawn a fine entry for an hour-long race on Saturday afternoon. Brothers Gary and John Pearson and father/son combo Graeme and James Dodd are strong partnerships, but Donington winners Julian Thomas and Calum Lockie could be fastest of all.

Sandy Watson has entered a pair of E-types, with the hard-charging Martin O’Connell and possibly Andrew Kirkaldy in the driver line-up, while former BTCC ace Anthony Reid shares the car of Vincent Gaye.

Two half-hour races will be contested by a diverse grid of sports-racing and GT cars in the opening round in this season’s HSCC Pre ’80 Endurance Series. The grid ranges from the mighty Cosworth DFV-powered Lola T282 of Leo Voyazides to a gaggle of period Sports 2000s and includes an invitation class for Can-Am cars topped by the awesome McLaren M8F of Dean Forward and the vast March 717 of Richard Dodkins.

As well as the thundering Can-Am cars, Voyazides will be challenged by a gaggle of quick 2-litre cars including the Osellas of John Spiers and Robert Parker. Quick Lolas are entered for Vic Nutter, Mark Richardson and the rapid Robert Oldershaw, who has stepped up to a T290 for the new season.

A double-header for the HSCC’s Derek Bell Trophy will turn out an array of spectacular and powerful single-seaters built and raced through the 1970s. Stars of the show will be the mighty Formula 5000s headed by the Chevron B37 of Neil Glover while Michael Bletsoe-Brown is set for a busy weekend as he is planning to race his Chevron B27 in both the Derek Bell Trophy and Historic F2 races. Another serious DBT contender will be Steve Worrad in his Formula 2 Chevron B49.

A glorious 90-minute contest for the GT and Sports Car Cup will be another highlight as drivers and teams battle in a pit-stop race for pre ’66 GT cars and pre ’63 sports-racing cars of a type that raced in the World Endurance Championship in period.

After an absorbing two-hour contest at Donington, the Jaguar E-type of brothers John and Gary Pearson took victory over the similar car of John Clark and Phil Keen and the Lister Jaguar Coupe of Fred Wakeman and Patrick Blakeney-Edwards. They are all back for a re-match, along with a gaggle of other contenders including the AC Cobra of Leo Voyazides/Simon Hadfield.

An excellent grid of more than 30 single-seaters will contest a double-header that brings together the HSCC Classic Formula 3 Championship and the URS Classic Formula Ford 2000 Series.

When the season opened at Donington Park in April it was series newcomer Lee Cunningham who took an impressive F3 double win in the rare Dallara 381/382. However, there are plenty of rivals for the Italian car, including David Shaw (Ralt RT1), Richard Trott (Chevron B43), David Thorburn (Ralt RT3), Pat Gormley (Safir RJF3) and Keith White (Ralt RT1). One of the best URS Classic FF2000 fields for several years will have to contend with Ian Pearson’s earlier Royale RP30 in the bid for category victory.