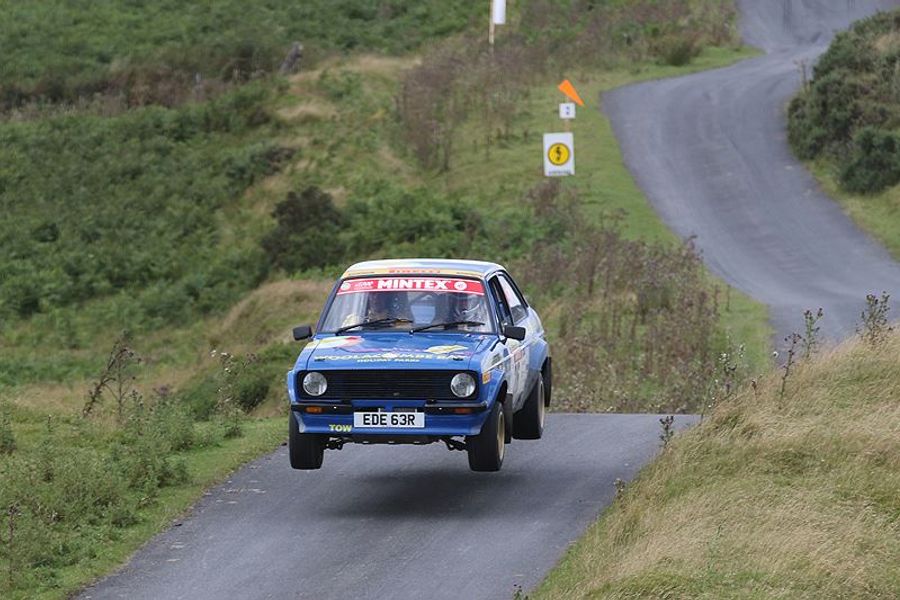 The FUCHS LUBRICANTS MSA British Historic Rally Championship moves to asphalt for round five, the Harry Flatters Rally (Sunday 29th July) as the championship contenders head to the challenging Epynt ranges in Wales.

A fabulous championship entry will line up, headed by current championship leader Paul Barrett and co-driver Dai Roberts. Barrett also heads the Rally and Competition Equipment Category 3 after a superb opening run of results, despite a devastating non-finish on the Carlisle Stages after his Ford Escort Mk2 caught fire at a stage start. Barrett does not have extensive knowledge of the Epynt roads, but he will be well on the pace and seeking another big points’ haul.

However, there are plenty of crews aiming to give Barrett a hard time and some of them have excellent form over the daunting brows and dips of Epynt. Notably, Neil Williams and Peter James rejoin the BHRC at a venue where they have always been among the absolute pacesetters. Meanwhile, back after several years away are Gareth James and Steffan Evans and they will surely be quickly back up to speed. Steadily gaining asphalt pace are gravel aces Nick Elliott and Dave Price, while regular championship contenders Rudi Lancaster/Guy Weaver, Steve Bennett/Osian Owen and Simon Webster/Jez Rogers add to a fantastic field.

A real darkhorse is the Hillman Avenger BRM of Ieuan Rowlands/Emyr Hall, which is now matching the Escorts for gravel pace. However, the package has little asphalt experience to call on and Rowlands is far from familiar with Epynt. But if it all comes together, a big result is entirely possible.

Class D3, for the Pinto-engined Escort Mk2s is delivering some outstanding pace this season and former British Junior Champion Stuart Egglestone and co-driver Brian Hodgson are currently second overall in the points. It is a while since they were on Epynt and leading the chase of Egglestone in D3 will be the similar cars of Ben Friend/Cliffy Simmons and Josh Browne/tba. Brothers Malcolm and Ronald Mounsey run in class D2 in their Talbot Sunbeam Ti.

A strong field of cars will line-up for the fifth round of BHRC2 and it is the class C2 Hillman Avenger of Graham/McCann that could set the overall pace. In class D2, for the later 1600cc cars, the Mounsey brothers will make a rare foray onto Epynt.

Topping the excellent REIS Category 1 field is the Porsche 911 of current pacesetters Rikki Proffitt/Graham Wild and Bob Bean/Miles Cartwright (Lotus Cortina). Both crews have had some recent misfortune, but will be strong on Epynt even though Bean is a rare visitor to these stages. Back in the mix is another rapid Porsche 911 for the hugely experienced Dessie Nutt and Geraldine McBride.

Right with Proffitt and Bean will be the flying Ford Anglia of Malcolm Rich/Arwel Blainey from class B3, while Bob Gibbons and Jon Harris (Ford Cortina GT) add more local strength to the Category 1 field. Both crews have the potential to be right at the head of the Category 1 contest, while Phillip Harris returns in his Mini Cooper and Ken Davies/Alan Jones switch from their Volvo Amazon to a Ford Cortina GT.