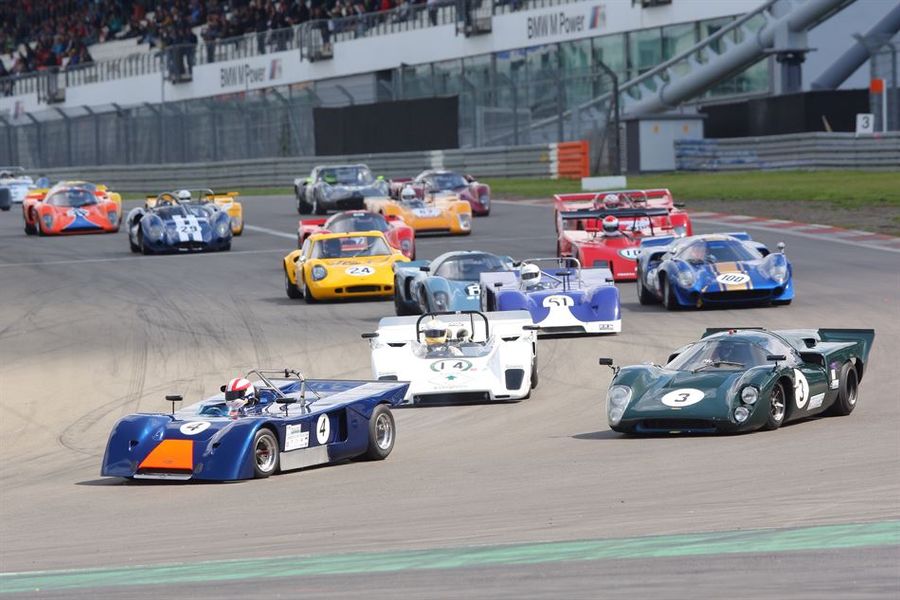 Martin O’Connell dominated the opening FIA Masters Historic Sports Car Championship race at the Nürburgring today, Saturday. Starting from pole position, he blasted Sandy Watson’s Chevron B19 into an immediate lead, and was never headed in the 30-minute race. “It was easy,” said O’Connell post-race. “To be honest though, I was paranoid! We’ve had a really bad run of late and the car has been rebuilt so I am just really pleased to have come through with no problems.” Behind the former F3 ace, Jason Wright (Lola T70Mk3B) hung on to second but was overhauled by Stefano Rosina (McLaren M8C) on the second lap. However, any hopes that the Italian had of catching the diminutive Chevron were soon dashed when he succumbed to mechanical problems and parked the mighty McLaren. That gave Wright and easy run home to second overall and honours in the Rodriguez class, while Tim Cousins took a fine third overall in his Chevron B19, taking second to O’Connell in the Marko class. In a race of attrition, Mike Wrigley (Chevron B16) took fourth and Siffert class honours after early leader Emanuele Bendini (Chevron B16) tangled with a backmarker and suffered a puncture and damaged bodywork. That forced the Italian to retire and allowed Wrigley to secure class honours. Andy Newall (Chevron B8) took victory in the Bonnier class. Pre-66 honours went to Billy Bellinger in Keith Ahlers’ Cooper Monaco Pre-66 honours went to Billy Bellinger in Keith Ahlers’ Cooper Monaco in a fantastic fifth place overall, while Simon Ashworth rounded out the top six in his Chevron B16