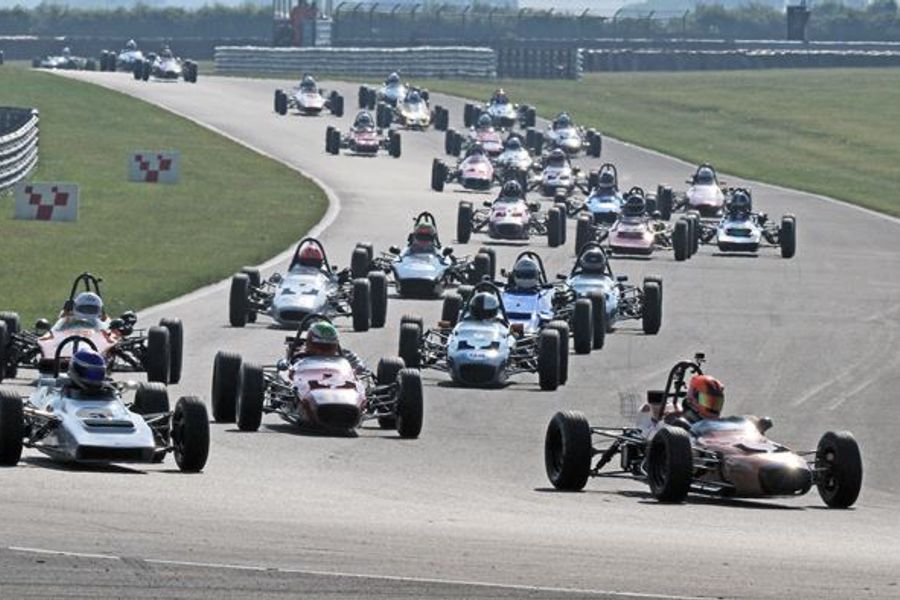 Close finishes were a major feature at Snetterton over the weekend (4th and 5th of June) for the Historic Sports Car Club’s annual race meeting at the Norfolk track. A 15-race programme included a celebration of the life of Archie Scott Brown. The second running of the Historic Archie Scott Brown Trophy race was a 30-minute invitation race for pre-1959 sports-racing cars, run in association with FISCAR. The race delivered a grandstand finish as the Lister Knobblies of Mark Lewis and Roberto Giordanelli battled mightily to the flag and the verdict went to Lewis by just a third of a second. There was also a close finish to the hour-long Autosport round of the Guards Trophy as less than five seconds covered the top three cars. Victory went to the Chevron B8 of Steve Brooks and Robert Beebee, while second overall and leading GT car, the TVR Griffith of Mike Gardiner and Dan Cox was only 3.8s behind. Less than a second down on the TVR to complete the overall podium was the Chevron B6 of Nick Thompson and Sean McLurg. Beebee completed a very successful weekend by taking two more wins in the Allcomers races. The Historic FF1600 Championship racers once again delivered some epic action across three races and there was a blanket finish in the opening race as Callum Grant headed Rob Wainwright and Sam Mitchell over the line with less than four-tenths of a second covering three cars. Wainwright won the second race from Mitchell by the comfortable margin of 1.6s as Grant failed to finish. Wainwright then elected to miss the third race, which was not for championship points, and Mitchell won as Grant fought through to second from the back of the grid. Not to outdone, the first Historic FF2000 Championship finish was even closer as Andrew Park beat Benn Simms by a coat of Reynard paint in a nail-biting dash to the flag. Sunday’s race was very much a repeat as Park and Simms raced wheel to wheel until Park was caught out by a backmarker at the last corner and had a quick spin. He still finished second to Simms as Andrew Storer completed the podium. Formula Junior Championship wins went to Nicholas Fennell (Lotus 27) and Greg Thornton (Lotus 20/22), with Thornton just beating Alex Morton (Lightning Envoyette) by a third of a second. Graham Pattle (Lotus Cortina) took a double win in the ByBox Historic Touring Car Championship races and Mark Charteris (Mallock Mk20/21) was unstoppable in the pair of Classic Clubmans races. Simon Jackson (Classic F3 Chevron B43) and Ian Pearson (URS FF2000 Van Diemen RF83) were also weekend double winners.