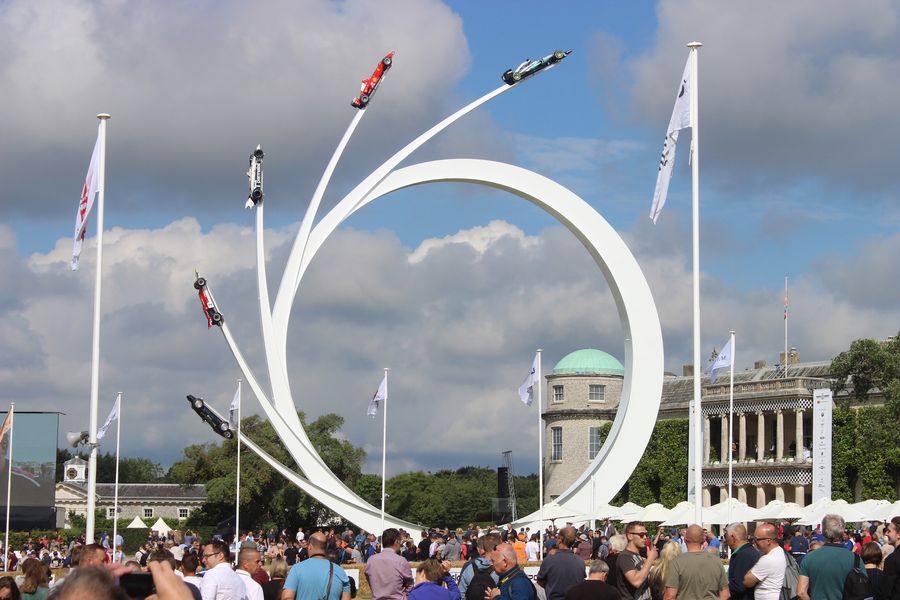 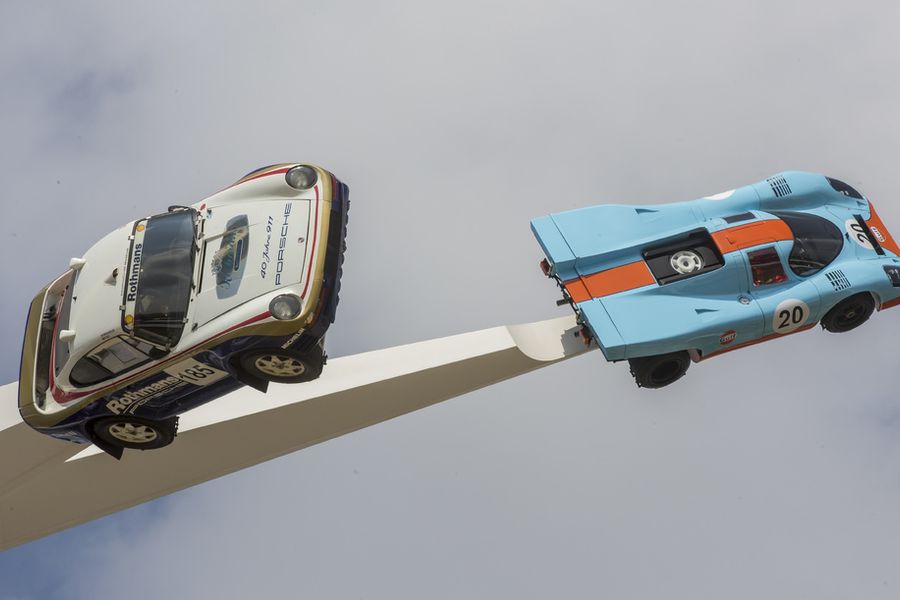 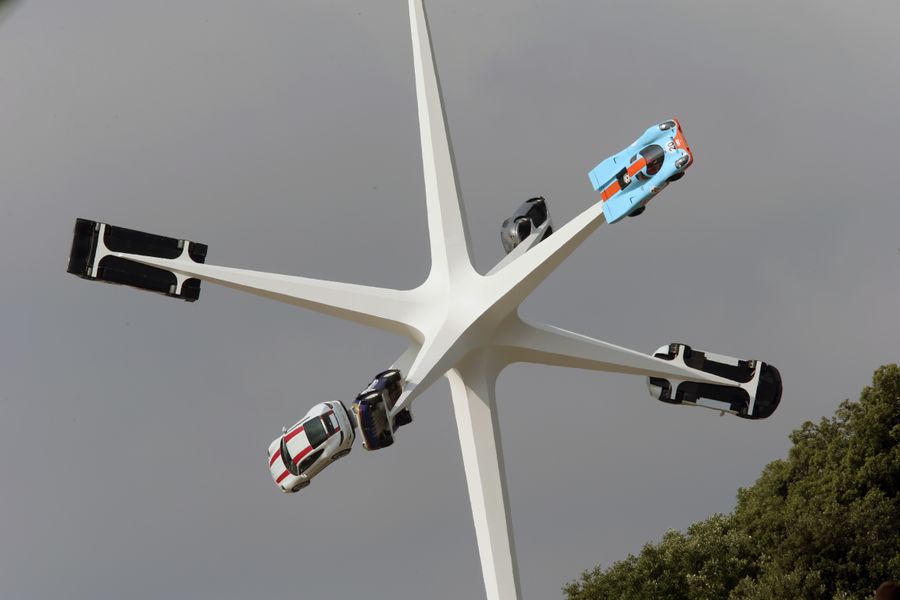 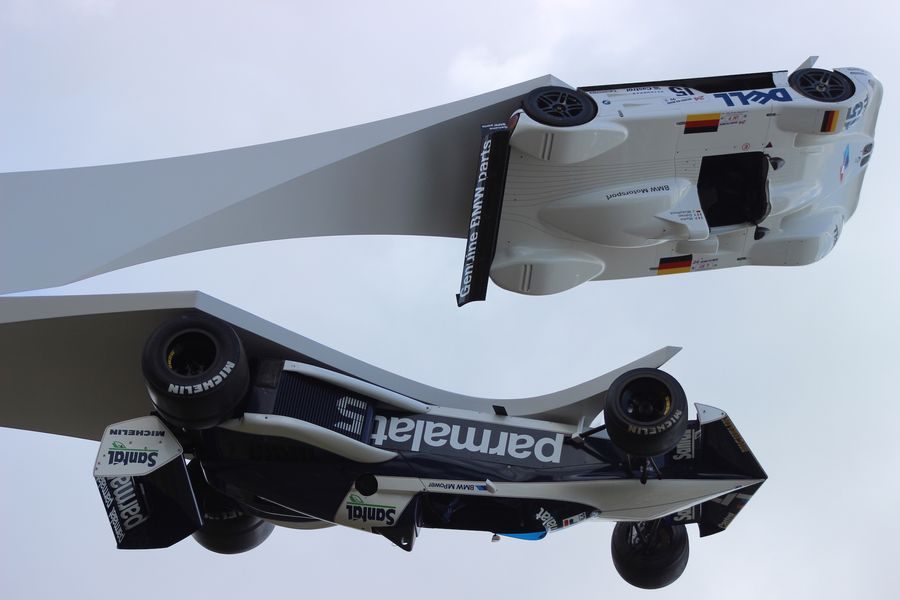 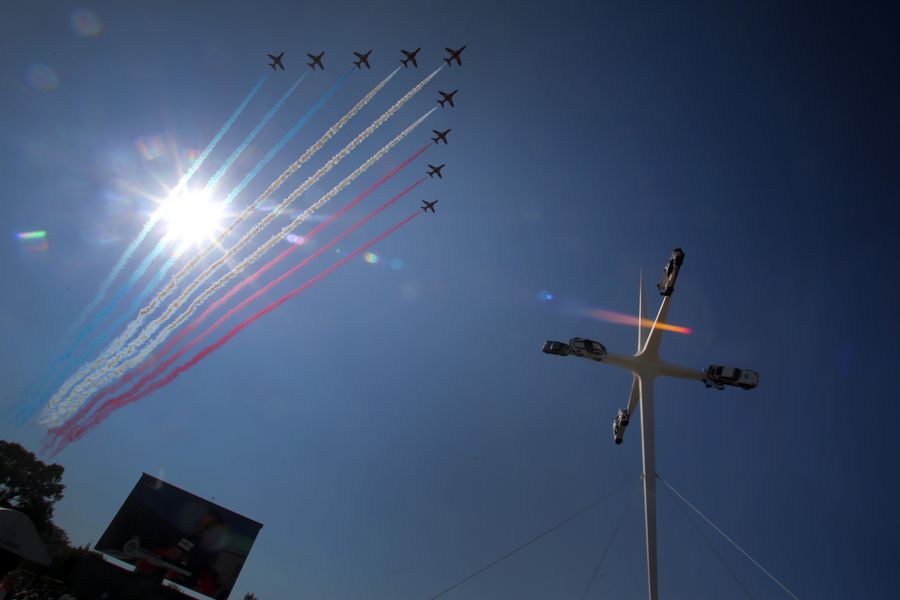 Virtually nobody among the 200,000-plus visitors to this year’s Goodwood Festival of Speed presented by Mastercard will leave without an image of the iconic Central Feature in their memory cards or mobile phones. In the course of 21 years, these dramatic works of art on the lawn of Goodwood House have trumpeted the arrival of the greatest live action festival of motoring in the world – and all of them have been created by one man.

Gerry Judah is the artist who uses up to 150 tonnes of steel, has spent months of preparation and sketched many designs, working with various engineers in order to create each of the pieces that have graced the Festival of Speed since 1997. That first Central Feature was a tribute to Ferrari, and has been followed by displays honouring the likes of Porsche, Mercedes-Benz and even the life of Bernie Ecclestone.

This year’s Central Feature is one that is sure to resonate with British motoring enthusiasts, as for the first time Aston Martin will be in pride of place over the Hill.

"It's absolutely wonderful that Aston Martin will star for the first time on the Central Feature at this year's Festival of Speed, presented by Mastercard,” commented the Duke of Richmond.

“Seventy years ago, Aston Martin first raced at Goodwood and, 10 years later, our histories were forever linked when it sealed the 1959 World Sportscar Championship here at Goodwood Motor Circuit in September of that year. It was also in 1959 that Aston Martin launched its works at Newport Pagnell – so 2019 is a perfect time for us to celebrate Aston Martin's past, present and future success."

Gerry Judah’s professional relationship with the Duke of Richmond began when the Duke worked as one of the top commercial photographers in the UK and Judah was a set designer. When the idea occurred of creating a focal point for the burgeoning Festival of Speed, the Duke then turned to his collaborator to turn the idea into a towering metal reality.

Judah says: “The process can take anywhere between four to nine months. It all depends on how soon the featured marque gets involved. I will then sit down with the company to get an idea of what they want to express, their spirit and vision.”

Thanks to his own trained eye and deep personal involvement in every aspect of the event, the Duke of Richmond is very active in the process of evolving each design. “There is definitely a form of collaboration with the His Grace. Because of our history, there's a lot of dialogue as we both know where we want the Central Feature to go.”

Often, the Central Features appear to defy physics – such as the 52-metre Porsche sculpture in 2018, which rose from a steel spine just 12 centimetres in diameter. Yet as Judah points out, physics cannot be cheated despite all appearances to the contrary.

“Every Central Feature is built by closely working with engineers and fabricators,” He said. “It’s vital to collaborate on a project this size this to ensure the Central Features are structurally sound and can withstand the elements for several days.”

The Central Features are also constructed using innovative techniques. The 2015 Lotus Central Feature was built by welding 6mm flat metal sheets together. “The way we cut and welded the sheets together created a stiff monocoque. The shape and skin of the Central Feature became its structure,” Judah explains. The 3D infinity loop design was made up of 11 sections, transported by articulated lorries and a police escort.

With 21 Central Features to his name, it’s difficult to pick a favourite, but for Judah it is the 2011 Jaguar E-Type Central Feature, celebrating 50 years of the E-Type: “It was just a very holistic design.” Made up of 150 tonnes of painted 12mm steel, the Feature rose to the height of 28 metres. The metal, previously used in gas pipes, was donated by JLR owner Tata Steel, with the entire sculpture taking months to install.

The 50 Years of E-Type remains the only Central Feature that has not been recycled. “Jaguar are planning to re-site it in front of their factory,” Judah says.

Although the cars are the stars in every sense at the Goodwood Festival of Speed, Judah is pleased to have given context to the Central Feature through his work. Rather than concentrating on the type or make of the cars that he is representing, he has always sought to convey what the subject means in a much broader sense.

“They represent dynamics, speed, engineering and celebration – everything the Festival stands for," he said.

This year’s Central Feature will be unveiled to the public on the opening day of the Festival, 4th July.