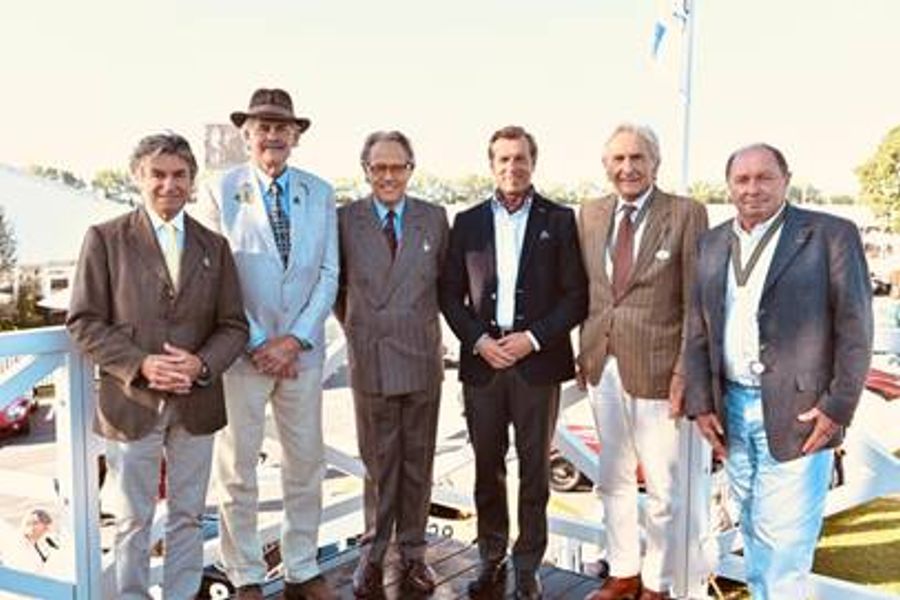 A full house of VIPs and members of the media were at the Race Control building at Goodwood Revival on Saturday 14th September 2019 for the annual Credit Suisse Historic Racing Forum.

Before track action officially got under way, the panel of Derek Bell MBE, Jochen Mass, Alain de Cadenet and Professor Gordon Murray CBE shared their memories of the 1970s. The racing legends provided a unique insight from the perspectives of driver, designer and team owner.

It was a decade in which Bell took the first of his five Le Mans victories, Mass won the Spanish Grand Prix – and both men competed with huge success in single-seaters, saloon cars and sports cars. De Cadenet scored a number of giant-killing results in the World Sports Car Championship, and Murray thrived in a period of great technological advances – designing the legendary Brabham ‘fan car’ as a rapid response to the ground-effect Lotus 79.

Respected broadcaster Bruce Jones hosted the lively forum, which opened with evocative stories of the Nürburgring Nordschleife. Mass, who could have won the 1976 German Grand Prix there, recalled that it was ‘the best in the world – just fantastic’, while Bell said that, as a driver, you were ‘over the edge quite frequently.’

‘I don’t believe you ever did the perfect lap there,’ Bell continued. ‘If you said you did, you were lying!’

The 1970s was a decade in which Gordon Murray’s genius was given free rein after he joined Bernie Ecclestone’s Brabham team. ‘I knew I was chief designer,’ he said with a smile, ‘because when I turned around there was no one else in the office!’

‘It was the best decade for me as a designer because there was so much freedom. You could have an idea one day, draw it the next day, get it on the car and go one second quicker. I’d hate to be doing it now, chasing tenths of a second after hundreds of days in the wind tunnel…

‘There were four circuits that I really wanted to win on – the Nürburgring, Monaco, Spa and the old Interlagos. In 1975, we finally won at the ’Ring. That was the only circuit where we set up the cars to fly, because of all the jumps. If you had too much rear wing on the car, the nose would come up when it was in the air…’

It was also a decade in which a privateer such as Alain de Cadenet could take on – and beat – the mighty factory teams. ‘You could do things as amateurs that you can’t do today,’ he said. ‘It was dangerous, for sure, but it was so much freer.’

Credit Suisse was delighted that the Duke of Richmond made a welcome appearance to the Forum and His Grace shared fond memories of a decade in which the Goodwood Motor Circuit was officially closed to racing: ‘I used to ring up the Control Tower then drive round in whatever car I had at the time. People used to be here testing – sometimes illegally! By the time we knew they were here, they’d gone. It’s amazing that we’re all back here at Goodwood 40 years later.’

We have a recording of the full forum and will trawl through it in the next few days to bring you more of the gems that were casually dropped into conversation by the panel!