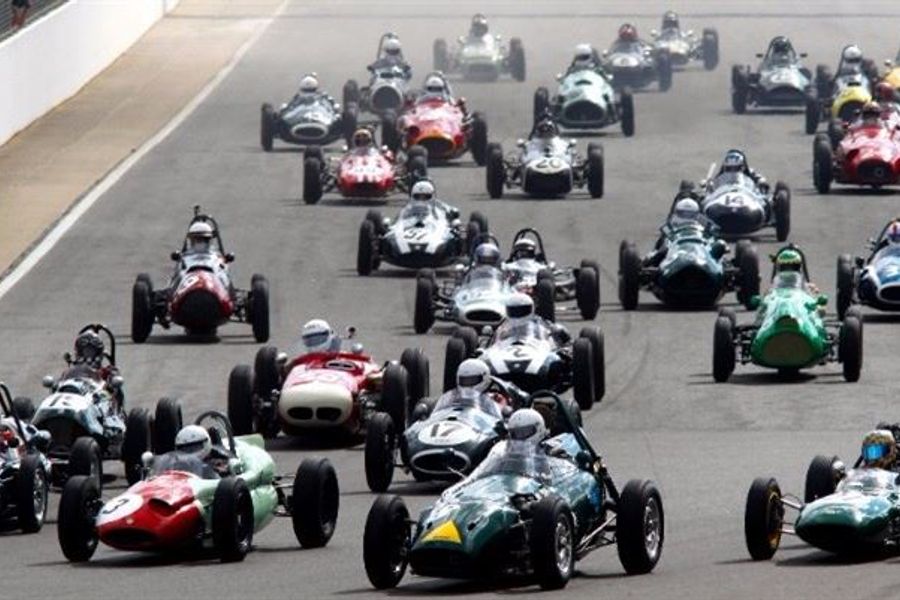 Grand Prix cars, Le Mans racers, classic saloons and a real ale pub are just some of the elements that make the Silverstone Classic so popular and all of them will be making an appearance at Historic Motorsport International (23rd to the 26th of February) at ExCeL, London, as the world’s largest festival of classic motor racing meets the world’s newest exhibition dedicated to the sport.
With more than 1,000 entries representing the finest historic racing in Europe, the Silverstone Classic is a must-do event held at the famous Grand Prix circuit every July. To highlight the sheer scale of the event, the Classic will be taking pole position at the inaugural HMI with a substantial display that underlines the event’s diversity.
Among the cars to be shown are a Ferrari Dino 246, the last front-engined car to win a Grand Prix, an iconic JPS Lotus 87 DFV-powered F1 car from the 3-litre era, a Ross Brawn designed Group C Jaguar XJR-14 and a Pre-War sports car. There will also be a diminutive Austin A35 racer representing the packed one-make grid that will be raced by professionals and celebrities at the Classic.
Visitors to HMI will be able to gaze not just at the machinery but also at a large screen broadcast of the highlights from last year’s Classic while enjoying a pint of Silverstone Real Ale from a pop-up Scarf & Goggles pub.
“The Silverstone Classic is a wonderful event packed with iconic cars, spectacular racing, displays from more than 100 one-make car clubs and a whole lot more besides. We are delighted that HMI can play host to a preview of the event and visitors can look forward to meeting up at the Scarf & Goggles to ensure they really get the flavour of the weekend,” said Ian France, Show Director, HMI.
Aimed at anyone involved in or interested in historic racing and rallying – drivers, teams, event organisers, preparation experts, promoters, marshals and spectators – among the exhibitors lined up are the sport’s governing bodies, leading organising clubs including Motor Racing Legends; the Historic Grand Prix Cars Association; Masters Historic Racing; Historic Motor Racing News which runs U2TC for Under 2-litre Touring Cars and Pre-1963 GT for classic sports cars; Equipe GTS; the Endurance Rally Association, which runs epic long distance rallies such as the Peking to Paris; and the Classic Sports Car Club.
Special features at the show also include the HSCC celebration marking 50-years of Formula Ford while Cosworth will be celebrating the golden anniversary of its all-conquering Cosworth DFV F1 engine.
An open forum on Thursday and Friday, the Historic Motorsport Conference Programme – hosted in the show’s Supagard Theatre by motorsport broadcaster Henry Hope-Frost – will debate a wide variety of topics including Scrutineering & Eligibility, Driving Standards & Safety and the Promotion & Marketing of historic motorsport, with many leading names and contributors set to be announced in January 2017.
Among the other attractions there will be some notable competition cars for sale, ready to tackle the 2017 historic motorsport season ahead.
Silverstone Classic Historic Motorsport International HMI