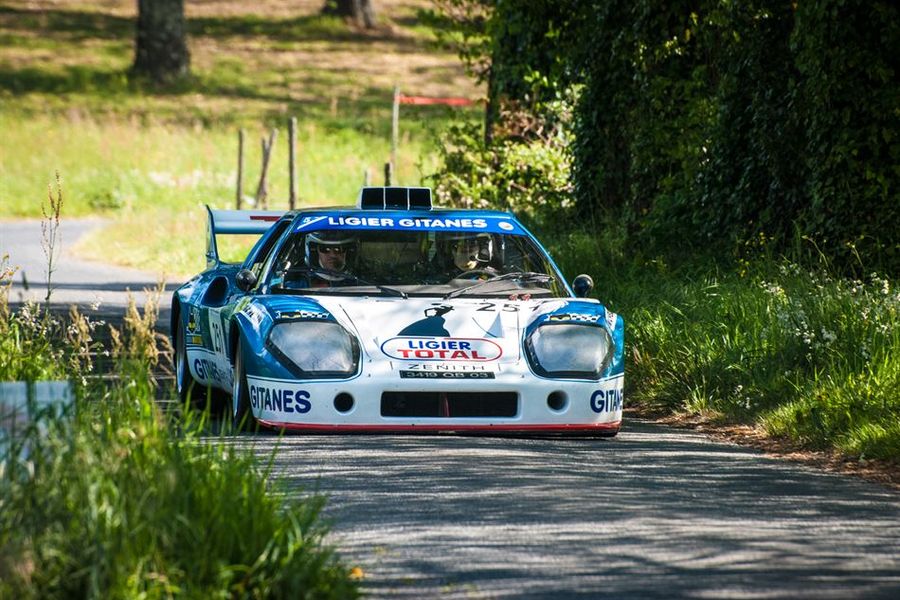 The Tour Auto Optic 2ooo entrants have already covered almost 2000km since they left the Grand Palais in Paris and have had stopovers in Saint-Malo, Haute Goulaine and Limoges. The fourth leg of the Tour Auto Optic 2ooo brought them to Toulouse.
This time the first drivers to take to the roads were those entered in the Regularity section so they were the first to receive a warm welcome from the public massed at the foot of the Arnac-Pompadour château, one of numerous jewels in the Correze department, before the first special of the day – Beyssac - an opening challenge whose narrow twisty layout left no room for approximation. After a liaison section of 120km the crews tackled the 13.9-km second stage, Saint Céré, the longest in the 2017 event combining fast wide roads with strings of corners taken at speed in uphill and downhill sections – all the right ingredients to test the drivers’ bravery!
Once the special stages were done and dusted the drivers went to the Abbaye de Loc-Dieu, a magnificent Cistercian building dating from the XIIth century that had been fortified in the XVth, to relax and have lunch in a peaceful setting amid lush greenery. They then set out for the Albi-Le-Séquestre circuit created in 1959, the second oldest in France through which the Tour de France Automobile passed on many occasions. On this 3,565 km track comprising long straights, chicanes and quick corners the drivers could show off their skills behind the wheel and unleash the full power of their cars. At the end of the fourth day which basked in glorious sunlight for most of the time, a first since the start, the Tour caravan set off for the parc fermé on the Esplanade Georges Vallerey in Toulouse (the “pink” city!).
In the overall Competition VHC category classification British crew Andrew Smith and James Cottingham in their Ford GT40 consolidated their first place by winning two of the three events of the day. They now have a lead of 3m 47sec over Frenchmen Ludovic Caron-Denis Giraudet (Shelby Corba 289), winner of the Saint-Céré stage, and 5m 32sec in hand over Raphael Favaro-Lucien Charles Nicolet (3.8-litre E-Type Jaguar). Jean-Pierre Lajournade-Christophe Bouchet (3.8-litre E-Type Jaguar), winners of the 2016 event, were forced to retire when their engine expired after the Saint-Céré stage.
Daniel Viard-Didier Haquette (Ford Escort MK1RS 2000) now lead the Competition G1 & G2 category while Mr. John of B-Sibel in their Ligier JS2 DFRV remain in control of the H1, H1 & I category. In the Regularity section Jean-François and François Nicoules (Studebaker Coupe Champion) and Gaëten Demoulin-Mathieu Sentis (Peugeot 204 coupe) are in first and second places in the overall provisional classification followed by Georges-Henri Meylan-Julien Stervinou (Alpine Renault A110 1800 Gr IV).These positions are likely to be completely reshuffled in the last day’s racing as the first five are covered by a mere nine seconds!
Saturday sees the fifth and last leg of the 2017 Tour Auto Optic 2ooo and the crews will travel from Toulouse to Biarritz over a 588-km route with a single special stage, Col des Ares, and races on the Pau Arnos circuit followed by two nighttime stages on Saturday/Sunday to round off the event.