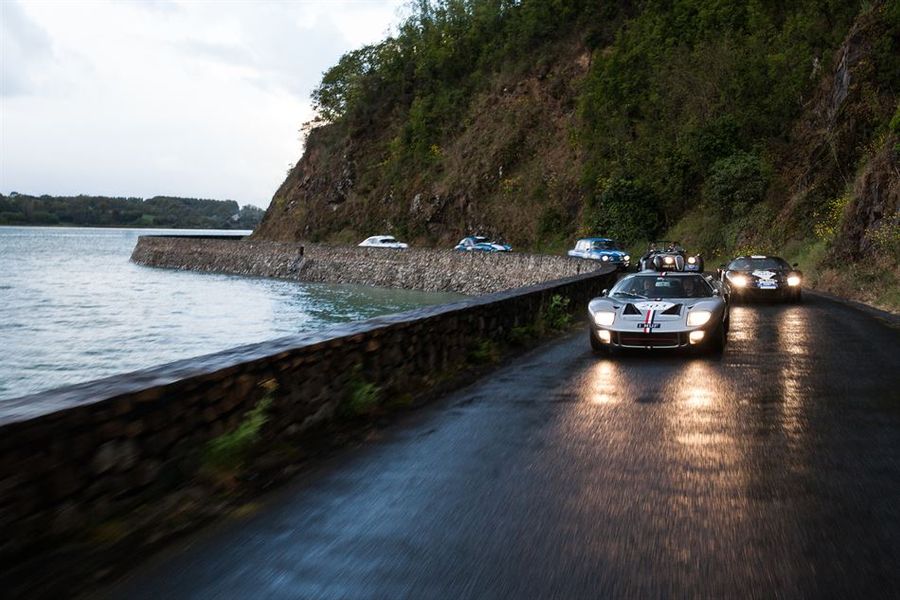 With this staging of the Tour Auto Optic 2ooo seeing it visit the roads of Brittany for the first time, it was duty bound to give its entrants the widest possible vision of the landscapes typical of this peninsula on day two. Thus, having left Saint Malo and the Channel coastlines behind, the route for the second leg (540 km) took the entrants south crossing moors, patchwork farmlands and forests to reach the Atlantic and the peninsula of Port Louis and its citadel which bears witness to the history of Brittany in the 16th and 17th centuries and guards the waters of the port of Lorient.
On a spot facing the ocean the competitors enjoyed a lunch that was rich in sea food with traditional Breton music from the Pont de l’Abbé region playing in the background; they then took to the road again and headed for the finish of the second leg in Haute-Goulaine. Later on they settled down to a gastronomic buffet in the Château de Goulaine, a building dating from the end of the Middle Ages-early Renaissance, which houses a collection of 600 items retracing the history of the famous biscuit, petit Lu!
Three special stages were on the menu of the second leg of the Tour Auto Optic 2ooo in Brittany. The first, Saint-Goueno-Le Mene, took place in a mixture of hail and snow so the drivers had to be pretty careful on the twisty sections of undulating road before unleashing the horses as they tackled the fast final section. The morning’s second stage, Les Roches du Diable, literally the Devil’s Rocks, lived up to its name as numerous drivers came to grief on the wet roads that wound their way through a little valley between Finistère and Morbihan.
In the afternoon the cars raced in the third special, Rochefort-en-Terre-Pluherlin. It consisted of a string of minor roads which gave the crews no respite and they all praised the quality of the day’s stages.
At the end of the interlude in Brittany English crew Andrew Smith-James Cottingham in their Ford GT40 increased their lead in the overall Competition VHC classification. They now have 2m 17sec in hand over French duo Jean-Pierre Lajournade-Christophe Bouchet in their 3.8-litre E-Type Jaguar and Swiss pair Raphael Favaro-Lucien Charles Nicolet in another 3.8-litre E-Type Jaguar.
In the G1 and G2 category Jorg Richard Lemberg-Louis Lemberg lead the classification in their Alfa Romeo 1750 GTAM. Mr. John of B in his Ligier JS2 DFV still holds first place in the H1, H2 and I category. In the Regularity section three Ferraris fill the first three places in the overall classification. The 250 GT Lusso of Frenchmen Eric Hamoniau-Arnaud Dernoncour leads the 250 GT Berlinetta of Argentineans Martin H. Sucari-Francisco Sucari and the 275 GTB 2 of their fellow-countrymen, Alejandro Oxenford-Jose Luis Celada.
Next the crews in the 26th Tour Auto Optic 2ooo will leave the Château de Goulaine to cover the 392-km third leg, which includes two special stages and races on the Val de Vienne circuit before they arrive in Limoges.