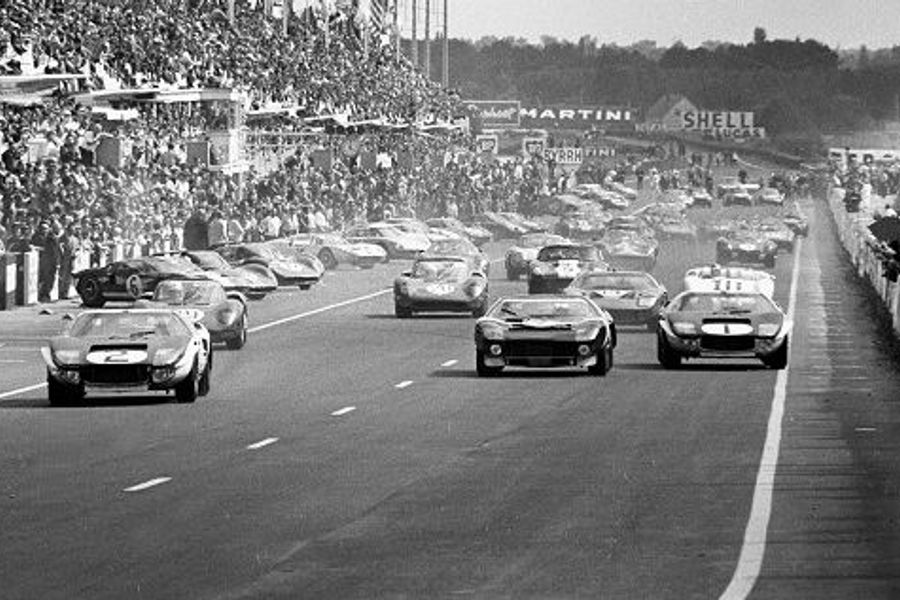 The ‘Village’ at this year’s Le Mans 24-Hour will feature an exhibition devoted to one of the most famous duels in the history of the event, the Ford and Ferrari battles of the 1960s. Put on by the Automobile Club de l’Ouest in partnership with the Sarthe Department and GEFCO in the Le Mans 24-Hours village, the display will feature 15 iconic cars from that era, with a highlight being the a parade prior to the race start on Saturday 13th of June.

With 2015 marking the 50th anniversary of the last victory by a Ferrari at Le Man, the ACO's heritage department has chosen to devote its traditional exhibition of historic cars to the Italian make by highlighting the battle between the Prancing Horse and Ford that lasted four years. IN 1964 Foord arrived at Le Mans with their new GT40s, but reliability woessidelined the new cars, which had showed thier pace by elading early on, and it was the Ferrari 275P of Jean Guichet and Nino Vaccarella that took the Italian marque's fifth consecutive win in the race.

A year later both manufacturers arrived at Le Mans with new challengers, Ford had raised the ante with the MKII - a modified GT40 chassis with a seven-litre V8 - while Ferrari had the four-litre spaceframe P2. In the race Ford challenge crumbled, the Mk IIs out with a variety of 'new car' ailments, while the original GT40s hit cylinder head problems.
Likewise, the Ferrari P2s went out, braking being an issue but engine and transmissions issues finally sidlining the cars, allowing the 250LM of Jochen Rindt and Masten Gregory through to win after early ignition problems.

1966 was finally Ford's year, eight of the more refined MkIIs took the start with a host of big-name drivers on board, and although the Ferrari P3s were leading after eight hours, it was a Ford one-two-three at the end, the car of Bruce McLaren and Chris Amon taking the win. The next year again Ferrari responded with a sophisticated pure racer, the gorgeous four-litre V12 P4, and against the Ford onslaught it fought valiantly, so that by the end the P4 of Ludovico Scarfiotti and Mike Parkes was only beaten by the all-American MkII of AJ Foyt and Dan Gurney.

In 1960s’ themed decor not only will a selection of cars from the era be on show but there will be numerous objects and archives from different collections to complete the setting.

They can be seen in the marquee on the Place de l’Ancien Musée in the Le Mans 24-Hours village (entry free), with the Saturday parade scheduled for 12.30pm.