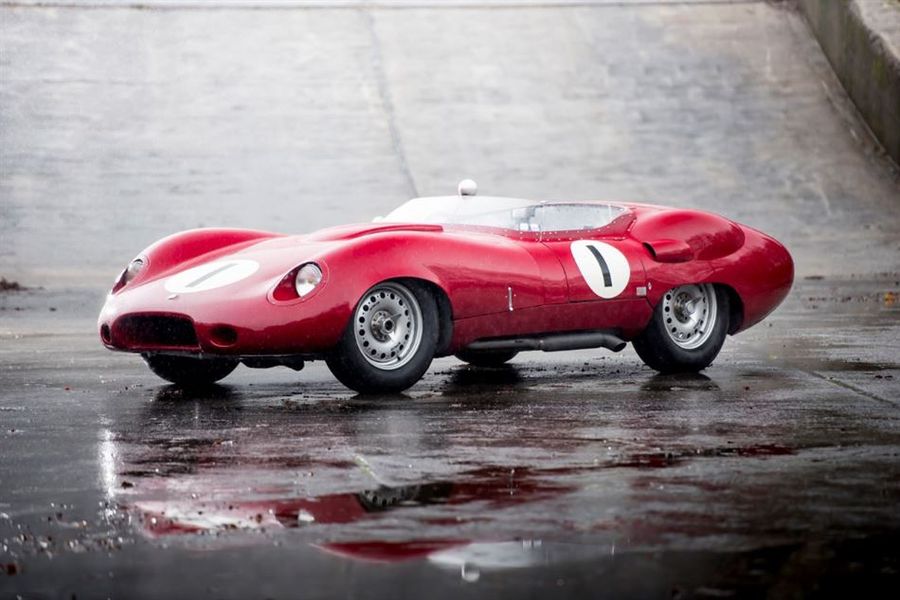 London-based Fiskens have acquired and now have for sale a 1959 Lister Costin Chevrolet which was the prototype Lister Streamliner, designed by Frank Costin, chassis number BHL 121.
Costin was approached by Lister to bring his aerodynamic prowess to bear on their cars for the 1959 season, which was to include running cars at Le Mans, and the car offered for sale is the 1959 prototype Lister Streamliner, with the bodywork shrouding the wheels and featuring a more streamlined overall design. Costin wanted to produce a new and lighter multi-tube spaceframe for the new cars but that time consuming to design and produce so the new bodywork was used on chassis to the existing design.
BHL 121  achieved a higher top speed then the earlier Knobblies, being the first Costin to leave Cambridge with the Chevrolet OHV V8 engine, along with notable gains in road holding.
The car was purchased by John Ewers in 1959 and campaigned during that season at Crystal Palace (as number 64), Silverstone (wearing number 1) and in the following year at the Goodwood B.A.R.C. Members’ Meeting (number 98), where it entered both the Whitsun Trophy and Whitsun handicap races. In 1960, the Lister then departed the UK for Rhodesia, where it was bought by a Mr. Jimmy de Villiers, who had it campaigned in anger by driver John Love.
BHL 121 passed between a few further owners in South Africa until it was purchased in the 1980s by the well-known former Lotus engineer Cedric Selzer , following which it was raced in the US by David Beckett. Eventually, the Lister went to the Hart family for a period of fifteen years, where it was looked after, restored and raced by Tony Garmey of Horizon Racing. BHL 121 enjoyed success in Garmey’s hands, winning many West Coast vintage races. BHL 121 was latterly returned to the UK following an exacting restoration by Californian-based Canepa Design and is now run and maintained by renowned race preparers, Hall and Hall. The current owner has raced the Lister, including at the Goodwood Revival in 2015 and 2016, the Goodwood Members’ Meeting in 2015 and the Donington Historic Festival in 2016.
For further information see Fiskens' website: http://www.fiskens.com/cars-for-sale/Lister-Costin-Chevrolet/12450.htm