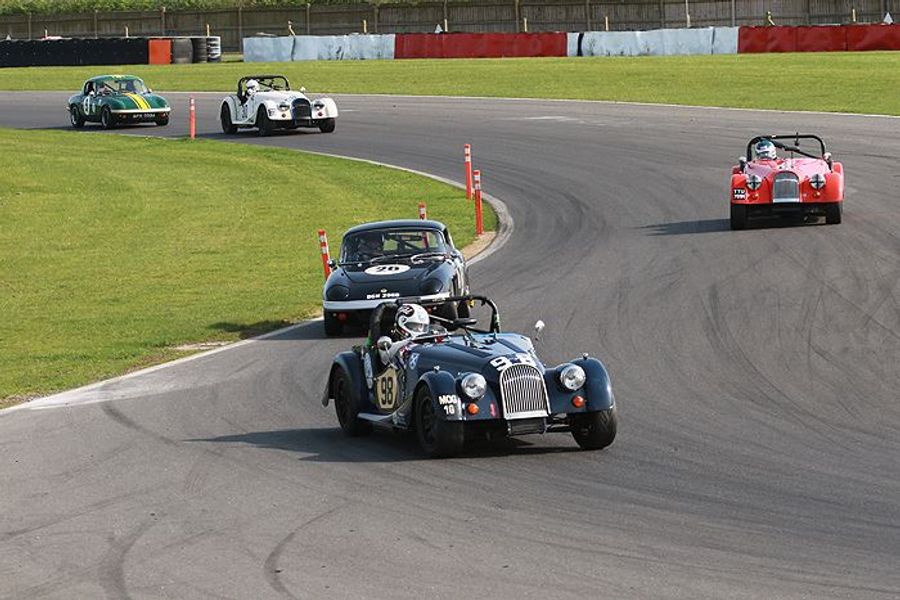 Some tremendous racing from the Historic Road Sports Championship contenders capped the day as the Historic Sports Car Club organised the racing on the Snetterton 200 circuit on Saturday (21st April).

Warm spring sunshine, an enthusiastic crowd, largely incident free racing and slick organisation all added up to an excellent day’s racing at the Norfolk venue.

The Historic Road Sports Championship, now into its 24th season, delivered a strong field headed by the mighty Morgan Plus 8s although a fuel regulator problem in qualifying sidelined Richard Plant.

However, if fellow Morgan racer Kevin Kivlochan thought that Plant’s withdrawal was going to give him an easier time, he was wrong. Not only did John Davison’s Lotus Elan take the fight to Kivlochan, but fellow Morgan racers Jonathan Edwards and Robin Pearce helped make sure Kivlochan had to fight all the way.

Davison constantly challenged Kivlochan over the first half of the race, trying to pressure the leader to overheating his tyres. Davison finally got his chance and nipped by under braking for the Esses but moments later had a big slide at Murray’s and ran wide. “I’d worked the brakes hard into the Esses and I hadn’t pumped the pedal back up,” said Davison. “John was all on me all over the place,” said Kivlochan.

The Elan dropped to the back of the lead quartet as series newcomer Edwards took up the challenge on Kivlochan. It was very close over the final laps and the margin was less than a fifth of a second at the flag with the recovering Davison chasing hard in third after a tremendous race of changing fortunes.

Davison jumped ahead of Kivlochan early in the second race and was able to keep Kivlochan at arm’s length to bag his second win of the season. Edwards and Pearce battled throughout as Jonathan Rose and Larry Kennedy rounded out the top six in their Lotus Elans.

The hour-long Guards Trophy race was an absorbing affair and the result was in doubt until the very close of the 42-lap race. After transmission dramas with his own Chevron B8 in qualifying, Philip Nelson shared the similar car of Charles Allison in the race and Nelson was at the wheel in the closing stages as he eased his pace over concerns about fuel running out.

The Chevron was under major attack with a lap to run after John Waggett and Peter Needham pushed Waggett’s Lenham into contention from the back of the grid. Sadly, Needham was out with a lap to go after the Lenham finally ran out of fuel. At the time, Nelson was nursing the B8 on the last drops in the tank. Jeremy Deeley and Guy Sheppard deserved a podium place after a stirring drive, but their Rawlson was hit by a major misfire with two laps to run and so it was the Chevron B6 of Nick Thompson/Sean McLurg that eventually took second from the Elva Mk7S of Nick Pancisi. Bob Brooks was right in the thick of the contest over the first half of the race before retiring his Merlyn Mk6 with a serious lack of brakes.

In the GT class, John Davison completed a good day by taking his Lotus Elan 26R to a resounding victory as Paul Tooms (Elan) and Vicky Brooks (TVR Griffith) completed the GT podium.

Local racer Jeremy Clark made his mark in 70s Road Sports with a resounding double win in his Lotus Elan but his tasked was eased when Charles Barter hit gearbox trauma in the Datsun 240Z and limped home third in race one behind Will Leverett’s Lotus Europa. Howard Payne (Europa) recovered well from an early delay to chase Barter to the finish. Barter missed the second race as Clark went clear of Will’s dad Mark in another Elan. Leverett junior completed the podium but was not too far clear of Payne at the finish.

It was a good day for Ford Mustang racer Mark Watts not only recorded his first trip to a race podium, but ended the day with a double Historic Touring Car win. In both races Bob Bullen snapped at heels of the Mustang in the corners, only to be left for dead on the two long straights. To his great credit, Bullen never stopped chasing the Mustang and was only a couple of seconds behind at the end of each race.

Rob Wainwright was typically spectacular in his Austin A40 and claimed a mighty third in the opening race after battling ahead in an entertaining four-way contest, while Adrian Oliver got his Imp ahead of the A40 to take third later in the day.

John Harrison (Mallock Mk21) scored a Classic Clubmans double as his major rival Mark Charteris (Mallock Mk20/21) had a terrible day. A broken halfshaft in race one left Charteris stranded on the grid and then at the back of the grid for race two. In no time at all Charteris tigered through the pack to take the lead, but then his engine grenaded after six laps and his race was over.