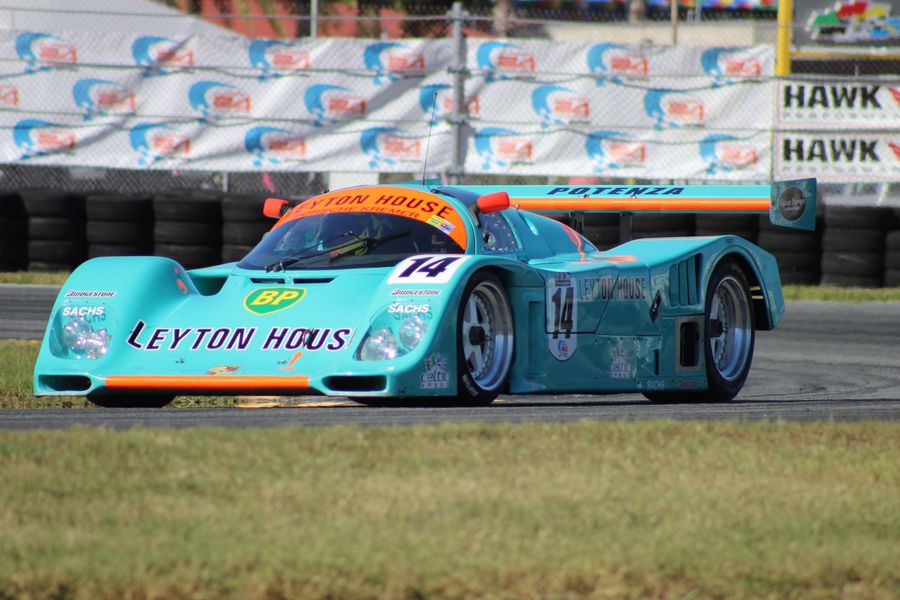 Entries from around the world and as close as just an hour away from Daytona International Speedway (DIS) have recently been filed with Historic Sportscar Racing (HSR) for the 2018 HSR Classic Daytona presented by IMSA, the classic 24-hour race that returns to the "World Center of Racing" for the fourth time at DIS, November 7 - 11.

Recent entries include two from United Kingdom-based Celtic Speed that is adding a second race car this year alongside its two-time Group C class-winning 1987 No. 14 ex-Kremer Racing/Leyton House Porsche 962. Tommy Dreelan and Aaron Scott co-drove the pristine Porsche to victory in the inaugural Classic Daytona in 2014 and scored a repeat win in last year's third edition of the classic 24-hour race.

Dreelan and Scott are back in 2018 and this time will compete in both the 962 and a debuting Oreca FLM09 Prototype Challenge (PC) entry from Celtic Speed. The multi-class effort gives Dreelan and Scott and unprecedented chance of picking up a third and even fourth Classic Daytona class victory at this year's race.

"Daytona is a classic circuit with a combination of banking, oval and infield that makes it a dream circuit, especially at night," Dreelan said. "I'm really looking forward to running in both classes. The goal is to finish in both, but to make it to both podiums would be extra special. It will be very busy, and between Aaron and myself, the seat time will be like a contemporary 24-hour race. We can't wait for it to unfold."

The black and white 2009 No. 68 Celtic Speed Oreca FLM09 is one several recently retired PC and Daytona Prototype race cars that have become quite popular in recent years with HSR competitors.

"The PC cars looked very competitive in their race last year, so I'm looking forward to seeing where we are," Scott said. "It's going to be fun racing both cars, and this will certainly keep us busy through the 24-hour period. It is our first time with the PC car in Daytona, but we have experience with it in Europe.

“It will be very special to pull off a double win, but these kinds of races are tough, so we are doing our best to arrive prepared. Our first target is to finish, but of course we want to finish well, so we will be ready for the fight. There's no better place to be at Daytona than out on the circuit, so it's going to be mega!"

Scott is a professional driver who has won recently in European Le Mans Series competition and co-drove to a second-place GTE-Am finish last year in the 24 Hours of Le Mans. Even with the contemporary racing success, he still considers the Classic Daytona a standout event on each year's racing schedule.

"Daytona is a special place, rich in motorsport history, and with a unique atmosphere," Scott said. "Racing some of the iconic cars that are a part of that history in this event is very exciting and a huge privilege. The Classic 24 Hour has grown into one of the big races in historic motorsport, so for many, including ourselves, it's a season highlight.

While Dreelan, Scott and Celtic Speed will join many other competitors in traveling from Europe for the Classic Daytona, some others will make the journey to DIS from a little bit closer to home.

David Russell and his Automatic Racing team are based in nearby Orlando, Florida, only about an hour from Daytona Beach. He will be pulling some double duty of his own again this year in the Classic Daytona, but Russell's dual roll comes as both a driver and team owner. He and Automatic Racing will field some of the most colorful competitors and classic race cars participating in this year's Classic Daytona.

"I have a really colorful customer by the name of Steven Davison," Russell said. "He's Scottish-American, and he is going to run his Aston Martin Vantage GT4 with a young Scottish driver named Finlay Hutchison, a nice young man and real quick kid. Finlay has won some GT4 stuff over there in an Aston Martin and a McLaren.

“We met him at the Le Mans Classic earlier this year when we did the one-make support race, which featured Aston Martin, and Steven hit it off with him. He invited him over, it will be his first time ever to the U.S., and he is going to be racing at Daytona."

Davison and Hutchison will co-drive the 2007 No. 22 Aston Martin Vantage GT4 while Russell, an accomplished driver in his own right, may join Davison at the wheel of one of the oldest cars in the race.

"Steven also has a 1962 Jaguar low-drag E-type," Russell said. "It's a beautiful car, and I will probably get the opportunity to drive that with him in the Classic Daytona. It's a Goodwood-approved, properly-done car and absolutely gorgeous. I was a little leery driving it the first few times I raced it. So, Steven will be racing in two different groups, doing double duty and getting plenty of track time."

The blue 1962 No. 2 Jaguar XKE raced last year at DIS in the Daytona Historics schedule that preceded the Classic Daytona, but this year Davison and Russell will take up the challenge of competing in the 56-year-old Jaguar in the full classic 24-hour race for the first time.

"The entire experience is very raw," Russell said. "It reminds of the first time I raced in the Rolex 24 in 1993. It takes me full circle because I grew up with a father who loved the D-Type Jaguars. He was at Sebring the year the D-Types won, so to get to race Steven's low-drag E Jaguar today is about as close as you can get to that thrill. It's an incredible experience for sure."

Russell's on-track duties at the Classic Daytona extend beyond his own Automatic Racing team. For the fourth-straight year he co-drives with Dick York in his silver 1973 No. 42 BMW CSL prepared by Heritage Motorsports.

"I will be back in Dick York's BMW that is an absolute blast to drive," Russell said. "Plenty of power but all manual, so it's a pretty physical car to drive, but really rewarding. It's really fun, and the preparation is very good, so it just keeps on running. I have run with Dick in the Classic Daytona every year, we won our class the first time, and hopefully we will have some more CSLs out there and we can have another good race like we have before."

Debuting in 2014, the HSR Classic Daytona presented by IMSA once again features this year period-specific groups of historic and vintage sports cars competing twice-around-the-clock on Daytona International Speedway's 3.56-mile road course. The event weekend is set to take place this November 7 - 11 with practice, qualifying and Daytona Historics HSR WeatherTech Sprint and B.R.M. Enduro Challenge races preceding the Classic Daytona, which is scheduled to start at 1 p.m. ET on Saturday, November 10.