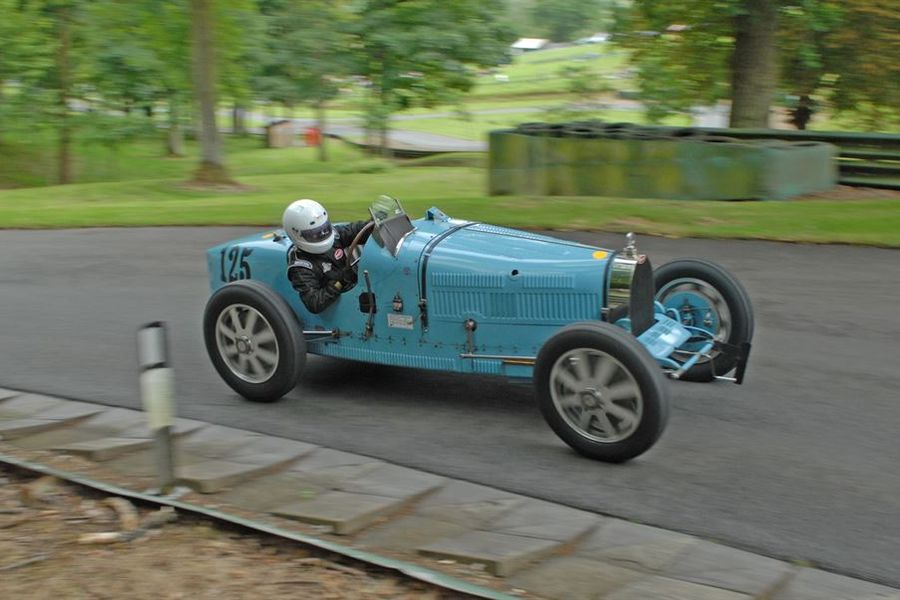 The Bugatti Owners Club, with the support of the historic Bugatti Trust, will showcase a unique collection of nine original Grand Prix Bugattis at the Lancaster Insurance Classic Motor Show, with Discovery, held 10th-12th November at Birmingham’s NEC.
From the first ‘Grand Prix’ Bugatti, the Type 35 introduced in 1924,  through an ex-Richard Shuttleworth twin overhead camshaft supercharged Type 51 to the Type 59, the final race Bugatti of the pre-war era, the cars will demonstrate the engineering quality the marque was famous for.
Each Bugatti on display claims a significant racing history both pre- and post-war. For the younger enthusiasts, four original Factory built ‘Baby’ Bugattis are assembled on a mock racing grid which will fit in well with the overall show theme of ‘Family Ties’.
A feast to the eyes for all ages, the vintage Grand Prix Bugattis confirmed for display include the Type 35, 35A, 35C, considered to be the most successful of the Bugatti racing models, the Type 37 and 39 derivatives, Type 51, 54 and 59, which succeeded the Type 35 as Bugatti's premier racing cars for the 1930s.
The Bugatti Trust is an independently funded educational charity dedicated to the study of the works of Ettore Bugatti. It was formed in 1987 by the late Hugh Conway supported by a small group of Bugatti enthusiasts. The original archives were based on his remarkable collection of historic material including thousands of technical drawings, photographs and historic documents which are available for academic and educational research.
Housing a permanent display open to the public all year round with vintage Bugattis and racing memorabilia, the Bugatti Trust also presents special exhibitions such as ‘Bugatti Bikes and Bicycles’ and ‘Louis Chiron The Man’. A key objective is to encourage young engineers and designers and the Trust runs regular STEM (Science Technology Engineering Maths) workshops offered for free to visiting families.
To further celebrate the ‘Family Ties’ theme of the show, Bugatti Trust will have some educational activities for children based on the stand’s display of outstanding historic GP cars in Hall 1, Stand 32..
Acting Show Director Lee Masters said: “We are honoured to host such an amazing line-up and can’t wait to see the visitors’ reaction to these amazing machines that helped shape motoring and motorsport history.”