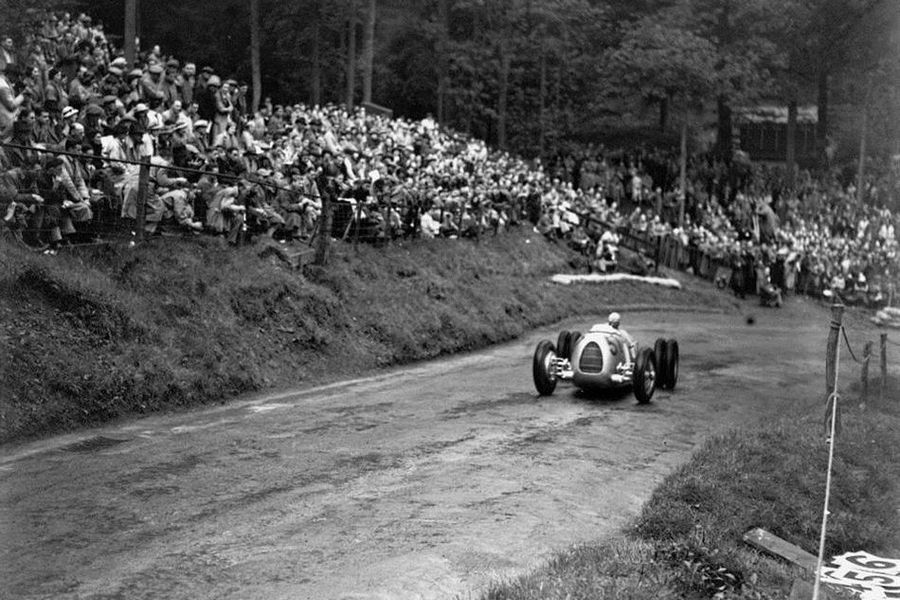 Picture Credit: Shelsley Walsh Archive.
Shelsley Walsh hill climb this weekend hosts the Classic Nostalgia event during the 111th anniversary year of the historic venue. Looking back at motoring from over many decades, a huge variety of very famous and classic machines from Mini, Porsche, Austin, Lotus, Cooper and Bugatti will be in action on the iconic Worcestershire hill over the two days, which also sees a full capacity entry.
The star attraction will be the 80th anniversary appearance of the mighty V16 Auto Union Grand Prix car first driven at Shelsley Walsh in 1936 by Hans Stuck and to be driven once again this weekend by his son Hans-Joachim Stuck, well-known former Formula One and Le Mans racer, who has said that he is honoured and proud to be driving this car at Shelsley Walsh.
Committee member of organisers, Midland Automobile Club, Tony Harrison, said: “This promises to be one of the most celebrated events ever staged at Shelsley Walsh and the whole organising team is really looking forward to it. Even though most of the paddock team are well over 70-years of age, they are all highly excited and fully ‘psyched-up’ to ensure that things run as smoothly as possible, because it will be very busy indeed everywhere on site.
“One of the many highlights of the weekend will be the attendance of around 30 Group B rally cars which were banned from competition in the 1980s following several very unfortunate fatal incidents, but which still have an amazing following amongst motoring fans. So we will welcome famous stars including Jimmy McRae, David Llewellin and Russell Brookes, in cars such as the Metro 6R4, Audi Quattro Sport, Ford RS200, Lancia Delta S4 and Peugeot 206 T16.”
A Concours d’Elegance competition sponsored by Classic and Sports Car magazine is being staged for the first 100 cars to enter on the day and this will be judged by national motoring journalist and regular Shelsley Walsh competitor Simon Taylor, with the winning car being invited to display on the MAC stand at November’s NEC Classic Car Show.
Besides the usual serious motor sport action on track, the whole weekend has a festival theme and visitors are being encouraged to arrive in period dress to add to the atmosphere, with prizes being awarded for the best outfits. The Courtyard will resound to live music and dancing from the 1940s and 50s era, personal interviews with guest drivers will take place and a Spitfire will perform overhead on Saturday as part of an air display, also featuring the Trig Aerobatics team on both days.
Picture Credit: Shelsley Walsh Archive Classic Nostalgia Cooper Porsche V16 Auto Union Grand Prix car Mini Lotus Walsh hill climb Austin Bugatti