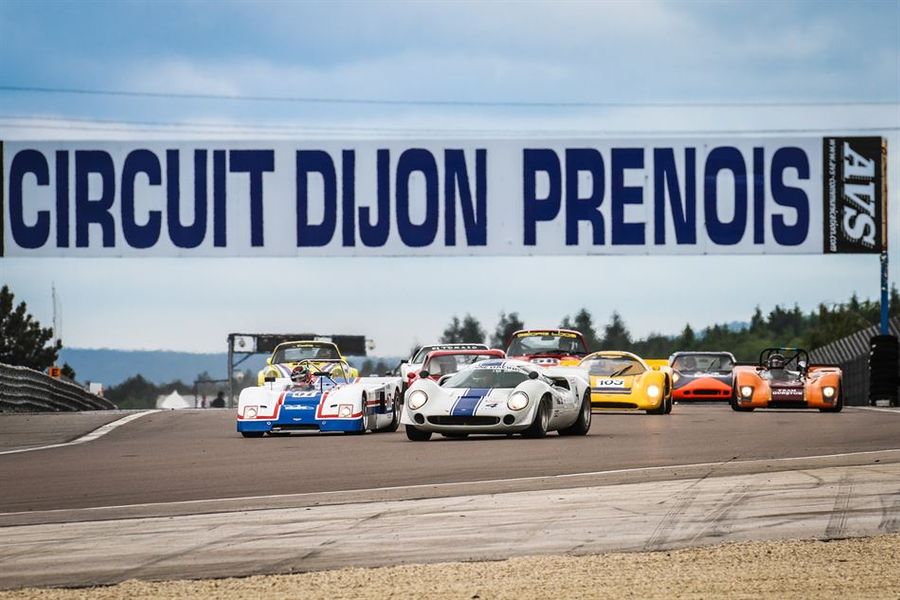 Peter Auto hold their third major race meeting of 2017 this weekend with the Grand Prix de l’Age d’Or celebrating its 53rd anniversary and its 13th visit to the Dijon-Prenois circuit. The meeting features the usual Peter Auto series – the two categories of Classic Endurance Racing, the Heritage Touring Cup, Sixties’ Endurance, Trofeo Nastro Rosso, Euro F2 Classic and the Group C field - as well as two grids from the Historic Grand Prix Car Association, the always entertaining Formula Juniors, and track sessions for the Global Endurance Legends.
Classic Endurance Racing aims to provide a retrospective of endurance races held between 1966 and 1981 and the two grids always feature some great cars. CER1 covers GT cars from 1966 to 1974 and prototypes from 1966 to 1971, while CER2 is GTs 1975 and 1981 and prototypes 1972 to 1981, each having a one-hour race.  Grand Prix de l’Age d’Or has a strong CER1 field with four Lola T70s up against Chevrons B8s, B16s and B19s. Six Porsche RSRs fill out the GT1 field, up against a De Tomaso Pantera and a lone GT40.
CER2 boasts 19 cars, with five two-litre Lolas up against four Chevrons, the B26 of Sandy Watson and Martin O’Connell being a car to watch. Adding variety is the Ferrari 512 BBLM of  Christian Bouriez.
The Heritage Touring Car Cup is for cars eligible for the European Touring Car Championship between 1966 and 1984. The 21-car entry is loaded with Fords and BMWs, with Escorts and Capris up against 3.0 CSLs and 635 CSis.  Variety comes from the Volvo 240T of Andrew Beverley and a lone Luxembourg-crewed Alfa Romeo.
Fifty cars are entered for the Sixties’ Endurance two-hour race with the usual fine mix of pre-63 sports cars and pre-66 GTs including Jaguar E-Types, a pair of Listers, and the usual Cobras and Porsches.
The invitation Trofeo Nastro Rosso sees some classic – and valuable- cars racing under more ‘gentlemanly’ regulations, and at Dijon Heinz Stamm’s Aston Martin DB2 adds joins the  field. Three Maseratis, including a 1955 300S are entered, and a brace of Ferraris, a 250 GT Berlinetta and a 275 GTB 4. A Gordon T15 and a pair of Bizzarinnis are joined by a Porsche 550A and a RSK Spyder.
The Group C series hit a 2017 peak of 20 cars at the Spa Classic but disappointingly only nine are currently entered for the Grand Prix de l’Age d’Or. It is great to see a Porsche 956 out though, with two 962 also listed including the quick Leyton House car of Tommy Dreelan and Aaron Scott. Historic F1 champion Nick Padmore shares a Nissan NPTi-90 with Roland Lewis, and Kriton Lendoudis and Rui Aguas co-drive a Mercedes-Benz C11.
Eleven cars are entered for the  Euro F2 Classic round, the series open to cars that contested the European Championship between 1967 and 1978. Some great looking 1960 cars are expected including Wayne Wilson out in a 1967 BT21C and the sweet Ferrari 166 Dino of Graham Edelman. Two Marches from a later era should be among the pace-setters, Marc Devis  out in a 1978 782, while the later Chevrons, including Martin O’Connell in a 1977 B40, should also be on the pace.
The guest series will also entertain, with 36 of the rear-engined Formula Juniors entered, and the HGPCA brining along 22 front-engined cars and 20 of the later rear-engined single seaters. The Global Endurance Legends, featuring sportscars and GTs from the 1990s and 2000s, will be doing track session over the weekend but not racing.
Friday sees a day of free practice and qualifying, with Group C qualifying early on Saturday morning prior to the opening race, for the HGPCA 1 runners, at 09.30. Four more races and track sessions fill out the rest of Saturday.
First race on Sunday is a one-hour event for the Heritage Touring Car field at 08.30,  with another ten races across the day. The Group C field race each day.