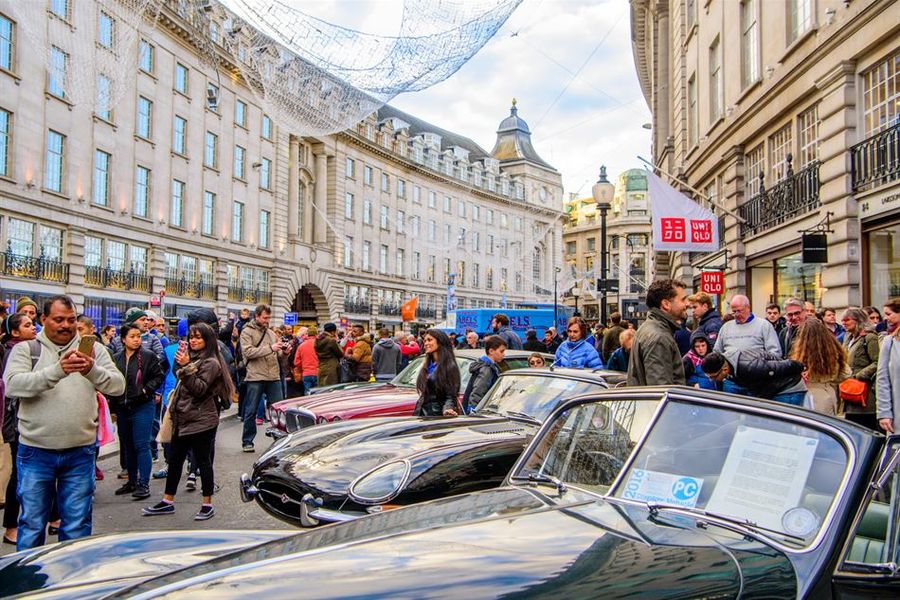 There are at many reasons to visit the Regent Street Motor Show on November 4th, and alongside the historic motorsport element of the show linked to next year's Silverstone Classic, one of the scores of displays filling London’s famous street will celebrate the 60th birthday of the original city car, the diminutive Fiat Cinquecento.

Introduced in Italy in 1957, the ‘Nuova 500’ was marketed as a cheap, functional and economical town car for post-war Italy. At just over 2.5 metres (9 feet) long and powered by a tiny rear mounted 479 cc two-cylinder, air-cooled engine, the little Fiat was an instant hit. Almost four million examples were built during its 18-year production run.

So iconic was the baby Fiat that it was reinvented a decade ago when the company re-introduced its name and shape in the modern 500… though at more than 3.5 metres from stem to stern, the latest version is considerably bigger than the original.

A special display staged by the Fiat 500 Club – itself celebrating its 25th anniversary this year – will depict the evolution of Italy’s ‘people’s car’ with several examples of the saloon and Giardiniera estate on show.

Another significant classic car club display will commemorate the 80th anniversary of the demise of London’s own car company, Talbot. One of the first purpose-built car factories was established in Barlby Road, Kensington where the firm of Clément-Talbot was founded in 1903.

Combining the motor engineering expertise of Frenchman Adolphe Clément and the money and social standing of British aristocrat, the Earl of Shrewsbury and Talbot, the cars were sold as Talbots and incorporated the Earl’s coat of arms in the badge.

They were a huge success on both road and race track – Talbots took third place at Le Mans in 1930 and 1932, while Percy Lambert driving a streamlined Talbot 25 at Brooklands became the first man in the world to cover 100 miles in one hour.

In 1935, however, the company was acquired by the Rootes Group which ceased manufacturing Talbots as an independent brand in 1938 after more than 30,000 cars had been built. The Talbot Owners’ Club will provide a time-honoured display for the Regent Street Motor Show.

First held in 2005, the Show is a unique open-air and free-to-view gathering of cars from just about every decade that the automobile has been in existence. The busy thoroughfare is closed to traffic, and the entire road from Piccadilly Circus to Oxford Circus is full of veteran cars, modern cars, classic cars, supercars, racing cars and motorcycles.

If you do attend, don't miss the Silvertsone Classic stand which, as we have already reported, will feature a range of cars linked to next summer's event.

Held on Saturday 4th November –­ the day before the famous Bonhams London to Brighton Veteran Car Run supported by Hiscox leaves Hyde Park for the annual trip to the coast – more than 100 veterans, with many of the drivers and passengers in period dress, will gather in the middle of Regent Street to take part in the annual Veteran Car Concours.

At the other end of the motoring time scale, Go Ultra Low will be offering test drives in several of the latest low and zero emission electric and hybrid cars from manufacturers including BMW, Renault, Toyota, Kia, Hyundai and Volkswagen.

“Variety is the key to the success of the Regent Street Motor Show and is the reason that it draws such a huge amount of interest each year,” said Nick Wigley, CEO of Show organisers, Goose Live Events. “Where else can you see veteran cars from the 19th century alongside electric vehicles from the 21st century… not to mention rare classic cars from the recent and not so recent past. And all for free”.

It attracts vast crowds keen not only to see the hundreds of veteran and classic cars on display and to take test drives in the latest machinery but also to enjoy the on-street entertainment provided.

The Regent Street Motor Show is the penultimate act in the Royal Automobile Club’s annual London Motor Week – a week in which the Club presents an array of functions and events to suit all motoring tastes, which this year includes its annual Art of Motoring exhibition, the Motoring Lectures, a Motoring Forum, a dinner with FIA President Jean Todt and the Dewar and Simms Trophy presentations, awarded for British engineering excellence. The week culminates with the